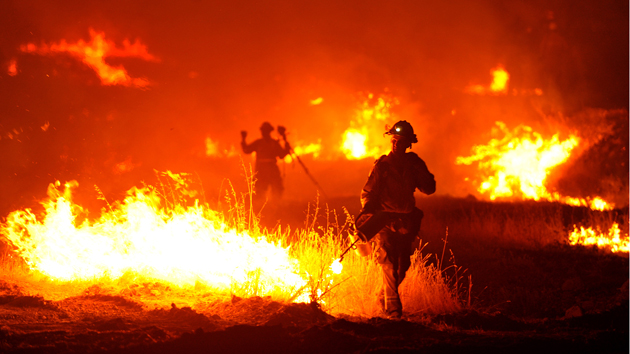 On August 17, 2013—two years ago today—a deer hunter near California’s Yosemite National Park ignored a campfire ban and burned trash from his dinner. The embers blew into dry brush, starting the third worst wildfire in the state’s history. All told, the Rim Fire, as it came to be called, burned 257,314 acres in and around Yosemite.

No wildfires of that scale have occurred since, but, thanks to drought and climate change, California is far from out of the woods. In fact, in 2015, 4,382 wildfires have already scorched a total of 117,960 acres, more than double the five-year average for this time of year. Firefighters have finally controlled the largest two fires, in Northern California’s Jerusalem Valley, but not before the blazes razed nearly 100,000 acres.

The map below, made by California’s wildfire fighting agency, Cal Fire, gives a sense of where these fires are occurring. To read more details about each fire and how much of it is contained today, click on the map’s fire icons or see Cal Fire’s ongoing reports here.

And California isn’t even the state with the most acres burning right now. A blaze in Idaho has consumed more than 200,000 acres so far. In Alaska, wildfires have burned more than 5 million acres this year. This map from the research organization Climate Central shows where wildfires are occurring nationwide: