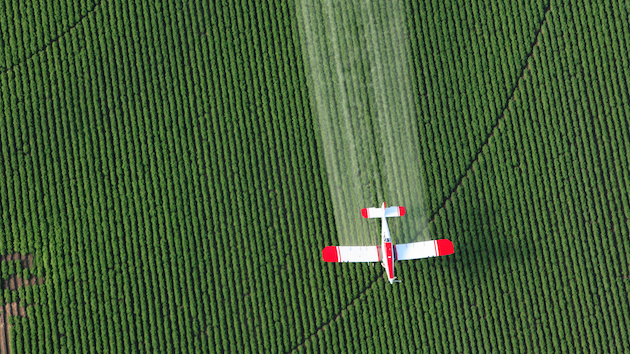 In a fascinating long piece in MIT Technology Review, Antonio Regalado examines the genetically modified seed industry’s latest blockbuster app in development—one that has nothing to do with seeds. Instead, it involves the industry’s other bread-and-butter product: pesticide sprays. But we’re not talking about the poisonous chemicals you convinced your dad to stop dousing the lawn with. The novel sprays in question are powered by a genetic technology called RNA interference, which promises to kill specific insects and weeds by silencing genes crucial to their survival, while leaving nontarget species unscathed.

RNAi, as it’s known, is an emerging science; the two US researchers who discovered it brought home a Nobel Prize in 2006. Regalado describes the process like this:

The cells of plants and animals carry their instructions in the form of DNA. To make a protein, the sequence of genetic letters in each gene gets copied into matching strands of RNA, which then float out of the nucleus to guide the protein-making machinery of the cell. RNA interference, or gene silencing, is a way to destroy specific RNA messages so that a particular protein is not made.

If you can nix RNA messages that exist to generate crucial genes, you’ve got yourself an effective bug or weed killer. And GMO seed and pesticide behemoth Monsanto thinks it has just that. Robb Fraley, the company’s chief technology officer and a pioneer in creating GM seeds, told Regalado that within a few years, RNA sprays would “open up a whole new way to use biotechnology” that “doesn’t have the same stigma, the same intensive regulatory studies and cost that we would normally associate with GMOs.” Fraley described the novel technology as “incredible” and “breathtaking.”

A Monsanto exec describes the novel technology as “incredible” and “breathtaking.”

It’s not hard to see why the veteran agrichemical and biotech exec is so amped for something new to load into a crop duster. Monsanto’s GM herbicide-resistant and insecticidal traits still dominate the highly lucrative US corn, soybean, and cotton seed markets, but these cash-cow products are victims of their own success, so widely used that weeds and pests are rapidly developing resistance to them. The company’s flagship herbicide, Roundup, still generates about $5 billion in sales annually, but it went off-patent years ago, and it was recently declared a “probable carcinogen” by the World Health Organization—a finding Monsanto disputes.

Such concerns are widely seen as the reason Monsanto is so hotly pursuing a takeover of its rival, Syngenta, which focuses much more on pesticides than novel seeds. Syngenta, too, is developing RNAi technology, reports Regalado—back in 2012, it spent $523 million to buy Devgen, a company that had been developing the novel sprays.

However, there’s no reason to assume crop dusters will be strafing farm fields with gene-silencing sprays anytime soon. As Regalado notes, they’re very little studied outside of corporate labs. “So far, only a few scientific publications even mention the idea of RNA sprays,” he writes. “That makes it hard to judge companies’ claims.”

The first obstacle is technological—the problem of “how to get a large, electrically charged molecule like RNA to move through a plant’s waxy cuticle and into its cells,” Regalado writes. That’s crucial, because the technology works like this: A targeted bug—the one drawing attention now from Monsanto is the Colorado potato beetle—chomps on a leaf that’s been sprayed by RNA solution and then, fatally, gets critical genes turned off. To make that happen, you have to get the RNA material into the leaf.

The most promising solution so far is to “encapsulate the RNA in synthetic nanoparticles called lipidoids—greasy blobs with specialized chemical tails,” Regalado reports. “The idea is to slip them into a plant, where the coating will dissolve, releasing the RNA.”

The EPA’s current methods of evaluating new pesticides, which were designed to vet chemicals, might not apply to gene-altering sprays.

This nanotech booster to Monsanto’s new bug killer won’t likely raise red flags from government overseers. As I’ve shown before, both nanotechnology and adjuvants—the compounds mixed with pesticides to help them break into plants—are lightly regulated.

However, the RNAi compound itself will have to be reviewed by the Environmental Protection Agency, which vets new pesticides before they reach farm fields. Early indications suggest the going will be bumpy. Last year, the EPA convened a scientific advisory panel to assess the human health and ecological risks posed by emerging RNAi crop technologies.

The panel concluded there’s “no convincing evidence” that RNAi material poses a threat to humans or other animals—the digestive process likely destroys it before it can do harm. But for nontarget insects in the field, they concluded, it’s a different story. The technology’s boosters claim the technology can target particular pests and leave everything else in the ecosystem alone. The independent scientists on the EPA panel were not convinced. They noted “uncertainties in the potential modes of action in non-target species, potential for chronic and sublethal effects, and potential unintended consequences in the various life stages of non-target organisms.” As a result, they found  “sufficient justification to question” whether the EPA’s current methods of evaluating new pesticides, which were designed to vet chemicals, apply to these gene-altering treatments.

And the technology is so novel that figuring out what those tests should be will be hard— it “cannot be done without a better understanding” of exactly how the technology works, the panel concluded. US Department of Agriculture entomologists Jonathan Lundgren and Jian Duan raised similar concerns in a 2013 paper.

“This is surprisingly reminiscent of Monsanto’s assurances in the ’90s that weeds would be very unlikely to develop resistance” to Roundup, said one critic of the new technology.

One particular concern for the EPA panel was the amount of time RNAi material stays intact after it’s sprayed. Monsanto says not to worry, because “when the company doused dirt with RNA, it degraded and was undetectable after 48 hours,” Regalado reports. But he adds that Monsanto “wants to develop longer-lasting formulations,” noting that another RNAi spray it’s developing for trees was shown to persist for months. “What’s more,” Regalado notes, “Monsanto’s own discoveries have underscored the surprising ways in which double-stranded RNA can move between species”—not exactly a comforting aspect of a technology Monsanto hopes to see widely used on farm fields.

A Monsanto geneticist told Regalado that the company hopes to get its first RNAi spray, one targeting potato beetles, into the market by 2020. The company is also working on an RNAi product to add to its failing Roundup herbicide—one it hopes can turn off the resistant genes in the superweeds now rampant on US farm fields. But that’s well behind the potato beetle product in Monsanto’s development timeline, a company spokeswoman told me.

In addition to its sprays, Monsanto has an RNAi-enhanced corn crop in the pipeline: a corn type engineered to contain RNA that was designed to kill a common pest called the rootworm. It’s “currently pending approval from the EPA,” the Monsanto spokeswoman said. “We are planning for a full commercial launch by the end of the decade, pending key regulatory approvals.”

Doug Gurian-Sherman, a plant pathologist by training who covers biotechnology for the Center for Food Safety, echoed the EPA panel’s concerns.”These are very complex biological systems, and their interactions evolve, and are not static,” he said. “So it is really impossible to predict all the things that could go wrong. That does not mean we should be paranoid about them, but we should be at least reasonably cautious and skeptical about claims of both safety and efficacy, since there is little experience or research to rely on.”

He also questioned Monsanto’s claim, reported by Regalado, that insects won’t likely develop resistance to the RNAi treatments, as they have to most chemical treatments in the past. “This is surprisingly reminiscent of Monsanto’s assurances in the ’90s that weeds would be very unlikely to develop resistance to the glyphosate [Roundup] herbicide…and now we have an epidemic of glyphosate resistant weeds,” Gurian-Sherman said.