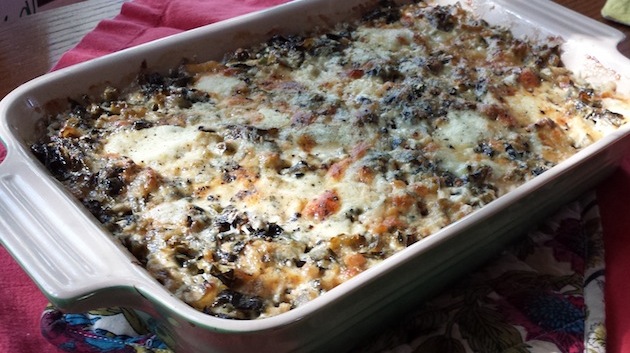 I’m a greens fanatic: mustards, kale, collards, chard, you name it. I eat them in some form more or less every day, sometimes more than once. At this point, a meal—even (or especially) something as simple as a fried egg for breakfast—just seems naked, incomplete, without them. Their ubiquity in my daily life can make them seem unexciting for a special feast like Thanksgiving. Really, again, greens made like I always do them, sautéed with onion until tender and then finished with a lashing of vinegar? At the same time, there was no way I could imagine Thanksgiving without leafy greens—especially since they reach their peak of flavor in the fall.

So rather than forsake them or serve them the same old way, I decided to dress them up into something richer and more elegant: a gratin. To get ideas on how to pull it off, I dug into James Peterson’s excellent 2002 tome Glorious French Food. Along with recipes for the three classic gratins—potatoes, leeks, and squash—it also includes advice on how to improvise one: merely pour cream and cheese over the desired vegetable, and bake in the oven until a “savory crust forms on top.” That’s when I knew that I not only had a winning side dish for the holiday table, but also something dead simple and yet tasty: perfect fodder for a Tom’s Kitchen column.

Peterson advises that in most cases, vegetables should be cooked before the baking stage, “so that the moisture they contain is released during the precooking instead of remaining in the gratin, where it would dilute the surrounding sauce.” So I started the dish in the same way I usually cook greens—which gave me the chance to work in onions and garlic—before finishing in the oven with cream and cheese. The result was magical—sweet, creamy, tender greens, mashed up with a snap of caramelized cheese. Note: there’s also a vegan variation below.

Enough extra-virgin olive or butter to generously cover the bottom of a large pan
3 medium onions, halved and sliced thin
3 bunches of hearty greens such as kale or collards (I used two kale, one collards)
4 cloves of garlic, smashed, peeled, and minced
Sea salt
1 pint heavy cream
4 ounces grated cheese: a combination of a melty one like Gruyère and a hard one like Parmigiano-Reggiano
Plenty of freshly ground black pepper

Place a large heavy-bottom pot over low-medium heat, add the onions, and let them sauté, stirring occasionally, until they are very soft.

Meanwhile, prep the greens. Remove the stems that run down the center by holding the leaf in one left hand and slicing down each side of the stem with a knife. By the time you’re done, you’ll have two piles: one of stems and one of leaves. I apply a whole-beast ethos to vegetables, and consider greens stems to be highly flavorful. So bunch the stems in a pile and slice them finely, crosswise. Set aside. Now chop the greens and set them aside, too. The point of separating them is to give the stems a head start cooking, as they take a little longer.

Now the onions should be soft. Add the chopped garlic and stir for a minute or so, until it has released its fragrance. Add the chopped stems and a pinch of salt, stir to mix them with the onions and garlic, and cover the pot. Let them cook for about five minutes, stirring occasionally. Now add the greens and another pinch of salt, using tongs to carefully mix in with the sautéed veggies in the pan. Add about a half cup of water (or stock) to the pan, and turn heat to high until the water begins to boil. When it does, turn heat down a little bit, and let the greens simmer, covered, stirring occasionally until they’re nearly tender but still a little al dente. At that point, remove the lid and let them cook, stirring occasionally, until most of the liquid in the pan has evaporated.

Turn off the heat, taste, and add a little salt if necessary. Arrange the cooked greens in a casserole dish large enough to comfortably fit them all. Pour the cream over. Sprinkle the cheese all over the top. Give it a vigorous lashing of black pepper. Bake until the top is well-browned (30-45  minutes). Serve hot. This dish can be made a day or two in advance and reheated in a 350 F oven just before serving. Better yet, cook the greens until they’re tender and then store them in the fridge until the big day, when you bake them off with cream, cheese, etc.

Vegan variation: Replace the cream with coconut milk and replace the cheese with bread crumbs (or slivered almonds) .