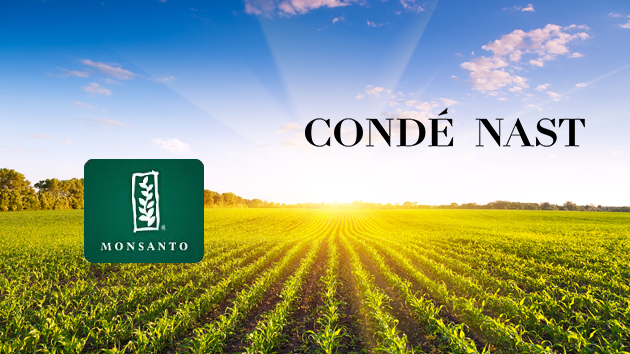 Last week, Gawker uncovered a hapless tie-up between genetically modified seed/pesticide giant Monsanto and Condé Nast Media—publisher of The New Yorker, Bon Appetit, GQ, Self, Details, and other magazines—to produce “an exciting video series” on the “topics of food, food chains and sustainability.”

Marion Nestle was offered $5,000 to participate for a single afternoon.

Since then, I’ve learned that Condé Nast’s Strategic Partnerships division dangled cash before several high-profile food politics writers, in an unsuccessful attempt to convince them to participate.

Marion Nestle, author of the classic book Food Politics and a professor at New York University, told me she was offered $5,000 to participate for a single afternoon. Nestle almost accepted, because at first she didn’t know Monsanto was involved—the initial email she received only referred to the company in attachments that she didn’t open, she said.

“It wasn’t until we were at the end of the discussion about how much time I would allow (they wanted a full day) that they mentioned the honorarium,” she wrote in an email. “I was so shocked at the amount that I had sense enough to ask who was paying for it. Monsanto. End of discussion.”

James McWillams, author of Just Food: Where Locavores Get It Wrong and How We Can Truly Eat Responsibly and a pundit on food issues whose work appears in The Atlantic and other publications, got offered even more, in a conversation with a Conde Nast rep on Aug. 6. “They were not evasive or misleading” about Monsanto’s involvement, he told me, “just not immediately forthcoming…within a question or two it was clear that this was a PR project.”

He wouldn’t tell me on the record how much they dangled, but described it as “more money than I’ve ever been paid to talk” and “considerably north” of Nestle’s offer. He declined.

Apparently, the infamous gender gap in pay lives on, even in the market for corporate flackery. I would have thought that snagging Nestle, a longtime industry critic, would be worth much more than bagging McWilliams, who has written favorably about GMOs. Nestle, who is quoted frequently in major media articles on food topics, also arguably has a considerably higher public profile than does McWilliams.

Then there’s Anna Lappé, author of the book Diet for a Hot Planet and prominent critic of the agrichemical industry. She forwarded me an August 4 email a representative of her Small Planet Foundation received from someone identified as “Senior Director, Strategic Alliances, the Condé Nast Media Group.” The email, printed below, invited Lappé to participate in an “exciting video series being promoted on our brand websites (i.e: Self, Epicurious, Bon Appetit, GQ & Details) and living on a custom YouTube channel,” centered on “food, food chains and sustainability.” It didn’t mention Monsanto, but added that “[c]ompensation will be provided, along with travel two/from the shoot location.” It contained no mention of Monsanto, or specifics on the compensation offer.

Coincidentally, Lappé was already wise to the Monsanto/Condé Nast tie-up. Back in June, she had been forwarded an email about a forthcoming web-based TV show sponsored by Monsanto and produced by Condé Nast, in search of experts to appear as talking heads. Lappé wrote critically about the project in an Al Jazeera America column published August 1, just days before the Condé Nast rep approached her. “I guess they didn’t read the column,” Lappé says.

She replied to the Condé Nast proposition on August 7, complaining that “it was misleading to approach me about participating without divulging the series is being funded by Monsanto.” She never heard back.

That same day, Gawker came out with its post, which contained a leaked email from another Condé Nast employee to unnamed charity group, which contains similar language to the one Lappé received. “We are contacting you to see if there might be a person at [charity group] who could speak to one or two of the episode subject,” the email states. (The email also names documentary film maker Lori Silverbush as someone Condé Nast hoped would be part of the panel. Silverbush’s husband, the famed New York City chef Tom Colicchio, later tweeted, “Lori declined the Monsanto ‘opportunity’ when it was first offered, for reasons you can imagine.”)

The series’ host, the email continued, would be Mo Rocca, a famed comedian and correspondent for CBS Sunday Morning. Lappé, McWilliams, and Nestle were also informed that Rocca would appear as the show’s host. “When I looked up Mo Rocca, he sounded like fun,” Nestle told me.

Soon after the Gawker item appeared, Rocca wrote a note to the publication denying his involvement. “Yes, I was pitched that project but before I gave my answer a letter went out suggesting I was signed on,” he wrote. “That’s not the case. I’m not involved with it.”

I’ve reached out to Condé Nast for comment, and will update this post if the company gets back.

UPDATE: Michael Pollan, author of The Omnivore’s Dilemma and the most high-profile US food-politics writer, was also invited to participate in the project, he informed me Friday. In a July 22 email to Pollan’s lecture agent, a Condé Nast rep talked up an “exciting video series being promoted on our brand websites,” centered on “food, food chains and sustainability,” but didn’t mention Mo Rocca or compensation. Nor did the email mention Monsanto—as with the case of Nestle, the company’s name only appeared in an attachment. Pollan’s agent “declined before money was mentioned,” he said.

Here’s the email Lappé‘s associate got from Condé Nast: 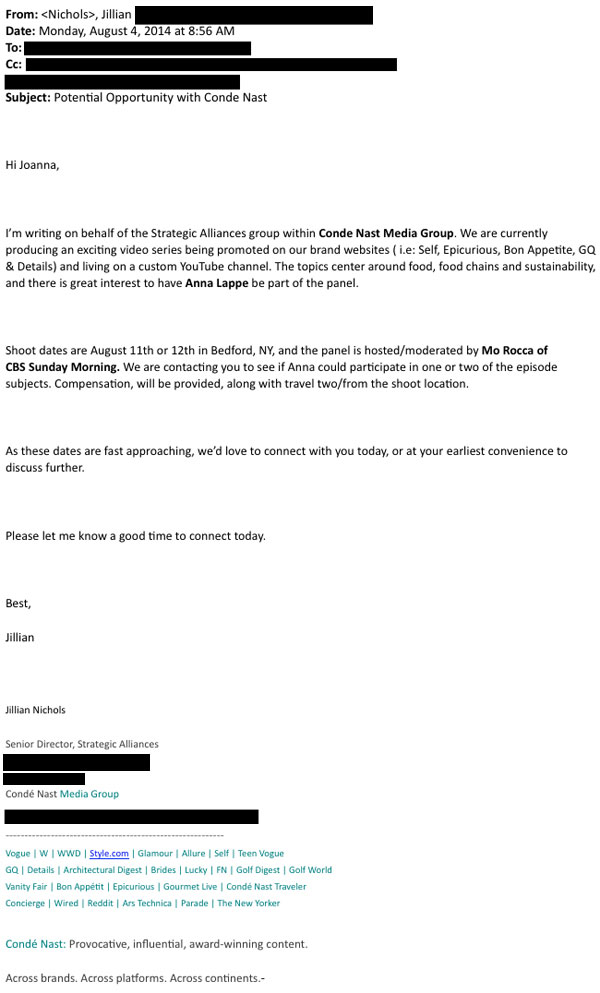 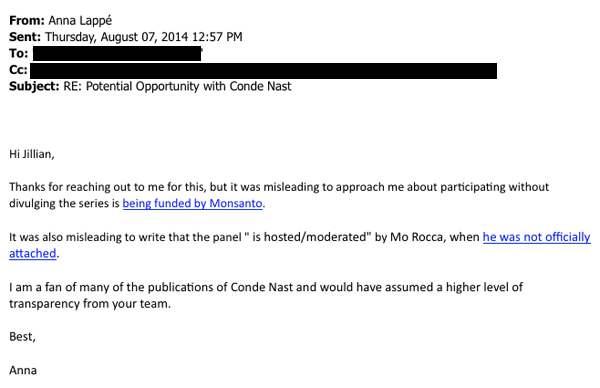