Can you guess what these images mean? See below. The Noun Project and the Grace Communications Foundation

On a frigid Sunday morning in Manhattan this past March, several dozen people, many of them design students, gathered at the School of Visual Art’s building in Chelsea. Their task: to perform a bit of pro-bono marketing for non-corporate food producers—the kind of small and mid-sized farms that grow produce without poisonous chemicals and tend their animals on pasture, not in fetid, polluting feedlots.

The meeting, organized by an innovative Los Angeles-based design firm called the Noun Project (whose founders my colleague Tasneem Raja interviewed here) and an accomplished New York-based sustainable-food advocacy group called the Grace Communications Foundation (the force behind the Meatrix video and Sustainable Table), was modeled on the techie concept of a “hackathon”—a bunch of people getting together to solve some problem. But whereas hackathons typically result in computer code, this “iconathon” would produce images, known as icons, that can wordlessly express concepts like “grass fed” and “heritage breed,” free for anyone’s use under a creative-commons license.

I was invited to help set the table, so to speak, with some remarks. I noted that the food system that has sustained the US for decades—and which is vigorously spreading to other parts of the globe—is failing. Diet-related diseases are mounting and workers are rebelling against the industry’s poverty wages. Meanwhile, I pointed out, the two most important US crop-growing regions, the Midwestern corn belt and California’s Central Valley, are both undergoing slow-motion and devastating ecological crises, involving soil and water, respectively. 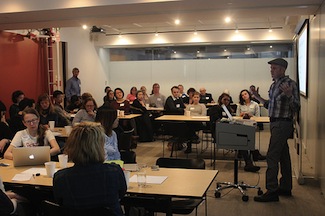 After I harangued the crowd, I figured my work was done. Turns out, it had only just begin. The Noun Project

Yet despite these catastrophes, Big Food remains ubiquitous and highly profitable. One reason why, I suggested, is that like any smart industry, the food giants invest a portion of their annual profits bombarding the public with marketing. In 2012, fast food chains spent $4.6 billion advertising their goods, led by a cool $971 million from McDonald’s. As for the processed-food companies, Kraft alone spends about $683 million hawking such delicacies as boxed mac ‘n cheese in the US; and Coca-Cola drops nearly a half billion dollars pushing its sugary drinks.

Those elaborate efforts paint a big smiley face on a grim landscape; and it is your job, today, I informed the assembled designers, to strike a counter blow on behalf of food producers who refuse to play along. Be their shadow marketing department, I exhorted them, their down-low Don Drapers, give them powerful images they can use to quickly tell their stories in a marketplace dominated by burger-peddling clowns.

I was quickly assigned to a group, whisked to a table, and confronted with markers, blank sheets of paper, and a list of topics to illustrate.

And with that, I figured, my work was done. After all, I can barely sketch my own name legibly, and the closest I’d ever come to participating in a hackathon was to watch The Social Network. But rather then repair to one of Manhattan’s excellent new-wave coffee bars, as was my secret plan, I was quickly assigned to a group, whisked to a table, and confronted with markers, blank sheets of paper, and a list of topics to illustrate.  It turned out that each of this Iconathon’s ten or so groups consisted of at least one designer along with a concerned citizen and a subject expert—a role played in my group by me. Each group was to go down the topic list, come up with ideas for each, and present them at the end.

Before I knew it, I was immersed in discussions about how chickens and pigs can’t be “grass fed,” because (unlike cows) they can’t thrive on grass alone; and how “aquaponics” means growing plants and fish in a closed nutrient loop. I even surprised myself by throwing out image ideas—and was delighted to see a design wizard in my group sketch them out quickly with a few strokes of a pen. I savored the give and take—the messy, fun, thesis-antithesis-synthesis process of brainstorming vague ideas and then moving them into concrete existence through consensus. As a writer, I work alone; the Iconathon reminded me how energizing it is to collaborate with people of diverse skill sets and perspectives—a lesson I last learned while helping run Maverick Farms. Here’s what it looked like:

In the end, after much discussion and a tally of votes involving entries from each group, we settled on our favorite images. The Noun Project’s ace designers, working with volunteer designers who attended the meeting, cleaned them up and have now released them. Our efforts didn’t solve the nation’s food-related problems or come close to balancing out Big Food’s marketing heft. But it’s a start. Here they are, and you can download them here: 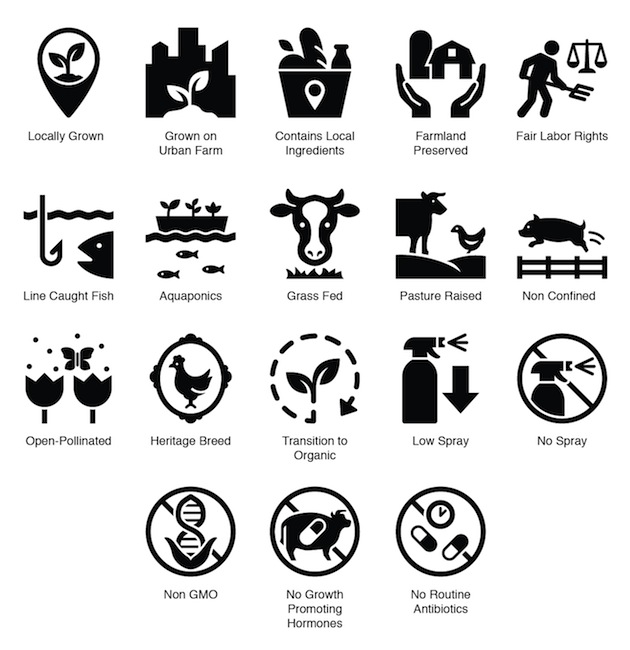