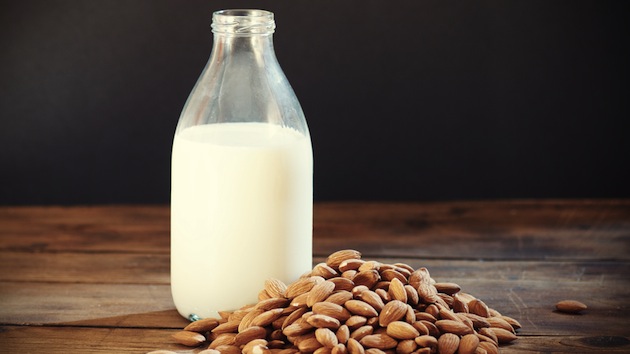 Almonds are a precious foodstuff: a crunchy jolt of complete protein, healthful fats, vitamins and minerals, and deliciousness. Given their rather intense ecological footprint—see here—we should probably consider them a delicacy, a special treat. That’s why I think it’s deeply weird to pulverize away their crunch, drown them in water, and send them out to the world in a gazillion little cartons. What’s the point of almond milk, exactly?

Evidently, I’m out of step with the times on this one. “Plant-based milk” behemoth White Wave reports that its first-quarter sales of almond milk were up 50 percent from the same period in 2013. In an earnings call with investors in May, reported by FoodNavigator, CEO Greg Engles revealed that almond milk now makes up about two-thirds of the plant-based milk market in the United States, easily trumping soy milk (30 percent) and rice and coconut milks (most of the rest).

A jug of almond milk containing roughly 39 cents worth of almonds, plus filtered water and additives, retails for $3.99.

Dairy is still king, of course, comprising 90 percent of the “milk” market. But as our consumption of it dwindles—down from 0.9 cups per person per day in 1970 to about 0.6 in 2010, according to the US Department of Agriculture—plant-based alternatives are gaining ground. Bloomberg Businessweek reports that sales of alternative milks hit $1.4 billion in 2013 and are expected to hit $1.7 billion by 2016, with almond milk leading that growth.

Now, I get why people are switching away from dairy milk. Industrial-scale dairy production is a pretty nasty business, and large swaths of adults can’t digest lactose, a sugar found in fresh dairy milk. Meanwhile, milk has become knit into our dietary culture, particularly at breakfast, where we cling to a generations-old tradition of drenching cereal in milk. Almond milk and other substitutes offer a way to maintain this practice while rejecting dairy. (Almond milk has been crushing once-ubiquitous soy milk, perhaps partly because of hotly contested fears that it creates hormonal imbalances.)

All that aside, almond milk strikes me as an abuse of a great foodstuff. Plain almonds are a nutritional powerhouse. Let’s compare a standard serving (one ounce, about a handful) to the 48-ounce bottle of Califia Farms almond milk that a house guest recently left behind in my fridge. 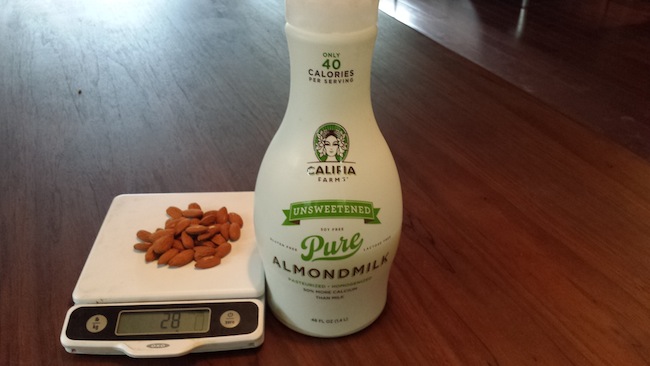 A single ounce (28 grams) of almonds—nutrition info here—contains six grams of protein (about an egg’s worth), along with three grams of fiber (a medium banana) and 12 grams of monounsaturated and polyunsaturated fats (half an avocado). According to its label, an eight-ounce serving of Califia almond milk offers just one gram each of protein and fiber, and five grams of fat. A bottle of Califia delivers six eight-ounce servings, meaning that a handful of almonds contains as much protein as the mighty jug of this hot-selling beverage.

What this tells you is that the almond-milk industry is selling you a jug of filtered water clouded by a handful of ground almonds. Which leads us to the question of price and profit. The almonds in the photo above are organic, and sold in bulk at my local HEB supermarket for $11.99 per pound; this one-ounce serving set me back about 66 cents. I could have bought nonorganic California almonds for $6.49 per pound, about 39 cents per ounce. That container of Califia, which contains roughly the same number of nonorganic almonds, retails for $3.99.

The water-intensive nature of almond milk, of course, is no secret. By law, food manufacturers have to name ingredients in order of their prevalence in the product. For Califia and other almond milk brands, it starts like this: “filtered water, almonds.” Given that it takes 1.1 gallons of water to grow a single almond in California, where 80 percent of the world’s almonds are produced, drenching the finished product in yet more water seems insane.

Califia does make a couple of splashy nutritional claims: “50% more calcium than milk,” the bottle declares, and “50% RDI of Vitamin E.” Almonds are a great source of these vital nutrients, but not that great. Our ounce of whole almonds contains 74 mg of calcium vs. 290 mg for a cup of whole milk, and 7 mg of vitamin E, about 37 percent of the recommended daily intake.

How does Califia’s beverage manage to outdo straight almonds on calcium and vitamin E when it lags so far behind on protein and fat? Again, the answer lies in the ingredients list, which reveals the addition of a “vitamin/mineral blend.” All fine and well, but if you’re interested in added nutrients, why not just pop a vitamin pill?

Califia almond milk contains an added “vitamin/mineral blend.” So why not just pop a vitamin pill?

Moreover, almond milk isn’t just a few nuts packaged with lots of water. It often contains additives. For example, in addition to vitamins, the Califia product, like many of its rivals, contains small amounts of carrageenan, a seaweed derivative commonly used as a stabilizer in beverages. Academic scientists in Chicago have raised concerns that it might cause gastrointestinal inflammation.

I’m not saying your almond milk habit is destroying the planet or ruining your health, or that you should immediately go cold turkey. I just want people to know what they’re paying for when they shell our for it. As for me, when I want something delicious to moisten my granola or add substance to a smoothie, I go for organic kefir, a fermented milk product that’s packed with protein, calcium, and beneficial microbes. Added bonus: According to the label, it’s lactose-free—apparently, the kefir microbes transform the lactose during the fermentation process.

The industry, meanwhile, aims to take its lucrative almond milk model on the road. FoodNavigator reports that White Wave is setting up a joint venture to market its plant-based milks in almond-crazy China.