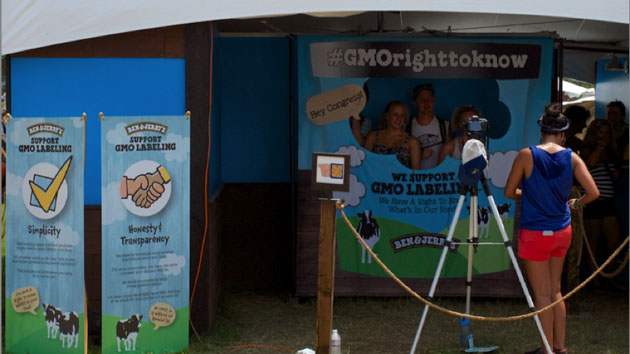 Courtesy of Ben and Jerry's

Ben & Jerry’s pitched a tent at Tennessee music festival Bonnaroo this week, where they dished out free ice cream with a side of lobbying. Their new flavor, ‘Food Fight!’ was inspired by the debate over genetically modified organisms (GMOs) and consumers’ right to know what they’re eating. The ice cream brand has publicly supported the fight to GMO labeling on foods since its decision a year ago to start phasing out genetically modified foods from its products. So why is it still getting boycotted by organic-food activists?

The first victory in the fight for genetically modified food transparency came in Ben & Jerry’s home state of Vermont last month, when the state passed a law requiring food and drink manufacturers to label all genetically modified foods. The Grocers’ Manufacturers Association, a trade group that represents Monsanto, Pepsi-Co, and other big food companies, has sued Vermont as of last week over the new law and hopes to destroy legislation requiring food to be labeled with GMO stickers. In response to the lawsuit filed by the GMA, the Organic Consumers’ Association, a consumer protection and organic agriculture advocacy group, has renewed a 2013 boycott against the GMA and “traitor brands” whose parent companies are members. One of those “traitor brands” is Ben & Jerry’s, whose parent company, Unilever, is part of GMA.

Despite Ben & Jerry’s support for labeling laws and plan to phase out GMOs from its ingredients, the OCA won’t be amending its boycott list. “Any company that pays dues to the GMA is by virtue of its membership in the GMA, supporting the GMA’s anti-labeling campaigns, including the campaign against Vermont,” OCA representative tells Mother Jones. “We are asking brands like Ben & Jerry’s to pressure their parent companies to withdraw from the GMA.”

Christopher Miller, a Ben & Jerry’s representative, says that the ice cream manufacturer doesn’t deserve to be one of OCA’s banned brands, but acknowledges that “there is a role for everyone to play on the issues they care about.” Unilever owns more than 1,000 brands and holds a membership in the GMA, but when it acquired acquired Ben and Jerry’s in 2000 for $326 million, it promised to keep its hands off the brand’s social causes. Miller makes it clear that Ben & Jerry’s sides with Vermont in its ongoing fight against the GMA. “Anyone’s entitled to file suit,” he says. “But we believe that the law is legally defendable and sound. We think we’re going to win.” And Ben & Jerry’s will continue to support labeling bills as they spread through the states. “Our voice is important in this debate,” Miller says. “As a business, we can bring this to the mainstream audience.”