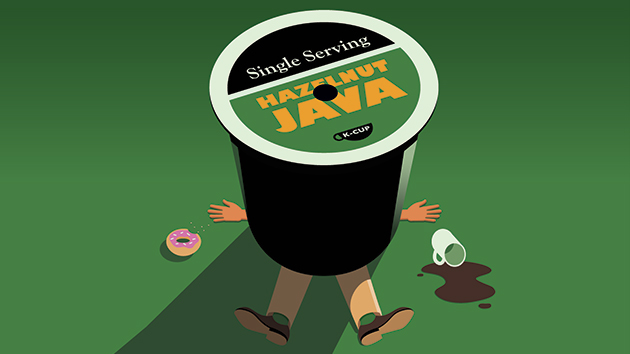 Coffee brewing is in the midst of a revolution, and I’m not talking about the AeroPress. It comes in the form of a small 2-by-2-inch single-serving pod that requires a special machine. Keurig, owned by Vermont-based Green Mountain Coffee, makes the most popular pods, called “K-Cups.” At the press of a button, the Keurig brewer punctures a small hole into the aluminum lid of an individual plastic cup filled with grounds, flushes it with steaming water, and, voilà! Out comes one hot cup of joe.

When Keurig launched its specialized brewing system in 1998, it might have come off as a bit niche. Not anymore. According to a survey by the National Coffee Association, nearly 1 in 5 adults drank single-cup-brewed coffee yesterday, making it the second most popular way to brew after the traditional drip methods—and far more popular than espresso machines.

Keurig would not tell me what types of plastic go into its #7 blend, saying the information was proprietary.

The single-serve method has experienced impressive growth: According to the Seattle Times, while US consumers bought $132 million worth of coffee pods in 2008, they forked over $3.1 billion for them last year, compared to $6 billion for roasted coffee and $2.5 billion in instant coffee. Keurig also has similar brewing systems and pods for tea and iced beverages, and will roll out a system for Campbell’s soup later this year.

What Keurig customers love, proclaims Green Mountain’s 2013 annual report, is the system’s “Quality, Convenience, and Choice”—and let’s be real, it’s convenience that trumps for most busy Americans. Keurig systems take under a minute to brew coffee, and cleaning them is laughably easy: Just chuck the used coffee pod in the trash, then press a button, and a “cleansing brew” shoots hot water through the system to clear it of residue.

But critics warn that the packaging needed for these systems comes with environmental and health-related costs. By making each pod so individualized, and so easy to dispose of, you must also exponentially increase the packaging—packaging that ultimately ends up in landfills. (And that’s to say nothing of the plastic and metal brewing systems, which if broken, aren’t that easy to recycle either.)

Journalist Murray Carpenter estimates in his new book, Caffeinated, that a row of all the K-Cups produced in 2011 would circle the globe more than six times. To update that analogy: In 2013, Green Mountain produced 8.3 billion K-Cups, enough to wrap around the equator 10.5 times. If Green Mountain aims to have “a Keurig System on every counter,” as the company states in its latest annual report, that’s a hell of a lot of little cups.

Green Mountain only makes 5 percent of its current cups out of recyclable plastic. The rest of them are made up of a #7 composite plastic, which is nonrecyclable in most places. And for the small few that are recyclable, the aluminum lid must be separated from the cup, which also must be emptied of its wet grounds, for the materials to make it through the recycling process. Even then, chances are the pod won’t be recycled because it’s too small, says Darby Hoover, senior resource specialist at the Natural Resources Defense Council.

Keurig just released a sustainability report announcing that the company plans to make all coffee pods recyclable by 2020, among other ecofriendly efforts. The company says it’s evaluating the type of plastic used in the cups, exploring potential biodegradable and compostable packaging, and coming up with an easier way for customers to easily prepare them for recycling.

Some competitors already have recyclable or biodegradable versions of this single-serve pod; Nespresso’s lid and pod is made entirely from aluminum. A Canadian brand, Canterbury Coffee, makes a version that it says is 92 percent biodegradable (everything save for the nylon filter can break down). Finding a substitute is an interesting challenge, says Keurig spokeswoman Sandy Yusen, because coffee is perishable, and so the material used must prevent light, oxygen, and moisture from degrading the coffee.

Another reason to look beyond plastic is a concern with what could leach out of the material when heated. Yusen confirmed that the #7 plastic used in K-Cups is BPA-free, safe, and “meets or exceeds applicable FDA standards.” But new evidence suggests that even non-BPA plastics can test positive for estrogenic activity. (Our “Frightening Field Guide to Common Plastics” contains more information about this.)

“No. 7 plastic means ‘other,'” says the NRDC’s Hoover. “You don’t know what it is.” One concern with this plastic mix is the presence of polystyrene, containing the chemical styrene, which Hoover warns is especially worrisome for workers. A possible carcinogen, styrene can wreak havoc on the nervous systems of those handling it, according to the Centers for Disease Control and Prevention. The chemical also shows up in tobacco smoke and home copy machines, and in the Styrofoam used in food containers.

The New York Times determined that single-brew coffee ends up costing more than $50 a pound, even for Folgers.

Keurig would not tell me what types of plastic go into its #7 blend, saying the information was proprietary, nor would it confirm or deny the presence of polystyrene in the mix.

Keurig does make a plastic and mesh reusable coffee filter. But why use a filter that necessitates cleaning—and also requires a fancy-schmancy brewing system—over the traditional method? As Hoover points out, “you’re essentially giving up the convenience of the little teeny tiny cup.”

It’s not just convenience that’s sacrificed. By my calculations, a K-Cup-worth of coffee will run up your tab way more than grounds and a filter (not including the cost of the brewer); a standard pod of Green Mountain coffee costs 68 cents, while one cup of the company’s Vermont Blend brewed the traditional way costs about 44 cents, filter included. The New York Times did a more comprehensive analysis of the actual price of single-brew coffee, and determined that it ends up costing more than $50 a pound, even for standard brands like Folgers, compared to the less than $20 you can expect to pay for a bag of roasted beans. Call me a cheapskate, but I’ll stick to freshly ground coffee that doesn’t require a bulky brewer and billions of plastic pods to be delicious.

Earth designed by Ben King from The Noun Project.

Coffee capsule designed by Stefan Brechbühl from The Noun Project.