In my post yesterday on the defeat of Washington state’s GMO labeling initiative, I speculated that the junk-food industry, which had poured millions into defeating the measure, might support a national label.

My logic was this: Coke, Pepsi, Nestlé, etc, profitably operate in Europe, where GMO ingredients are scarce and labeling is mandatory. Presumably, they could do so in the United States, too. Eventually, I figured, they’d tire of fighting the agrichemical/GMO seed industry’s fight. I pointed to a statement made yesterday by the Big Food trade group the Grocery Manufacturers Association (GMA), to the effect that it would advocate for “national standards for the safety and labeling of products made with GMO ingredients.”

Boy, was I naive. According to GMA documents uncovered by the public-health lawyer and writer Michele Simon, Big Food has no intention of laying down its lobbying or campaign finance swords on the labeling fight. Quite the opposite, in fact. Simon got hold of the documents after the Washington state Attorney General’s Office sued the GMA for having “illegally collected and spent more than $7 million” to fight the labeling initiative “while shielding the identity of its contributors.” To settle the matter, GMA revealed the names of the companies, which turned out to include Pepsi, Coca-Cola, General Mills, and Nestlé USA. Simon told me that she caught wind that the AG’s office had obtained the GMA documents during its investigation, and she in turn obtained from the AG’s office under a Washington open-records statute. But not before the GMA was given the opportunity to redact portions of the documents.

Even so, the docs contain some juicy stuff. Scroll down to the February 18, 2013, “Privileged and Confidential Memorandum” document, which spells out GMA’s labeling agenda. It reports that at a January 19 meeting, GMA’s board of directors “coalesced in support of a multi-pronged approach” to “address the challenges presented by proposals for mandatory labeling of any product containing GMOs.” Here’s what came next: 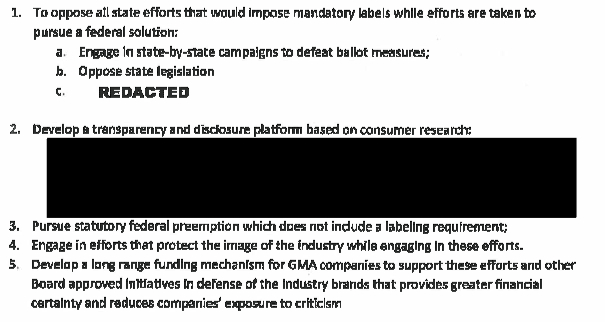 The key bit is number three: “Pursue a statutory federal preemption which does not include a labeling requirement.” Translation: GMA is pushing for a federal law that not only frees the industry from the burden of a national label, but that would also preempt any state labeling requirement. And the group is lining up cash—”a long-range funding mechanism”—for the effort. And it’s planning to “oppose all state legislation” in the meanwhile. The GMA did not return my calls seeking comment on the documents.

Message: Proponents of GMO labeling face the lavishly funded opposition of Big Food—a powerful ally for the agrichemical/GMO industry in the battle against labeling.