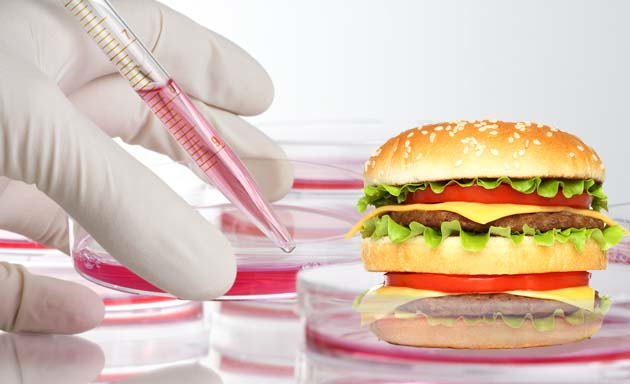 Score one for the techno-optimists. Dutch researchers, funded by Google gazillionaire Sergey Brin, have managed to move lab meat from the test tube to a taste test—a high-proflle one in London. Two intrepid critics, a food scientist and the author of a book on food’s techy future, found it, well, almost meatlike. Here’s the Washington Post:

Rützler [the food scientist] gave the chef an appreciative nod. “It’s close to meat, but it’s not as juicy,” she said. “I was expecting the texture to be more soft. The surface was surprisingly crunchy.” She added: “I would have said if it was disgusting.” Schonwald [the author] said the product tasted like “an animal protein cake.”

Okay, that last phrase doesn’t exactly pique the appetite, but you have to admit, it’s not a bad showing for a product that came not from a cow grazing a lush meadow, but rather from tissue derived from bovine stem cells and grown in “nutrient solution.”

News of the successful tasting excited some food system researchers. Responding to enviro writer Andy Revkin, University of Minnesota scholar Emily Cassidy tweeted, “Why is #culturedbeef important? Shifting away from grain-fed beef could feed over 350 million more people.” To underline her point about the inefficient nature of grain-fed meat, Cassidy presented this excellent video:

In the video, Cassidy makes the key point that it’s generally wasteful to grow grain to feed animals for the purpose of eating the animals—it makes much more sense to directly eat the grain. One reason is that, say, the corn we grow to feed cows isn’t converted only into burgers and steaks. It also creates and supports a large, inedible skeleton, blood, and various organs—most of which becomes waste.

Cassidy’s tweet suggests that lab-grown meat can largely overcome this problem. But just as cows don’t grow out of thin air—they need feed—in vitro meat doesn’t appear magically in those lab vats. It, too, needs to be fed something if it’s going to grow. And that brings up a serious question that’s rarely dealt with in techno-optimist takes on lab meat: What, precisely, is in the “nutrient solution” the stem cells convert into edible flesh? Then there’s the question of the energy required to maintain proper conditions for large-scale lab meat growth.

In a Discover piece last year, University of California-Los Angeles synthetic biologist Christina Agapakis looked at these questions head on and found plenty of reason for skepticism. First, the energy problem:

Cell culture is one of the most expensive and resource-intensive techniques in modern biology. Keeping the cells warm, healthy, well-fed, and free of contamination takes incredible labor and energy, even when scaled to the 10,000-liter vats that biotech companies use. In addition, even in those sophisticated vats, the three-dimensional techniques that would be required to grow actual steaks with a mix of muscle and fat have not been invented yet, though not for lack of trying. (This technology would primarily benefit our ability to make artificial organ replacements.) Add on top of that the fact that these three-dimensional wads of meat would have to be exercised regularly with stretching machinery, essentially elaborate meat gyms, and you can begin to understand the incredible challenge of scaling in vitro meat.

Then there’s the feed question. “The growth medium that provides nutrients, vitamins, and growth hormones to the cells is currently made with a mixture of sugars and amino acids supplemented with fetal bovine serum—literally the blood of unborn cows,” she writes. Fetal bovine serum is a slaughterhouse byproduct (it comes from cows’ blood) used mainly by the pharmaceutical industry. Current cost: $250 per liter—which is one major reason the five-ounce burger tested in London set Sergey Brin back $330,000.

Of course, relying on a slaughterhouse byproduct for feed means that currently, lab-grown beef can’t exist without a vast conventional beef industry. (And obviously, you’ll never market a $330,000 burger anyway.)

The hope, though, is to create cheaper, non-animal-derived feed sources from blue-green algae. But don’t hold your breath, says Agapakis. Blue-green algae, too, is ruinously expensive. Scientists have been trying for decades to cheaply scale up algae production, she writes, but those efforts have failed.

Today, algae is used to produce extremely high-value health-food products, like omega-3 fatty acids and carotenoids, with the average market price for algae products at around $150 per pound of dry cells produced. Compared to the price of corn, which is about $0.09 per pound, or beef at $1.99 per pound, algae has a long way to go before it can play the role of cheap feedstock for in vitro meat production.

I don’t care if tech barons lavish their cash on grand, unlikely techno-fixes. I just hope the effort doesn’t distract from the necessary, difficult task of convincing people to eat much less meat—and when we do eat meat, to relying on meat from animals that feed on stuff we can’t eat directly, like cows that live and munch on well-managed grasslands.