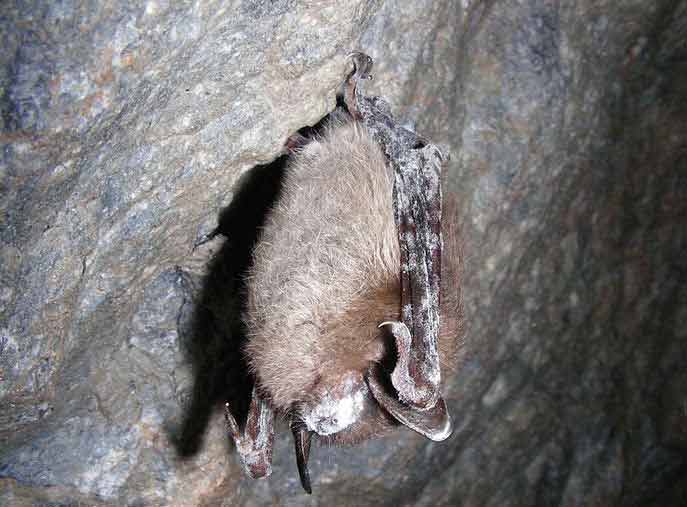 A dead tri-colored bat (Perimyotis subflavus) found at Table Rock State Park in South Carolina has tested positive for Geomyces destructans, the deadly and mysterious fungus that has killed millions of bats since it was first observed in February 2006. The fungus has now been found in 22 US states and five Canadian provinces.

When visible, G. destructans manifests as a fuzzy white patch on bats’ noses, wings and other hairless parts of their body, a condition that yielded the name white-nose syndrome (WNS). Scientists do not yet know if the fungus itself is killing the bats or if it is just a symptom of whatever else is causing the deaths. What we do know is that bat populations that contract the fungus have a 70 to 100 percent mortality rate. There is no known cure or treatment. The fungus thrives only in cold conditions, so WNS appears to threaten only hibernating bats at this time.

Here’s where the disease has been found: 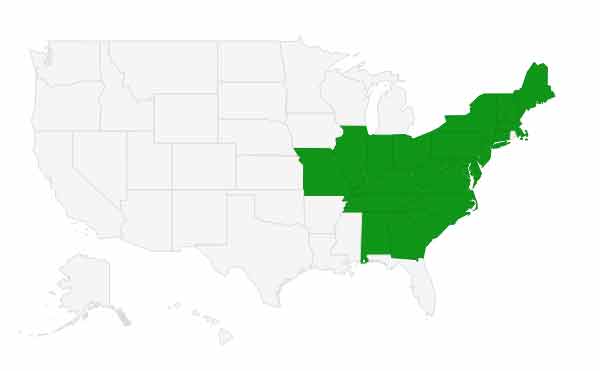 Bats have tested positive for white-nose syndrome in 22 eastern states.

“The news that white-nose syndrome has been confirmed in South Carolina is devastating for these very important mammals,” Mary Bunch, wildlife biologist with the South Carolina Department of Natural Resources (DNR), said in a prepared release. “We will continue to work closely with our partners to understand the spread of this deadly disease and to help minimize its impacts to affected bat species.”

The loss of North American bats could lead to agricultural losses of more than $3.7 billion per year.

According to the South Carolina state agency, the tri-colored bat colony in Table Rock State Park lives in an isolated region where the general public can’t reach them, so there is no threat of human contact. Some scientists fear that people may be transmitting the fungus from cave to cave, although its most obvious transmission path is bat to bat.

Other bat species living in South Carolina that could become exposed to WNS include the big brown bat (Eptesicus fuscus), little brown bat (Myotis lucifugus), Eastern small-footed bat (M. leibii), Northern long-eared bat (Nyctophilus arnhemensis) and Southeastern bat (M. austroriparius). None of these species are currently listed as endangered, but we have already seen bat populations across the northeast plummet due to WNS, so this is a bad sign for all of South Carolina’s bats.

Bats have an important role in regulating insect populations, a function that is vital to successful agriculture. A recent study found that the loss of North American bats could lead to agricultural losses of more than $3.7 billion per year.