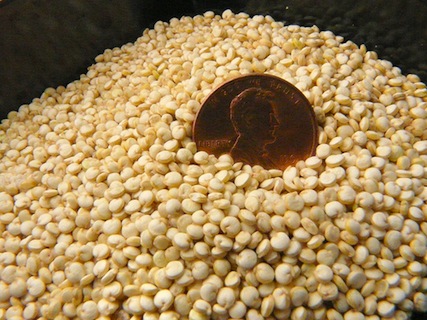 “Can vegans stomach the unpalatable truth about quinoa?,” thunders the headline of a recent Guardian piece. Hard to say, but reality check: It isn’t just vegans who enjoy quinoa. Like many occasional meat eaters I know, I’ve been eating it for years. Quinoa is also big among gluten-intolerant omnivores. So quinoa’s truth—unpalatable or not—isn’t just for its vegan fans to bear.

So what is going on with this long-time staple of the Andes and newly emerged favorite of health-minded US eaters?

The FAO has declared 2013 the International Year of Quinoa and even runs a Facebook fan page for it.

First, the good. Quinoa is the grain-like seed of a plant in the goosefoot family (other members include spinach, chard, and the wonderful edible weed lambs quarters), and its appeal is immense. Twenty years ago, NASA researchers sung its praises as potential astronaut chow, mainly for its superior nutrient density. No less an authority than the UN’s Food and Agriculture Organization hails it as “the only plant food that contains all the essential amino acids, trace elements and vitamins and contains no gluten.” The FAO is almost breathlessly enthusiastic about quinoa—it has declared 2013 the International Year of Quinoa and even runs a Facebook fan page for it.

And quinoa has generally been a success for the people who grow it. Unlike other southern-hemisphere commodities prized in the global north, like coffee and cocoa, quinoa, for the most part, isn’t grown on big plantations owned by a powerful elite. A 2003 Rodale article describes its cultural place in the Andean highlands, an area that encompasses parts of Bolivia, Peru, and Ecuador:

Quinoa (pronounced keen-wá), a seed grain, has been cultivated in the Andean region for over 7,000 years and was considered sacred by the Inca Empire. The crop was relegated to status of animal feed by Spanish colonists, perhaps because of its religious significance and, later, shouldered almost completely out of production by cereals such as barley and wheat and other crops such as potatoes and corn.

Colonial agriculture never really worked very well in the highlands, despite the introduction of agrichemicals. “Pesticide and fertilizer use in Ecuador … increased dramatically over the years,” Rodale reports, “leading to depleted soil and a rise in associated health problems.” But the new technologies failed to bring prosperity—”the farmers’ yields were low, their return was almost nonexistent, and their children were suffering from malnutrition.”

But then, in the 1990s, a variety of projects linking Andean smallholder farmers to do-gooder US importers began to crop up to re-establish traditional quinoa production for export markets. Today, by all accounts, the crop remains a financial success for Andean smallholders. In another recent piece—not the vegan-baiting one—The Guardian reported the price farmers get for their quinoa crop has tripled since 2006. “The crop has become a lifeline for the people of Bolivia’s Oruro and Potosi regions, among the poorest in what is one of South America’s poorest nations,” the newspaper reported.

So what’s the “unpalatable truth” that’s causing all the handwringing? Escalating prices, while boosting farmers’ incomes, are also helping drive down quinoa consumption in the Andes—including among the very farmers who grow it. Quinoa growers have “westernized their diets because they have more profits and more income,” a Bolivian agronomist involved in the quinoa trade told The Guardian. “Ten years ago they had only an Andean diet in front of them. They had no choice. But now they do and they want rice, noodles, candies, Coke, they want everything!”

“As the price has risen quinoa is consumed less and less in Bolivia.”

The economics are simple: “As the price has risen quinoa is consumed less and less in Bolivia. It’s worth more to them [the producers] to sell it or trade it for pasta and rice. As a result, they’re not eating it any more.” In other words, farmers are starting to see quinoa as a product that’s too valuable to eat—they can use the proceeds from selling to buy cheaper, but less nutrient-dense, staples like white rice. There’s also a status issue—quinoa was once a subsistence product, and when people pull out of subsistence mode, there’s a tendency to switch to higher-status foods, even if they’re less healthy.

In urban areas, the situation is varied—The Guardian found quinoa to be ubiquitous in the Bolivia’s largest city, La Paz, “where quinoa-based products from pizza crusts and hamburgers to canapes and breakfast cereals are displayed, Bolivia’s growing middle class appear to be the principal consumers.” But in the Peruvian capital, Lima, quinoa is emerging as a luxury product—it sells at a higher per-pound price than chicken, and for four times as much as rice, the paper reports.

Then there are land and environmental issues. As demand for quinoa surges, farmers are scrambling for new land to cultivate to take advantage of higher prices. The push is squeezing out older forms of sustainable agriculture, and putting serious pressure on soil fertility, as Time reported in this 2012 piece:

Traditionally, quinoa fields covered 10% of this fragile ecosystem, llamas grazed on the rest. Now, llamas are being sold to make room for crops, provoking a soil crisis since the cameloid’s guano is the undisputed best fertilizer for maintaining and restoring quinoa fields. (Other options like sheep poop appear to encourage pests.)

So can people like me, who prefer to avoid foods that are environmentally and socially destructive, eat it with a clear conscience? Not entirely. In a short period of time, quinoa has gone from a local staple to a global commodity. “When you transform a food into a commodity, there’s inevitable breakdown in social relations and high environmental cost,” as Tanya Kerssen, an analyst for Oakland-based Food First told Time last year.

But that doesn’t mean we should stop eating quinoa; it just means we shouldn’t eat quinoa without thinking it through. The Andean region is now governed by progressive, equality-minded politicians like Bolivian president Evo Morales—himself a former quinoa grower now serving as Special Ambassador to the FAO for the International Year of Quinoa. In Bolivia, the government is buying quinoa and “incorporating the plant into a packet of foods supplied to thousands of pregnant and nursing women each month,” The New York Times reports. And in Peru, the government is placing it in public-school breakfasts, The Guardian adds. Such programs can help ensure that non-wealthy Andeans aren’t priced out of the market for this nutrient-dense regional foodstuff.

While the Andes region will always be known as the birthplace of quinoa production, it needn’t be the only place that produces quinoa. The FAO points out that it’s an extraordinarily diverse crop, with 3,000 varieties that thrive in a variety of climates. The organization calls it “crop with high potential to contribute to food security in various Regions worldwide.”

In other words, Andean farmers could focus on growing it for themselves and for the region’s teeming cities, and farmers in other regions could begin growing it for their surrounding markets. Already, quinoa is being grown successfully in the Colorado Rockies, and farmers in the Pacific Northwest are testing it out, too, NPR reports. According to the FAO, it’s also “currently being cultivated in several countries in Europe and Asia with good yields.” By adding supply, these initiatives could push the price of quinoa down to a level that’s still profitable to Andean farmers but affordable to regional consumers. Globally, it’s not hard to imagine a future in which quinoa pays farmers in multiple growing areas a decent return on their labor while remaining affordable for consumers of all income levels.

On the other hand, a global expansion of quinoa production could also cause its price to crash—as happened to coffee in the late 1990s after Vietnam charged into coffee farming, causing a global glut. If a quinoa glut drove prices low enough, Andean farmers’ investments in land and processing infrastructure would be wiped out.

Ugh. Like every other globally traded commodity foodstuff, quinoa is devilishly complicated and prone to tragedy. For now, I’ll keep eating it in moderation, but I won’t take it for granted. Or stop trying to learn more about it—and neither should any of it eaters, vegan or not. Meanwhile, I’m wondering what unpalatable truths might be lurking within chia seeds.