An interesting short video from the International Seafood Sustainability Foundation on what sustainable fishing means to a guy who makes his living fishing—and how his idea has changed over time. FYI when he talks about catch shares he’s referring to a means of fisheries management that dedicates a secure share of fish—or the catch from a fishing area—to individual fishermen, fishing communities, or fishery associations. Here’s how the Environmental Defense Fund describes the process:

With a secure privilege of the total catch and clearly defined access to resources fishermen have the ability to catch a certain amount of fish each year and are responsible for not exceeding that amount. And with this privilege fishermen are afforded great flexibility in planning their business operations. They are no longer told exactly when or how to fish and are able to enjoy the freedom to do what makes sense for them. Often fishermen have the opportunity to buy and sell shares which improves flexibility and increases economic efficiency. Fishermen are also able to coordinate harvests to meet market demands, resulting in higher prices for their catch and overall resulting in improved levels of the fishery’s profitability. 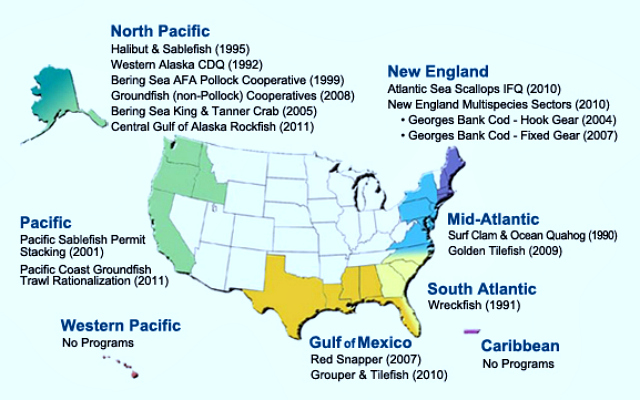 The first catch share program in the US began in 1990, according to NOAA, in the Mid-Atlantic Surf Clam and Ocean Quahog Fishery. Catch shares are currently in use in 15 US fisheries managed by six regional fishery management councils (map above). 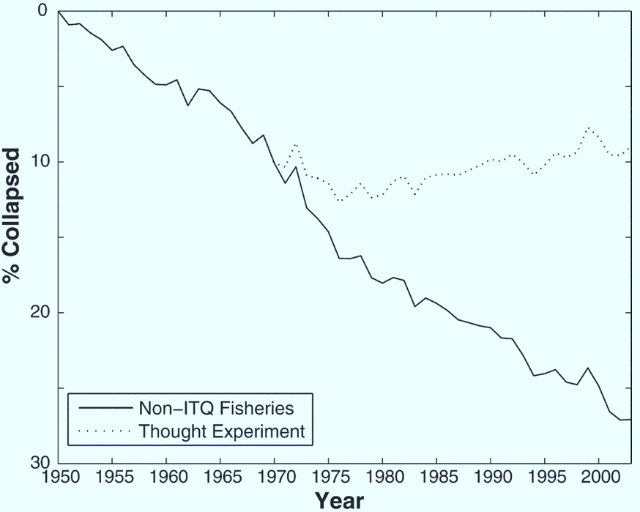 To test whether catch-share fishery reforms achieve these hypothetical benefits we have compiled a global database of fisheries institutions and catch statistics in 11,135 fisheries from 1950 to 2003. Implementation of catch shares halts, and even reverses, the global trend toward widespread collapse… [T]hese findings suggest that as catch shares are increasingly implemented globally, fish stocks, and the profits from harvesting them, have the potential to recover substantially.