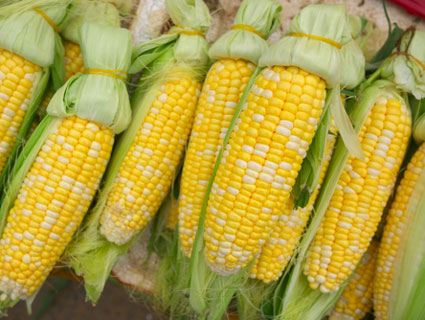 Editor’s note: This is a guest post by geneticist and author Belinda Martineau, who was a principal scientist at Calgene Inc., where she helped commercialize the world’s first genetically engineered whole food, the Flavr Savr tomato.

Genetically engineered (GE) sweet corn is being sold at a Walmart near you. And because that company has said it sees “no scientifically validated safety reasons to implement restrictions on this product,” and because US regulations don’t require it, it isn’t labeled “GE.”

Developed by Monsanto, this GE sweet corn is beautiful by fresh corn standards—not a worm hole in sight—since it contains not one, not two, but three insecticides engineered into each cell of every kernel. Having the corn make its own insecticides means that farmers don’t have to spray those chemicals out in the environment. The end result is that no earworms or European corn borers will have anything to do with this good-looking GE sweet corn. But, you may be wondering: should I?

So here’s the 411 on GE sweet corn at Walmart, based in large part on information available on Monsanto’s website.

First, although Monsanto provides links to “Peer Reviewed Safety Publications” for many of its other GE crop products, it does not do so for its “Seminis Performance Series Sweet Corn.” The peer-review process is a hallmark of scientific validation.

As it turns out, scientists have found reason for concern about the sweet corn. There’s this peer-reviewed report documenting the development of resistance among western corn rootworms to one of the bacterial insecticides present in Monsanto’s GE sweet corn. Another peer-reviewed study finds that weeds such as Palmer amaranth are now resistant to glyphosate, the active ingredient in products like Monsanto’s Roundup herbicide. Since a fourth foreign gene in Monsanto’s GE sweet corn confers glyphosate-resistance to it, I expect we’ll see even more of these “superbugs” and “superweeds” showing up in US farmlands soon, unless this new GE sweet corn is agriculturally managed a lot more carefully than previous GE crops have been.

What Monsanto’s GE sweet corn doesn’t contain is an antibiotic-resistance gene. Many GE crops have such genes because they enable genetic engineers to identify plants that have had foreign genes incorporated into them. Monsanto’s scientists went to considerable trouble to remove the “selectable marker” gene from some of their GE corn products prior to commercializing them, a fact that the American Medical Association is bound to be pleased about.

But as a consequence of the method they used to enable removal of the antibiotic-resistance gene, one of the four remaining foreign genes in Monsanto’s GE sweet corn is different than the gene Monsanto scientists set out to engineer into it. As described in a document posted on Monsanto’s website (PDF): a “molecular rearrangement” occurred “either prior to or during the process of T-DNA transfer to the plant cell” and consequently the foreign gene that ended up in Monsanto’s corn is not the same as the one the company’s scientists designed. Genetic engineering got trumped by biology in Monsanto’s GE sweet corn!

This new biotechnology is not as precise as you may have been led to believe. In fact, there are other aspects of agricultural genetic engineering, such as where the foreign genes get inserted among the recipient organisms’ own genes, that are not under the control of genetic engineers and this lack of control can result in unexpected, unintended changes in a GE crop.

Even so, does some technological imprecision mean the GE sweet corn at Walmart isn’t safe? And even if previous GE crops with the same (or very similar) foreign genes as those in Monsanto’s GE sweet corn have led to superbugs and superweeds, should that influence your buying decisions? Not necessarily on both counts.

But that’s not what California’s Proposition 37 is about. Instead, it asks: Do you deserve some indication that pesticides are intentionally present in the fresh corn you contemplate purchasing and eating? And should you have the right to support, or not support, agricultural methods used to produce food crops that could also be producing new plant pests at the same time? My answer: Yes, definitely.