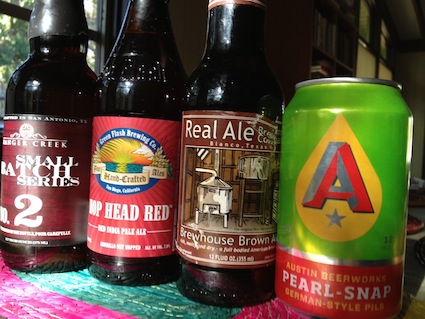 These are a few of my favorite things—and I like to be able to find them on the retail shelf. Tom Philpott

Over at Washington Monthly, Tim Heffernan has an in-depth piece on a topic dear to my heart: the stunning consolidation of the US beer industry. He points out, as I have before, that two vast, globe-spanning companies, SABMliler and Anheuser-Busch InBev, control 80 percent of the US beer market. Heffernan argues that the two companies have essentially hit a wall in getting much bigger here—consolidation is already so extreme that there just isn’t much more consolidating to do without provoking the ire of antitrust authorities. To increase their profits, he shows, the companies are moving toward a vertical-integration strategy: gunning for control of the distribution and wholesaling. That way, they can grow by extracting more revenue and profit out of each dollar Americans spend on beer.

Heffernan takes an odd angle to set up his story. Hyperconsolidation of the kind seen in the beer industry drives down consumer prices, he writes, and low prices for alcohol lead to excessive drunkenness. More on that below—I think Heffernan might be off here. But what caught my eye was his discussion of the way the beer giants are squeezing suppliers and wholesalers to take control of the retail shelf—and potentially squeezing out independent craft brewers, whose wares (which I adore) have taken off in the past 20 years even as the giants consolidated.

Heffernan’s piece mentions a March 2012 interview in the trade publication Beer Business Daily, in which Anheuser-Busch InBev Vice President Dave Almeida “described in perfect detail how retailers can maximize their profits by replacing craft brews with ‘premium’ beer—its term for its mass-produced light lager.” I looked up the interview, and it is amazing. Here’s the relevant passage:

“Craft is a real threat, but it’s also an opportunity,” [Anheuser-Busch InBev Vice President Dave Almeida said]…Dave showed research that indicated that retailers that have too many SKUs actually end up selling less overall beer. He used the example of the health and beauty aids aisle in a supermarket, where consumers spend an average of 90 seconds and only buy something 25% of the time, whereas people spend 31 seconds in the beer aisle and buy something 75% of the time. “Retailers that are winning are not invested in craft to the detriment to the category,” said Dave. Later Dave and his national accounts team walked me through a deck showing that chains that over-SKU with crafts end up selling less beer and making less profit than chains that protect their domestic premium space.

Okay, let’s unpack this. Craft beer has grown dramatically in popularity, and now makes up 6 percent of the total market. And while no individual craft brewer, not even the largest ones like Sierra Nevada, is big enough to pose a threat to Miller and Bud, the industry as a whole, from national brands like Sierra Nevada to your favorite local brew, are taking shelf space from the Big Two. Newsflash: The Big Two want that shelf space back. The retail jargon “SKUs” stands for “stock-keeping unit,” a coding system used by retailers to track inventory. “Too many SKUs” translates to “too many unique products.” What the beer exec is saying is that supermarkets and corner stores might think they make more money by finding space on the shelves for independent craft beers, but they actually sell more beer and book more profits by dropping craft beers and sticking with the giants.

And the giants are now peddling faux craft beers like InBev’s Shock Top or SABMiller’s Pale Moon. So if you’re running the beer cooler of the retail outlet, you’d do better to offer a couple of corporate-made craft knockoffs than a dozen genuine craft brews. “Craft is a real threat,” because it represents a growing thirst for real beer; “but it’s also an opportunity,” because that thirst can be co-opted by knockoffs.

If the InBev exec’s economic analysis is correct and retailers heed his advice, then we could be on the verge of a hard squeeze on what I consider to be one of the most promising aspects of the US culinary scene: the rise of an incredibly robust, varied, and regionally distributed craft-brew industry. They already struggle to get retail space as the once-independent beer wholesale/distribution falls increasingly under the heel of the giants. But if retailers decide they don’t want craft beer, because they make more profit from corporate swill, then it’s hard times for craft brewers.

Heffernan’s discussion of Big Beer’s push to roll up distribution and wholesaling is excellent. I’m less convinced by his frame: that it’s bad because it means cheaper beer and more alcohol abuse. To make his case, Heffernan points across the Atlantic to the UK:

England has a drinking problem. Since 1990, teenage alcohol consumption has doubled. Since World War II, alcohol intake for the population as a whole has doubled, with a third of that increase occurring since just 1995. The United Kingdom has very high rates of binge and heavy drinking, with the average Brit consuming the equivalent of nearly ten liters of pure ethanol per year.

Here in the United States, by contrast:

The United States, although no stranger to alcohol abuse problems, is in comparatively better shape. A third of the country does not drink, and teenage drinking is at a historic low. The rate of alcohol use among seniors in high school has fallen 25 percentage points since 1980. Glassing [“busting a bottle across someone’s face in a bar”] is something that happens in movies, not at the corner bar.

What’s the difference? In the United Kingdom, the alcohol market is horizontally as well as vertically integrated—that is, a few companies not only make most of the beer (horizontal consolidation) but they also control distribution and wholesaling (vertical). “These vertically integrated monopolies are very ‘efficient’ in the economist’s sense,” Heffernan writes, “in that they do a very good job of minimizing the price and thereby maximizing the consumption of alcohol.” Here in the United States, remnants of Depression-era laws maintain a quasi-independent set of wholesalers and distributors as part of a “three-tier” system. Heffernan explains:

The idea is that brewers and distillers, the first tier, have to distribute their product through independent wholesalers, the second tier. And wholesalers, in turn, have to sell only to retailers, the third tier, and not directly to the public. By deliberately hindering economies of scale and protecting middlemen in the booze business, America’s system of regulation was designed to be willfully inefficient, thereby making the cost of producing, distributing, and retailing alcohol higher than it would otherwise be and checking the political power of the industry.

But are US beer prices really higher than those in the UK? I don’t think so, but I’m not sure. It’s hard to find good data on that topic. The best fast-and-dirty source I’ve found is the website PintPrice.com, which invites users across the globe to send in beer prices and then averages them nationally, converting prices into US dollars. According to this admittedly unscientific source, average US price for a pint of lager in a bar is $3.76, vs, $4.76 for the UK. The “popular brands” of lager listed for each nation is different—Coors Light, Budweiser, Bud Light for the US; Carling, Fosters, Stella for the UK—but all of those brands are made by the Big Two: SAB Miller and InBev. Moreover, average disposable incomes are higher in the US than in the UK, meaning we have more available cash to spend on our (evidently cheaper) beer.

So what explains the divergent consumption trends in the US and the UK? I have no idea—resurgent American puritanism?—but Heffernan’s claim seems off. However, the looming corporate threat to craft beer he teases out seems all too real.