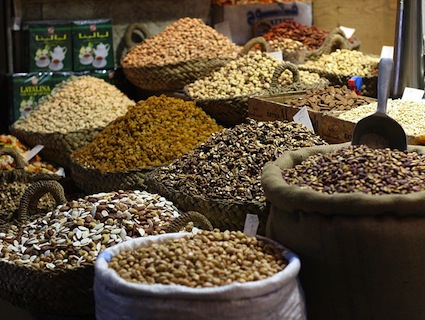 Thirty thousand people have died in Syria’s civil war—and the killing is only intensifying. Obviously, human beings are any war’s most appalling casualties, but there are cultural conflagrations that matter, too—vital spaces laid waste, lost forever. Few alive today have experienced the reputed grandeur of old Warsaw, leveled by Nazi bombs in World War II. How would the celebrated Aztec city of Tenochtitlán have weathered the centuries? We’ll never know, because the Spanish flattened it in the process of conquest, building over it what we now know as Mexico City.

Unhappily, the violence in Syria has spread to the “ancient city” section of Aleppo, a UNESCO World Heritage site and home to the famous Souk Madina, a vast market vending everything from meat to spices to fabric since medieval times. On Saturday, reports Reuters, a clash between government and rebel forces sparked a fire that swept through the old market, burning a substantial portion of it. According to Reuters, it’s the largest covered market in the world—”a network of vaulted stone alleyways and carved wooden facades” whose winding interior hallways “have a combined length of eight miles.”

The extent of the damage remains unclear, but it appears extensive. Reuters reports that local observers say at least 1,500 stalls are ruined, and were, as of Sunday, still burning. UNESCO Director-General Irina Bokova has issued a missive deploring the destruction. “The Aleppo souks have been a thriving part of Syria’s economic and social life since the city’s beginnings. They stand as testimony to Aleppo’s importance as a cultural crossroads since the second millennium B.C.,” she wrote. I have emails into the UNESCO press office seeking an update on the damage.

Though I’ve never been to the Middle East, Souk Madina has long occupied a place in my imagination for the storied richness and diversity of its spices, produce, and meat, the maze of hallways and vaulted ceilings that make up its endless stalls, and the sheer grand chaos of a teeming old market. So I contacted a few US food authorities from whose writings I’ve learned to revere the cooking of the Eastern Mediterranean to get their perspective on the apparent disaster.

Gary Paul Nabhan is a Syrian/Lebanese American, a MacArthur “genius” grantee, and a longtime chronicler of the ways food, agriculture, and culture intersect. His 2008 book Where Our Food Comes From: Retracing Nikolay Vavilov’s Quest to End Famine, contains an excellent section on Eastern Mediterranean foodways.

In an email, Nabhan brought up the glorious cosmopolitanism of the great old markets on the ancient east-west spice trail. “Aleppo’s Souq al-Medinah was one of the last places in the Middle East where the legacies of Moslem and Christian Arabs as well as Sephardic Jews could be palpably felt,” Nabhan wrote. He called it the “primary point-of-departure” for Aleppo pepper, a pungent, coarse-grained ground chili now prized by cooks around the world, including me. (Back in 2010, Nabhan warned that drought, likely driven by climate change, was wreaking havoc on the small-scale Syrian farmers who grow the Halaby pepper, from which Aleppo’s famous ground chili is made.) 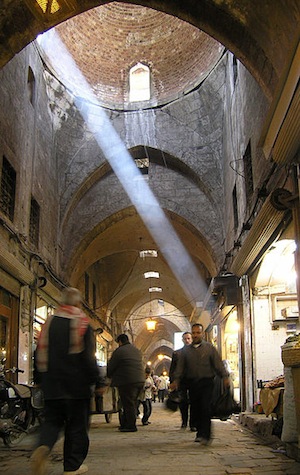 Architectural granduer: Souk Madina in 2004 seier+seier/Wikimedia Commons“Now a legacy of multicultural coexistence or convivencia that persisted for centuries has been obliterated by the Assad regime’s megalomania to stay in control at all costs,” Nabhan wrote in his email. He added: “I fear that one of the world’s great examples of intangible multicultural heritage has been lost forever, at a time when we all need such touchstones.”

Clifford Wright, author of the excellent 1999 book A Mediterranean Feast, which combines history of the region’s cuisine with a large selection of recipes, was equally distressed. From what he’s read, he told me, about 50 percent of the market is destroyed beyond repair. “If that’s true, it’s a real cultural loss, not just for Syrians but for mankind.” He, too, blamed the Assad regime. “Even the Nazis during World War II declared Paris and Rome open cities, meaning they wouldn’t fight for them,” he said. The fact that the regime appears to have attacked the market “shows its base nature”—and also the desperation it feels in the face of the rebellion.

The celebrated cookbook author Paula Wolfert, whose works like The Cooking of the Eastern Mediterranean (1994) helped make Aleppo pepper an object of desire among US foodies, told me she visited Souk Madina in 1989. “But you know what?” she said. “There’s no difference between 1929, 1989, and 1999” at the market. She called the market a “fabulous” place, and recalled being dazzled by the market’s variety of goods and timeless quality. She took a practical view of its recent trauma. “It’s a pity what happened, but it can be rebuilt,” she said. “The real tragedy is the devastation and slaughter of people, who can’t be rebuilt.”