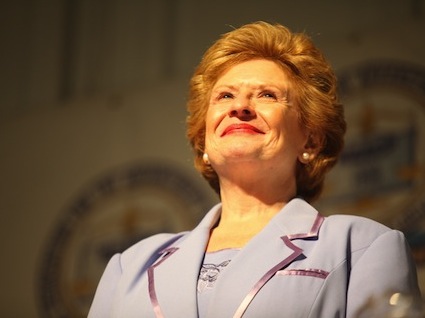 As the 2012 farm bill zipped its way through the Senate—passing Thursday by a vote of 64-35— I kept thinking of something that veteran farm policy watcher Fred Hoefner of the National Sustainable Agriculture Coalition told me back in April.

He said that the Senate version represents the bill’s “high-water mark” in terms of progressive policy—that whatever the Senate comes up will be pushed in more Big Ag-friendly, regressive directions during reconciliation with the House.

Well, as expected, the Senate version of the farm bill preserves the broad incentives that have been in place for US agriculture for decades: Grow as much corn, soy, and a few other commodities as possible. It achieves it through insurance schemes described in my April post.

And yet, as dismal as the Senate’s farm bill is, it could have been much worse. A flurry of amendments—the National Sustainable Agriculture Coalition has a good rundown here are here—improved the bill at the margins. For example, the Senate ag leadership had tried to push the bill through without “conservation compliance” provisions to subsidized crop insurance. That would have allowed farmers to plow up fallow, environmentally fragile land for crops, and cash in on taxpayer-subsidized insurance policies if the crops failed. Importantly, in an amendment that squeaked by Wednesday by a vote of 52-47, farmers utilizing subsidized crop insurance will have to agree to basic conservation measures.

Another successful amendment preserved funding for many of the progressive farm programs bundled by the Obama administration under the Know Your Farmer, Know Your Food banner, including Beginning Farmer and Rancher Development Program, the Value-Added Producer Grants program (which helps farmers capture more of the retail value of farm goods by, say, turning milk into cheese), and the Rural Microentrepreneur Assistance Program. And an amendment that would have killed the National Organic Certification Cost-Share Program, which helps farmers transition land to organic management, failed, the National Sustainable Agriculture Coalition reports.

The Senate agriculture committee spent all of three hours pondering the trillion-dollar bill—about $90 million a second.

But these successes should not obscure the underlying awful nature of US farm policy and the political process that creates it. As Food & Water Watch’s Wenonah Hauter pointed out in an emailed statement, the entire process of cobbling together the once-every-five-years omnibus legislation has taken place with minimal public input or oversight. The broad outlines of the package voted on by the Senate Thursday were drawn behind closed doors by the shrouded-in-secrecy “supercommittee” formed last year—a ridiculous process I described in a November post. According to Hauter, the Senate agriculture committee spent all of three hours pondering this trillion-dollar bill—”about $90 million a second.”

Hauter also pointed out that the Senate farm bill version failed to take on the massive power wielded by the meat industry over farmers. The previous farm bill at least contained a “competition title” that charged the USDA with reining in the meat industry’s ability to control prices paid to farmers—an effort that was eventually gutted by the Obama USDA. The Senate version of the current bill contains no competition title, and two proposed amendments that would have forced the issue didn’t even make it to a floor vote, Hauter reports.

Moreover, the bill would trim the hunger program that lies at the heart of the farm bill—SNAP, formerly known as food stamps—by $4.5 billion over the next five years. That’s a small cut compared to SNAP’s current $80 billion annual budget, and it could have been worse, as some GOP senators sought much deeper cuts.

Deeply flawed, yet not as bad as it could have been, the Senate farm bill now goes to the House. There, tea party stalwarts bearing sharp knives will hack away at it—targeting anti-hunger programs like SNAP and the Know Your Farmer initiatives, while leaving the handouts to Big Ag intact. But, who knows, maybe the House version, too, will emerge not quite as bad as expected.