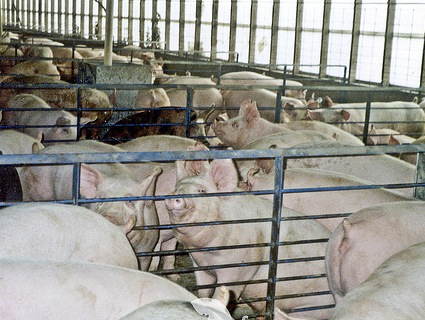 For decades, FDA saw its duty to reckon with antibiotic abuse on factory livestock farms like many of us see the dentist: as something to be put off as long as possible. Meanwhile, evidence piled up like manure in a chicken factory that giving animals small, daily antibiotic doses gives rise to antibiotic-resistant pathogens that threaten people.

Finally, earlier this year, the agency proposed new rules that would restrict the meat industry’s antibiotic habit. Trouble is, the proposed rules are voluntary and contain a gaping loophole.

But the public may be running out of patience with the FDA’s toothless-watchdog approach to regulating the meat industry. A just-released nationwide poll conducted for Consumers Union found that the majority of people are none-too-thrilled with tjhe role of antibiotics in ag. Results:

As someone who writes about this topic a bit, I’m quite heartened by these findings. People are finally starting to care about what the meat industry gets up to in order to profitably churn out cheap burgers, pork chops, and drumsticks.

Consumers also expressed enthusiasm for alternatives to meat raised in a deluge of antibiotics. From the complete report:

More than 60% of respondents stated that they would be willing to pay at least five cents a pound more for meat raised without  antibiotics. Over a third (37%) would pay a  dollar or more extra per pound.

Yet 24 percent of respondents said their supermarkets offered no access to antibiotic-free meat products—and of those, 82 percent said they would buy them if they could.

Consumer Union also sent “secret shoppers” into at least five stores operated by each of the nation’s 13 largest grocery chains, to get a snapshot of what consumers have access to. They found the widest variety of antibiotic-free meat products at five chains:  Whole Foods (where all meat offerings come from animals raised without antibiotics), Giant, Hannaford, Shaw’s, and Stop & Shop.

At other chains, however, Consumer Union’s shoppers found no antibiotic-free products. They are as follows.

What all of this tells me is that consumers want alternatives to the pharmaceutical-meat complex and the market isn’t doing enough to deliver them. It’s time for the FDA to step up and act.