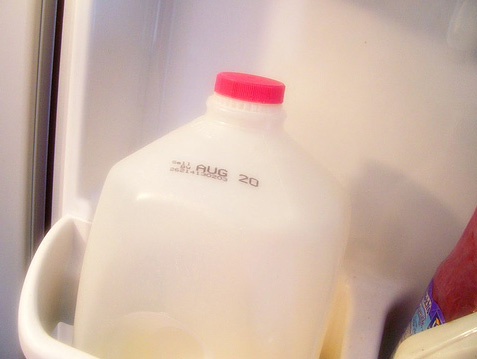 Researchers at the University of Edinburgh have found that maybe we should be crying over spilled milk. The amount of milk that Brits waste every year—360,000 tons—is responsible for 100,000 tons of carbon dioxide emissions. That’s roughly equivalent to the output of 20,000 cars, and that’s just in the United Kingdom.

The research, published in the journal Nature Climate Change, looked more broadly at food waste in the UK, finding that people could reduce their own emissions pretty significantly by changing their shopping and eating habits. From their release:

Researchers also say halving the amount of chicken consumed in the UK and other developed countries to levels eaten in Japan could cut greenhouse gas emissions equivalent to taking 10 million cars off the road.

Figures show that if average chicken consumption in developed countries fell from the current level of 26kg each per year to the Japanese average of about 12kg each by 2020, global emissions from poultry would fall below current levels, despite increased output from the developing world. This would cut the predicted global output of nitrous oxide, a key greenhouse gas, from this source by almost 20 per cent, based on current growth rates.

Food waste is one of my pet issues. And the takeaway, according to the researchers, is pretty simple: Eat fewer animal products; buy only what you can eat; and when you buy food, eat it.