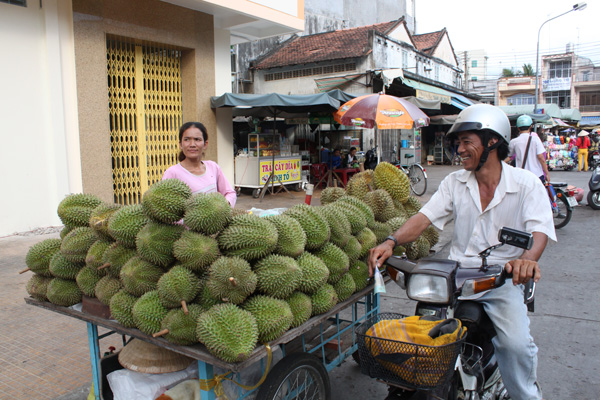 This guy is really excited about his purchase.

Vietnam—especially the province I have spent most of my time reporting from—has loads of delightful fruits. Giant, grapefruit-like pomelos, prickly and brightly colored rambutans, fleshy yellow jackfruit, and delicate mangosteens abound. But the most memorable for me—and probably for many newcomers in the region—is the polarizing durian.

I’d never seen, or smelled, a durian before. My first exposure to the fruit was this sign in my hotel room listing the fees I’d be assessed if I did various things in my room. When I realized the fee for eating durian in your room was twice as much as the fee for letting your kid poop on the floor, I decided that I really had to try it. 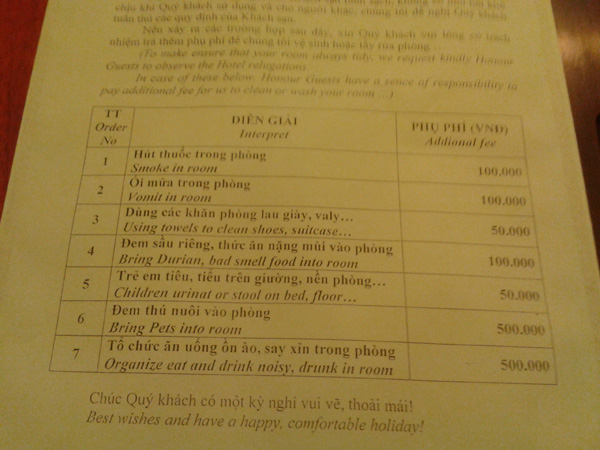 It’s a large fruit with a hard, spiky green husk, which makes you wonder what made anyone decide it looked tasty in the first place. But you usually smell it before you see it—an odor that’s been likened to “completely rotten, mushy onions (by Chef Andrew Zimmerman) and “pig-shit, turpentine and onions, garnished with a gym sock (by author Richard Sterling in The Travelling Curmudgeon, via Wikipedia). Chef, author, and TV travel food guru Anthony Bourdain notes that, after eating it, “Your breath will smell as if you’d been French-kissing your dead grandmother.” Yum!

But as fellow traveler noted, the durian “tastes like heaven, but smells like hell.” Most people—myself included—have a hard time getting past that initial impression. Its odor permeates through the thick skin, smacking you in the face well before you even see the market stands overflowing with the giant orbs. I’ll be blunt: It smells like shit.

If you can get past the smell, there’s still the mushy, custard-like texture to contend with. None of this works in the durian’s favor. The fruit inside is yellowish-green, and shaped kind of like what I imagine an alien fetus looks like. I’ve been told it’s an acquired taste—though one I didn’t happen to acquire over my time in Vietnam. I did, however, grow to like durian-flavored ice cream, a less-pungent version of the treat. But judging by the fruit’s ubiquity in Vietnam, the locals love this “bad smell food.”

I held off on blogging about it, but then I learned that climate change has been blamed for a durian surplus in the Philippines. Yet another consequence of global warming!