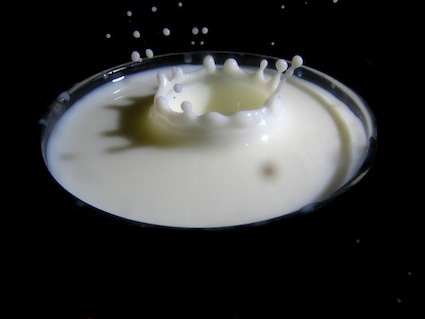 USDA-mandated testing turned up a downed California dairy cow that was infected with bovine spongiform encephalopathy (BSE), also known as mad cow disease, the agency announced Tuesday. According to an exec with the rendering plant where the poor beast ended up, it was chosen for testing completely at random, having shown “no signs” of disease.

The scenario suggests that relatively recently, a BSE-infected cow was producing milk for public consumption. According to the USDA, there’s nothing to worry about. The agency’s chief veterinary officer, John Clifford, released a statement Tuesday declaring that the the the cow in question had “atypical BSE, a very rare form of the disease not generally associated with an animal consuming infected feed.” He added that “milk does not transmit BSE.”

But acting on a tip from Consumers Union chief scientist Michael Hansen, I have found research that calls that claim into question. The research involves a brain-wasting disease affecting sheep called scrapie, which, like BSE, is what’s known as a transmissible spongiform encephalopathy. Unlike BSE, scrapie is not thought to infect humans; but like BSE, scrapie is thought to be caused by something called prions, which are rather terrifying. Here’s how the Centers for Disease Control describes them:

Unlike, say, bacterial pathogens, prions are extermely resistant to heat.

So, I’ve found two different studies that suggest that scrapie does in fact transmit from sheep to sheep through milk.

The first, by French, Norwegian, and British researchers and published in the peer-reviewed US journal PLoS Pathogens in 2008, found prions in sheep milk. The authors state:

This finding indicates that milk from small ruminants could contribute to the transmission of prion disease between animals. It also raises some concern with regard to the risk to humans associated with milk products from ovine and other dairy species. [Emphasis added.]

The second, by UK researchers and published in BMC Veterinary Research in 2008, also demonstrated “transmission of scrapie from ewe to lamb via milk (or colostrum).”

Now, this research doesn’t show that BSE can move from cow milk to humans. But it represents evidence that prions can move from animal to animal through milk. In a phone interview, Hansen stressed that previous studies have suggested that “classic” BSE—not the “atypical” one found in the California cow—does not transmit through milk. But he added that he’s not aware of any studies regarding “atypical” BSE and milk. Moreover, he added that the studies regarding scrapie and milk are using “more sensitive” testing procedures than the previous ones involving classic BSE and cow’s milk.

He called the possibility that the BSE found in that California dairy cow can pass through milk an “open question.”

Hansen also noted a report in the Washington Post which stated that the BSE found in the cow is of the L-Type. “If that report is accurate, it’s not good news,” he said. He called L-type BSE to be “far more virulent” than classical BSE and pointed me to a 2008 study in Emerging Infectious Diseases that subjected “humanized” mice (genetically engineered to have human proteins) to L-type BSE. The study found that L-type BSE transited to the mice with “no significant transmission barrier,” while “in comparison, transmission of classical BSE agent to the same mice showed a substantial barrier.”