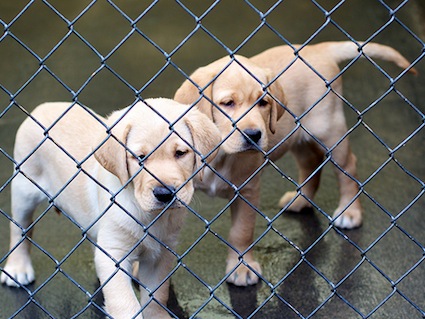 Shock and awwwww: If these make you melt, you may not get Big Ag's support. <a href="http://www.flickr.com/photos/niallkennedy/5232716855/sizes/m/in/photostream/">niallkennedy</a>/Flickr

Rick Santorum has a thing for puppies. Not a creepy fixation, mind you—apparently, he just doesn’t like to see them raised in vast “puppy mills.” Santorum also evidently likes horses, and would prefer not to see them slaughtered. And these stances has led him to make common cause with the Humane Society of the US.

Strange then, that a man who deplores the stuffing of puppies into confined spaces and recoils from the slaughter of innocent horses, has no beef with an industry that stuffs cows, pigs, chickens, and turkeys into tight spaces with the intention of slaughtering them.

I know all of this, because of an exposé on Forbes.com posing the question: “Is Rick Santorum a Closet Animal Rights Activist?”; and a piece in the industrial-ag trade weekly Agri-Pulse ($ub only) called “Santorum raises ‘aggie’ eyebrows over HSUS [Humane Society of the US] ties.”

It turns out that during his stint as a US Senator, Santorum worked with the Humane Society of the United States to try to rein in puppy mills. In his Forbes piece, Frank Miniter reveals this shocking episode:

In one example, in 2001 then Sen. Santorum (R-PA) introduced S. 1478, the Puppy Protection Act of 2001, with Sen. Dick Durbin (D-IL). This act intended to improve conditions for dogs at “puppy mills” by addressing socialization and breeding issues, and by creating a “three strikes and you’re out” system for violators of the Animal Welfare Act. “The bill will require commercial breeders to provide socialization for dogs at their facilities,” Santorum said at the time.

Socialization…. isn’t that just like socialism? And that’s not all: “[I]n 2006 Santorum voted to stop horse slaughtering by defunding mandatory federal inspections of horse-processing facilities.” Whoa! And then there’s this:

Santorum did more than back animal-rights legislation; he even held a press conference in 1995 in which he was pictured alongside Wayne Pacelle, an animal-rights activist who now heads the Humane Society of the United States (HSUS)

And here we get to the real scandal. HSUS, you see, isn’t just about socializing puppy-dogs or protecting horses from having their throats slit. It’s also about exposing cruel, reckless practices on factory farms. And Santorum’s nearly two-decades-old alliance with this “anti-farming” (Miniter’s words) group has Big Ag sharpening its pitchfork and aiming it at at the former Senator from Pennsylvania.

Blake Hurst, president of the Missouri Farm Bureau and author of a scathing critique of Michael Pollan (which I commented on here) put it this way to Miniter:

I can say with a great deal of confidence that Santorum’s relationship with HSUS is a deal killer for much of the agriculture community. As far as I can tell he’d be comfortable with requiring regulations on agriculture—and large dog breeders are a part of this market—that would make it much less efficient to raise livestock.

Santorum, for his part, rejects the charge that he’s hostile to ag interests. According to Miniter, before last month’s Missouri primary, Santorum  acknowledged that he is indeed guilty of having a soft spot for dogs. “I am a pet owner who believes they should be treated humanely, not someone who ties them to the top of a car,” he declared, referring to one of my very favorite anecdotes about Mitt Romney—the time he and his family lashed their dog Seamus to the roof of their car while driving to a vacation.

But puppy-love, Santorum emphasized, should not be mistaken for an appetite to take on Big Ag’s livestock-rearing methods:

As President, I will be equally committed to protecting and supporting all facets of the agriculture industry for the benefit of American jobs and American consumers … … I have always believed that a commitment to the humane treatment of animals must be balanced with strong protections for licensed small animal breeders and large animal agriculture operators who function ethically to do so without onerous and unreasonable government regulations.

While Santorum wrestles with the charge that he’s just too soft on animals to fight for Big Ag, his opponent has more than just mean dog-transportation tales to prove his fealty to agribusiness and its ways. As I reported a few days ago, Romney recently rolled out an ag-advisory committee that features a Big Ag lobbyist, an agrichemical exec, and an industrial-corn shill.

With the GOP nomination process going the way it is, Santorum may soon find himself publicly kicking a puppy—or lashing one to the roof of his campaign bus—to prove his bona fides as an industrial-agriculture champion.