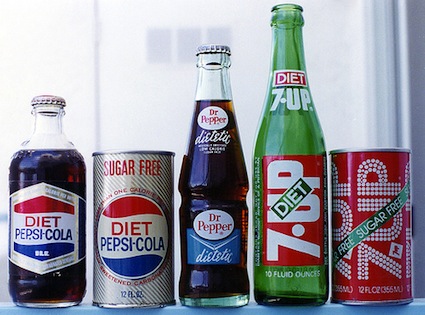 What is this thing called diet soda? Here are the ingredients of one of the best-selling brands, Diet Pepsi:

My favorite line on that list is the “preserves freshness” that follows potassium benzoate. The freshness of what, precisely? The caramel color? Not likely—caramel color for most colas comes from a chemical reaction between sugar, ammonia, and sulfites at high temperatures. Or maybe it’s the phosphoric acid? Or the least plentiful ingredient of all, the unspecified “natural flavor”? In plain English, diet soda is artificially blackened water tarted up with synthetic chemicals. That anyone ponies up cash for such a thing surely counts as one of the food industry’s greatest marketing triumphs.

But it’s relatively benign, because it doesn’t fill people up with superfluous and potentially toxic calories from isolated sugars. Right? Well, maybe not.

Back in 1990, the National Institutes of Health began funding a long-term study of stroke and cardiovascular risk factors among of urban adults. Known as the Northern Manhattan Study and housed at Columbia University, the project enrolled thousands of people from the community and subjected them to medical testing while recording their food consumption habits.

Among its results, a surprising one has emerged (recently published paper available here): People who drink at least one diet soda a day are 43 percent more likely to experience a “vascular event”—i.e., strokes and heart attacks—than people who drink none.

Now, it’s important to understand that studies like this one establish correlation, not causation. It’s possible that the heart trouble experienced by diet soda drinkers comes from some other behavior they share that has nothing to do with diet soda.

The Manhattan results comes on the heels of other highly suggestive research showing an association between diet-soda consumption and type 2 (adult onset) diabetes and metabolic syndrome, a condition characterized by abdominal obesity, high blood pressure, and other factors.

I would be remiss if I did not add that the main sweetener for diet soda is aspartame, a substance that back in the early 1980s took a controversial and colorful path through FDA regulatory approval that I described in this Grist post last year. In a 2005 study of rats published in Environmental Health Perspectives, researchers at the European Ramazzini Foundation found aspartame to have carcinogenic effects at low levels—a suspicion that has haunted the sweetener since its tortured approval process in the ’80s. The FDA officially dismissed the Ramazzini results in 2007, claiming that they’re based on poor science.

Even so, the latest research from Manhattan suggests people looking for healthy alternatives to sugary sodas might do well to avoid the “diet” option.