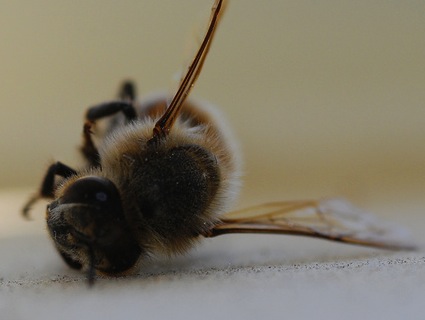 It’s springtime, and farmers throughout the Midwest and South are preparing to plant corn—and lots of it. The USDA projects this year’s corn crop will cover 94 million acres, the most in 68 years. (By comparison, the state of California occupies a land mass of about 101 million acres.) Nearly all of that immense stand of corn will be planted with seeds treated with neonicotinoid pesticides produced by the German chemical giant Bayer.

And that may be very bad news for honey bees, which remain in a dire state of health, riddled by large annual die-offs that have become known as “colony collapse disorder” (CCD).

In the past months, three separate studies—two of them just out in the prestigious journal Science—have added to a substantial body of literature linking widespread use of neonicotinoids to CCD. The latest research will renew pressure on the EPA to reconsider its registration of Bayer’s products. The EPA green-lighted Bayer’s products based largely on a study funded by the chemical giant itself—which was later discredited by the EPA’s own scientists, as this leaked memo shows.

When seeds are treated with neonics, the pesticides get absorbed by the plant’s vascular system and then “expressed” in the pollen and nectar, where they attack the nervous systems of insects. Bayer targeted its treatments at the most prolific US crop—corn—and since the late 1990s, corn farmers have been blanketing millions of acres of farmland with neonic-treated seeds.

And it’s not just corn. In addition to the vast corn crop mentioned above, Bayer’s neonics have worked their way into substantial portions of the soy, wheat, cotton, sorghum, and peanut seed markets. In 2010, according to research by the Pesticide Action Network of North America, at least 142 million total acres were planted in neonic-treated seeds—a trend that will continue if not increase in  the 2012 growing season. That represents a landmass equal to the footprints of California and Washington State.

But even that’s not all. As I showed in this January post, Bayer’s neonics are also common in home-garden and landscaping products.

The ubiquitous pesticides appear to affect bees in two ways: in big lethal doses that occur at the time of seed planting, when neonic-infused dust wafts around in growing areas; and in tiny doses that happen when bees bring neonic-infused pollen into hives, which don’t kill them immediately but appears to damage their immune systems and homing abilities.

Here’s a quick snapshot of the new research.

• In a paper forthcoming in the peer-reviewed and highly respected journal Science—released Thursday on (subscription-required) ScienceExpress—researchers found that exposure to small, sublethal doses of a neonic called thiamethoxam significantly affects bees’ ability to find their way back to their hives—”at levels that could put a colony at risk of collapse.” The research team also found that previous impact studies “are likely to severely underestimate sublethal pesticide effects when they are conducted on honey bee colonies placed in the immediate proximity of treated crops.”

• The other forthcoming Science paper—also behind a paywall on ScienceExpress—looked at neonics’ effect on wild bumblebees, which are another critical pollinator that have gone into severe decline in recent years. In this study, researchers subjected bumblebee colonies to “field-realistic levels of the neonicotinoid imidacloprid” and then “allowed them to develop naturally under field conditions.” The result: “Treated colonies had a significantly reduced growth rate and suffered an 85% reduction in production of new queens.” Their conclusion: “Given the scale of use of neonicotinoids, we suggest that they may be having a considerable negative impact on wild bumble bee populations across the developed world.”

The latest burst of research follows on the heels of a study released in January by Purdue researchers (I summarized their results here). They determined that bees are exposed to “extremely high” levels of Bayer’s clothianidin in the fumes that rise up when farmers plant corn seed in the spring. They found the pesticide in dead bees “collected near hive entrances during the spring sampling period,” as well as in “pollen collected by bees and stored in the hive.”

These studies, combined with what we know of the the tortured, Bayer-influenced nature of neonics’ march through the regulatory process, paint a damning picture. As Pesticide Action Network’s Heather Pilatic put it on Huffington Post, “Wild pollinators and honeybees alike have been facing an increasingly toxic landscape since the introduction and rapid uptake of neonicotinoids in the late 1990s…these pesticides are prevalent, persistent, and more scientists confirm everyday that they are making bees sick (or dead) through a number of different mechanisms and routes of exposure.”

This accumulation of disturbing science raises a vital question: Does the Obama EPA have the backbone to take on the agrochemical industry during an election year and ban Bayer’s lucrative chemicals? The long-term status of the United States as a healthy habitat for bees, wild and cultivated alike, may hinge on the answer.