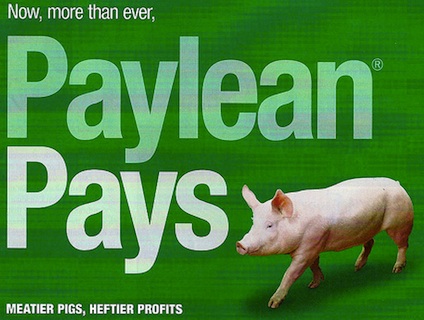 Remember that recent story by Helena Bottemiller (my post about it here) on how the US meat industry regularly doses hogs and cows with an additive called ractopamine that makes their meat leaner but also stresses them out?

According to Bottemiller, the FDA approved ractopamine back in 1999 based on industry-funded science that remains controversial. Traces of the chemical, made by the animal-medicine subsidiary of the pharma giant Eli Lilly, routinely make it into the meat supply. And that’s precisely why it’s banned in dozens of countries, including the entire European Union as well as China and Taiwan. These countries also refuse to accept meat imports that contain residues of it.

Turns out, the Obama administration isn’t just content to allow domestic meat producers to expose American consumers to Lilly’s chemical. It also wants to impose it on consumers throughout the world, even those who live in one of countries where it has been banned. The issue has emerged as a central dispute in trade talks with Taiwan, because inspectors in that nation have been refusing to allow in American meat that tests positive for ractopamine.

According to Focus Taiwan, the US government has suspended trade negotiations with Taiwan over the matter. And Bottemiller reports in a new article that the the US Trade Representative’s office has stepped up pressure on Taiwan’s newly reelected president, Ma Ying-jeou, to lift the ban, prompting protests from farmers there.

And indeed, the US Trade Representative’s office has been trying hard to pry open global markets to ractopamine-laced meat since the Bush II administration—a legacy that Obama has embraced. Just last July, the USTR’s chief agricultural negotiator (and former agrichemical industry lobbyist), Isi Siddiqui, rebuked the Codex Alimentarius Commission, which sets global food standards under the auspices of the UN and the World Health Organization, for refusing to sign off an a maximum acceptable standard for ractopamine residues in food.

According to Bottemiller, enshrining an acceptable level of ractopamine traces in Codex standards would “strengthen Washington’s ability to challenge other countries’ meat import bans at the World Trade Organization.”

US trade negotiators paint other nations’ refusal to accept ractomapine-containing meat imports as cheap protectionism, a way of avoiding competition with American producers. But Bottemiller shows that safety concerns about the chemical are real:

Elanco [the Lilly subsidiary that markets the chemical] mainly tested animals—mice, rats, monkeys and dogs—to judge how much ractopamine could be safely consumed. Only one human study was used in the safety assessment by Elanco, and among the six healthy young men who participated, one was removed because his heart began racing and pounding abnormally, according to a detailed evaluation of the study by European food safety officials.

Bottemiller quotes the scientist who led the European food safety panel that rejected the drug: “The main problem for us is that the safety of the product could not be supported with the data.”

Moreover, even US food safety officials have found the drug to be not nearly as innocuous Lilly’s Elanco unit promised:

When Elanco studied the drug in pigs for its effectiveness, it reported that “no adverse effects were observed for any treatments.” But within a few years of [ractopamine’] approval, the company received hundreds of reports of sickened pigs from farmers and veterinarians, according to records from the FDA’s Center for Veterinary Medicine.

USDA meat inspectors also reported an increase in the number of “downer pigs”—lame animals unable to walk—in slaughter plants. As a result of the high number of adverse reactions, the FDA requested Elanco add a warning label to the drug, and it did so in 2002.

But the warning label did not discourage factory-scale farms from relying on ractopamine to bulk up their animals quickly and cheaply. As I wrote in my last post on this topic, they calculated that stressing out their animals and sacrificing a few to ractopamine-related deaths was a cheap price to pay for overall higher meat yields.

Rather than protecting the public health by reassessing the FDA’s approval of ractopamine, the Obama administration has chosen to protect the meat industry’s interests by trying to force it on consumers worldwide. Change we can believe in? Nope: agribusiness as usual.