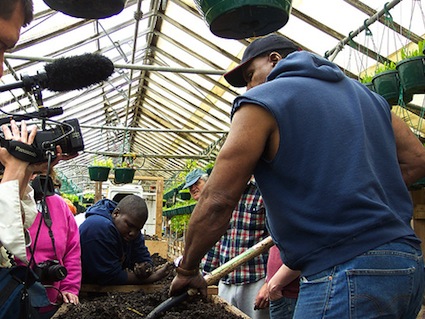 Will Allen of Growing Power gives a composting workshop in inner-city Milwaukee. <a href="http://www.flickr.com/photos/mjmonty/2041607366/">mjmonty</a>/Flickr

One of the most effective arguments against transforming our food system is the class one: Sure, it’s great if well-heeled coastal urbanites want to pay up for food grown without chemicals, but that kind of agriculture can never be productive enough to feed poor people. For that reason, we need monocropped fields of corn and soy, factory-scale livestock operations, and annual monsoons of agrochemical.

In this view, food system reform advocates like me are raging elitists, and Big Food institutions like McDonald’s and Walmart are populist champions of the working poor.

I call it the two-food-systems solution: a niche local-organic one for the few willing to pay up; a dominant chemical-driven one for everyone else. In essence, that model describes what has evolved here in the United States over the past 20 years: vibrant islands of farmers markets and CSAs in a vast swamp chemically produced calories.

But what if we transformed the entire food system—precisely because it so ill-serves low-income people, who do the behind-the-scenes dirty, dangerous work to keep it humming?

At a conference I attended last May in DC, I heard Eric Schlosser—whose seminal 2001 book Fast Food Nation exposed the brutal working conditions that underpin what he called “all-American meal”—deliver a brief, damning refutation of the claim that Big Food is somehow the anti-elitist champion of America’s working poor. The context of Schlosser’s remarks was somewhat ironic, for he was introducing perhaps the most elite proponent of sustainable agriculture on Earth: His Royal Highness, Prince Charles of Wales, who went on to give an equally lucid and clear-eyed indictment of global industrial agriculture.

Schlosser has since teamed up with Will Allen, the celebrated Milwaukee-based urban agriculturalist and food justice champion, to revise the speech. The result was published as the introduction to a new short book featuring Prince Charles’ address.

Last week, The Atlantic reprinted the Schlosser/Allen essay on food and class on its website. It’s well worth reading. Below is a video of Schlosser’s actual talk, followed by a a few highlights from the published essay.

Pesticides are poisons. They have been carefully designed to kill insects, weeds, funguses, and rodents. But they can also kill human beings. The Environmental Protection Agency has estimated that every year, 10,000 to 20,000 farm workers suffer acute pesticide poisoning on the job—and that’s a conservative estimate. Farm workers, their children, and the rural communities where they live are routinely exposed to these toxic chemicals. And what are the potential, long-term harms of the pesticides now being sprayed on our crops? Brain damage, lung damage, cancers of the breast, colon, lung, pancreas, and kidney, birth defects, sterility, and other ailments.

The wealthy will always eat well. It is the poor and working people in the United States who need a new, sustainable food system more than anyone else…African Americans and Hispanics are more likely to be obese than non-Hispanic whites, and more likely to be poor. As upper-middle-class consumers increasingly seek out healthier foods, the fast food chains are targeting low-income, minority communities—much like the tobacco companies did, when wealthy and well-educated people began to quit smoking.

Access to good, healthy food shouldn’t be reserved for a privileged few. It should be a basic right. And the changes being made at the community level need to be translated into changes at the state and federal level. At the moment, the law too often favors corporate interests over the public interest. The fast food chains and agribusiness companies are earning large profits, while shifting even larger costs onto the rest of society. The game has been rigged in favor of the powerful and well connected, at the expense of everyone else.