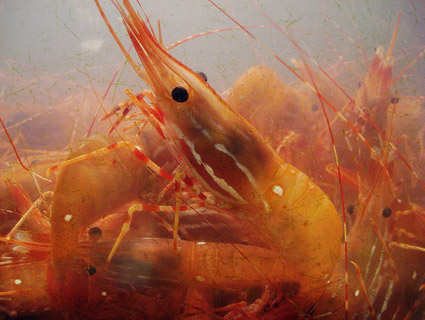 Marketing campaigns like Taco Bell’s, along with Red Lobster’s periodic “Endless Shrimp” promotions, crystallize shrimp’s transformation from special-treat food to everyday cheap fare. What happened? The answer lies in the rise of factory-scale shrimp farms over the last generation. Twenty years ago, 80 percent of shrimp consumed here came from domestic wild fisheries, with imports supplying the rest. Today, we’ve more than flipped those numbers: the United States imports 90 percent of the shrimp consumed here. We now bring in a staggering 1.2 billion pounds of it annually, mainly from farms in Asia. Between 1995 and 2008, the inflation-adjusted price of wild-caught Gulf shrimp plunged 30 percent.

It turns out, not surprisingly, that plates mounded with cheap shrimp float on a veritable sea of ecological and social trouble. In his excellent 2008 book Bottomfeeder: How to Eat Ethically in a World of Vanishing Seafood, the Canadian journalist Taras Grescoe took a hard look at the Asian operations that supply our shrimp. His conclusion: “The simple fact is, if you’re eating cheap shrimp today, it almost certainly comes from a turbid, pesticide- and antibiotic-filled, virus-laden pond in the tropical climes of one of the world’s poorest nations.”

Lest anyone think otherwise, these factory farms generate poverty in the nations that house them, as Grescoe demonstrates; they privatize and cut down highly productive mangrove forests that once sustained fishing communities, leaving fetid dead zones in their wake.

And now, a new study from University of Oregon researcher J. Boone Kauffman finds that the flattening of Southeast Asian mangrove forests is devastating in another way, too, and not just for the people who have been sustainably living in them for generations. Mangroves, it turns out, are rich stores of biodiversity and also of carbon—and when they’re cleared for farming, that carbon enters the atmosphere as climate-warming gas.

Kaufman estimates that 50 to 60 percent of shrimp farms occupy cleared mangroves, and the shrimp that emerges from them has a carbon footprint 10 times higher than the most notoriously climate-destroying foodstuff I’m aware of: beef from cows raised on cleared Amazon rainforest.

Kaufman calls the shrimp-farming style that prevails in Asia “the equivalent of slash-and-burn agriculture,” because farm operators typically “only last for 5 years or so before the buildup of sludge in the ponds and the acid sulfate soil renders them unfit for shrimp,” he told Science.