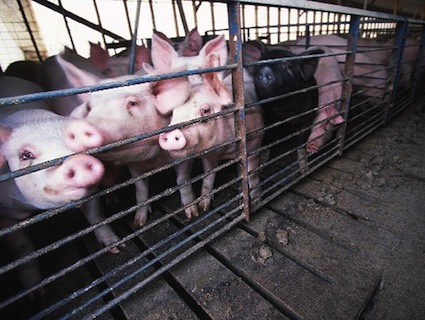 The US Meat Export Federation has a straightforward mission: to open foreign markets to the output of our vast factory animal farms. The group represents all major players in the US industrial meat machine: the dominant meatpackers (Cargill, Smithfield, Tyson, and JBS); the big farm interests that grow their feed (American Soybean Association, the Iowa Corn Growers Association); and the agrichemical giants that supply corn farmers with inputs (Monsanto and Dupont).

Now, I deplore the US meat industry for all of its many abuses, but I’m not shocked that it has formed an interest group to push its suspect products on overseas markets. But this? It’s nuts. Under a USDA initiative called the Market Access Program, US taxpayers will be cutting a check to the US Meat Export Federation for $19.7 million in fiscal 2012.

Other outfits that wll receive MAP largesse of at least $5 million include US Grains Council (members include Archer Daniels Midland, Cargill, and Monsanto); the Cotton Council International (Cargill); the USA Poultry and Egg Council (Tyson, Pilgrim’s Pride, and Cargill, again).

In all, MAP will spend a cool $200 million in ’12 trying to grease the wheels of trade for US agribusiness and its web of trade groups.

Now, MAP has been around and funneling taxpayer cash into promoting the export of industrial food since 1985, as this 1993 General Accounting Office report (PDF) shows. In its earlier incarnations, the program made even more outrageous gifts—the program cut checks just not to trade groups but rather to specific companies. Major recipients included Tyson, Pillsbury, Seagrams (yes, the liquor giant), Jim Beam (ditto), Campbell’s Soup, Nestle, Hershey’s, Kraft, and even McDonald’s. And even then, the Meat Export Federation and the Grains Council were enjoying tens of millions in annual taxpayer infusions.

Maybe in the ’80s, such blatant corporate giveaways could be justified under the rubric of “feeding the world” and “helping the family farm.” But we now know that dumping US commodities on foreign markets drives smallholder farmers out of business, spreading poverty and hunger (see Haiti, and post-NAFTA Mexico ); we know that exporting US-style diets generates chronic problems like obesity and diabetes; and we know that the promoting US agribusinesses like Monsanto is not the same as supporting US farmers.