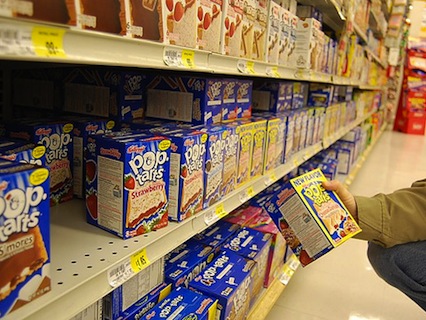 Those two crops suffuse our food system: they provide the sweetener for soft drinks, the cooking oil for French fries, feed for the animals we eat, and countless ingredients used by food processors. By 2003, the Grocery Manufacturers of America was already reckoning that 75 percent of processed food in supermarets contained GMO ingredients. So if eating a bowl of cereal made from GMO corn, or a Pop Tart sweetened with high-fructose GMO corn syrup, posed an immediate threat, or a we’d know it by now. Millions of people do it every day. So for what public-health people call acute effects, GMOs have more or less been proven safe.

But what about chronic effects—slow-moving, unspectacular conditions that could take years to detect, much less to diagnose? Here we’re on murkier ground. GMOs have been on the market for less than a generation: not a large span of time for gauging long-term effects on a population.

And to be sure, the US is riddled with chronic health conditions like diabetes, obesity, and heart disese. The CDC reports that one in two Americans now have such conditions, and that seven of every 10 deaths in the US can be attributed to them. According to a 2010 study in the Journal of the American Medical Association (summarized here), the rate of chronic conditions among US children jumped from 12.8 percent in 1994 to 26.6 percent in 2006, with asthma, obesity, and behavior/learning disorders leading the way.

Clearly, such trends are highly complex and can’t be explained by any one factor. And the US diet, with its reliance on calorie-dense, additive-laden processed food, went downhill long before the introduction of GMOs in the ’90s. But did the introduction GMOs make the whole witches brew of US processed food even worse, and add subtly to its already-bad health effects? To me, it’s plausible.

A new backgrounder (downloadable here) on GMO food from Food and Water Watch shows, yet again, that studies on the long-term effects of of GMOs are few and far between. The FDA, for its part, takes a gentle approach to examining the safety of such food. “In seeking approval, a company participates in a voluntary consultation process with the FDA, and the agency classifies the GE substances either as ‘generally recognized as safe’ (GRAS) or as a food additive,” FWW reports. Since 1998, the agency has awarded GRAS status to 95 percent of the GMOs the industry has put forth.

As for independent research, the industry has managed to severely limit it by using its patent-protected seed licensing agreements to prohibit scientists from growing GMO crops for research purposes. Moreover, government funding for such research is scant, and industry research funding tends to flow to finding the next novel trait, not food safety. So research on the long-term effects of eating GMOs is surprisingly thin, especially considering that tens of millions of people are doing it every day.

But here’s the kicker: scientists who do manage to conduct independent research have tended to find disturbing results, FWW shows:

A 2009 International Journal of Biological Sciences study found that rats that consumed GE corn for 90 days developed a deterioration of liver and kidney functioning. Another study found irregularities in the livers of rats, suggesting higher metabolic rates resulting from a GE diet. And a 2007 study found significant liver and kidney impairment of rats that were fed insect-resistant Bt corn, concluding that, “with the present data it cannot be concluded that GE corn MON863 is a safe product.” Research on mouse embryos showed that mice that were fed GE soybeans had impaired embryonic development. Even GE livestock feed may have some impact on consumers of animal products: Italian researchers found biotech genes in the milk from dairy cows that were fed a GE diet, suggesting the ability of transgenes to survive pasteurization. [Note: there are footnotes to each study mentioned in the FWW report.]

Now, it’s important to stress that none of this research definitively proves that GMOs are contributing to the vast load of chronic conditions affecting Americans. We need more research—independent of industry influence. But surely, it repudiates that FDA’s practice of casually granting “generally regarded as safe” status on GMO foods based on industry assurances. But I, for one, am trying my best to avoid the stuff—which isn’t very hard to do, if you stay away from processed junk and generally try to know where your food comes from. Which, come to think of it, is a solid dietary strategy even if it doesn’t turn out that GMOs are slowly doing us harm.