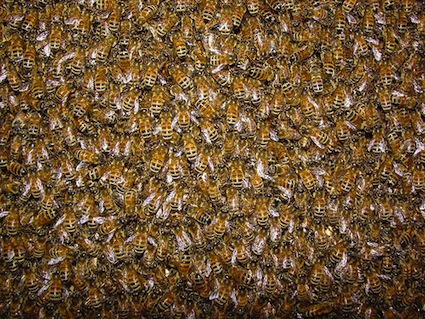 Is a pesticide marketed by Bayer—used on millions of acres of US corn—the factor that’s pushing honey bees into steep annual die-offs that have become known as Colony Collapse Disorder?

A ragtag group of commercial beekeepers has gathered an impressive cache of evidence supporting that claim. In series of articles starting December 2010 on Grist, I dug into the evidence and told the story, which features discredited studies used by Bayer to push the pesticide through EPA registration, an alarming study from a USDA scientist, and more.

I fully expected my work to spark stories in larger, more influential mainstream media, which might in turn inspire progressive Congresspeople to get involved, or force the EPA to reconsider.  I mean, we’re talking about a pesticide whose range extends to nearly the entire US corn crop, and a species critical to producing about a third of the food we eat. Instead, though, silence. In the 2011 growing season, corn farmers once again planted seed treated with Bayer’s suspect bug killers, with nary a peep from Congress or The New York Times, Washington Post, etc.

Well, now, a mainstream-media legend has taken note and filed an excellent report on the topic. Trouble is, Dan Rather isn’t of the mainstream media anymore; he now plies his trade on the upstart network HDnet (still winning Emmy’s though!). As the below segment will show, Rather’s reportorial chops remain intact. I hope other journalists take note—the bee collapse/pesticide story is one that needs to be heard and debated. The bee section of Rather’s show ends at about the 27-minute mark. (Hat tip to the ever-excellent Pesticide Action Network.)