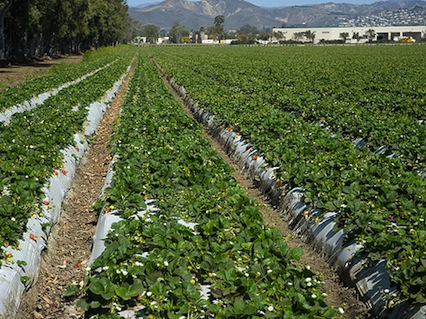 In the United States, when people tell you to “eat your veggies,” they are essentially urging you to take a bite out of California—or, more to the point, take a a big swig of its increasingly scarce water supply.

How much do we rely on California for fruits and veg? With its rich soils, variety of microclimates, long growing season, and huge geographical footprint, California should be a major ag producer—certainly a regional food-production hub for the western US. But its sheer dominance of US fruit and veg production (numbers from the the California Department of Food and Agriculture (PDF)) is dizzying.

As for fruit, I get that 86 percent of lemons and a quarter of oranges come from there; its sunny climate makes it perfect for citrus, and lemons store relatively well. Ninety percent of avocados? Fine. But 84 percent of peaches, 88 percent of fresh strawberries, and 97 percent of fresh plums?

Come on. Surely the other 49 states can do better. And they will likely have to do better—California’s fruit-and-veg empire rests on a foundation of highly subsidized and increasingly scarce irrigation water. And that situation will only worsen as climate change makes droughts more prevalent in the western US, as this excellent Grist article by Matt Jenkins demonstrates. It makes sense to think of California’s bounty as a kind of bubble puffed up by a history of cheap and unsustainable irrigation-water access—a bubble that will sooner or later have to burst.

But as the explosive recent growth in farmers markets nationwide shows, people are increasingly looking for seasonal produce that emerges from their own food-sheds, not from California’s teetering industrial-vegetable complex.

The effort is even getting a boost from urban agriculture, especially in rust-belt cities where abandoned land is plentiful. According to a new study from Ohio State researchers, people in Cleveland are already spending a cool $1.5 million on fruits and vegetables grown within the city. I visited Cleveland in the summer of 2010, and what I saw was a beautiful city teaming with robust community gardens and even commercial farms.

According to the Ohio State study, if Cleveland’s citizens and government made a concerted effort to utilize its vast base of abandoned land for growing food, it could dramatically ramp up production—and not just of fruits and vegetables, but also meat, eggs, and honey:

The first scenario utilizes 80 percent of every vacant lot for growing produce and raising chickens, with beehives being kept on 15 percent of those unoccupied lots. This arrangement, the study found, can meet between 22 and 48 percent of Cleveland’s fresh produce demand, 25 percent of its poultry and shell egg needs, and 100 percent of the honey consumed in this city of almost 400,000 residents.

And if if just 9 percent of residential lawn property is brought under the roto-tiller, and some commercial-building roofs are devoted to agriculture, Cleveland could become nearly self-sufficient in fruit, vegetables, chicken meat, eggs, and honey, the study concludes. And in doing so, as much as $115 million in food expenditures would remain within Cleveland, building wealth inside the city instead of leaking out to shareholders in large grocery and fast-food chains. Detroit, which I also visited in summer in 2010, has a similar situation with regard to growing its own food.

Meanwhile, reports The New York Times, the depressed economy is inspiring a vegetable-gardening resurgence in rural and urban areas alike:

It is not just eastern Kentucky. Vegetable gardening has been on the rise across the country, according to Bruce Butterfield, research director at the National Gardening Association, driven by rising food prices and a growing contingent of health-conscious consumers. Garden-store retailers have reported increased sales over the past two years, he said, and many community gardens have waiting lists.

“Our sales have skyrocketed,” said George Ball, chief executive of Burpee, one of the largest vegetable-seed retailers. The jump, he said, began around the time Lehman Brothers collapsed in 2008, when anxiety about money started to rise.

I mention all of this to make the point that yes, we are way too dependent on California’s water-challenged agriculture; but moving away from it need not mean scarcity and poor diets.