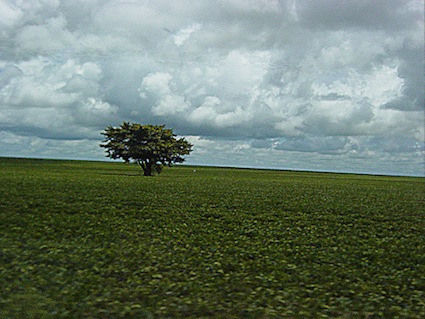 A couple weeks ago, the government of Mozambique offered farmers from Brazil 50-year leases on 15 million acres of land: an area equivalent to a bit more than half of the acreage under cultivation in Iowa.

According to Reuters, the price is right: $5.30 per acre, vs. a going rate of as much as $8,800 per acre in Brazil. Understandably, Brazilian farmers are jumping at the offer.

Why the dirt-cheap offer? The Mozambique government is looking for farming expertise. The farmers the governemnt is courting operate in Brazil’s Cerrado region, a vast, scrubby savanna with unpromising, acidic soil. They operate on the frontier of industrial agriculture: In just 30 years, they have turned what was once considered an agricultural wasteland into one of the globe’s most productive sources of corn, cotton, and, most prominently, soy. The land on offer in Mozambique (like Brazil, a former Portuguese colony) is similar to that of the Cerrado.

So Brazil’s industrial-ag frontier has jumped the Atlantic and is about to take root in Africa. To grasp the significance of this development, it’s important to understand the place Brazil’s Cerrado has come to occupy in the global industrial-agriculture chain.

When Portuguese settlers arrived in Brazil in the 16th century, they marvelled at the fertility of the region’s coastal forest—and promptly began to clear-cut it for sugar and coffee production. But a vast swath of the the Brazilian interior resisted colonial agriculture: a scrubby savanna region that the settlers dubbed the Cerrado, Portuguese for “closed.”

For the purposes of Brazil’s Portuguese rulers, the Cerrado was useless; its acidic soil couldn’t support the desired crops. And so the situation remained until the early 1980s, when scientists discovered that treating the soil with lime, along with heavy doses of mined phosphorous fertilizer, made it hospitable to US-style industrial agriculture. 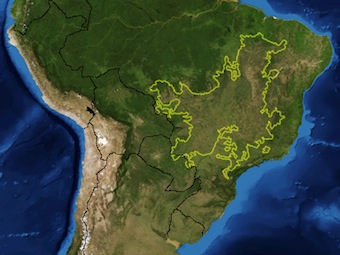 Brazil’s cerrado, outlined: both the globe’s most biodiverse savanna, and industrial agriculture’s frontier Pfly/Wikimedia CommonsWhat followed was a stunning agriculture boom in the Cerrado. Enormous tracts of land came under the plow. In its entirety, the Cerrado region’s total land mass covers 494 million acres—an area about 20 percent larger than all the land under crop production in the United States. Already, 60 percent of that land has succumbed to agriculture, reports Fred Pearce in a recent article in Yale Environment 360.  Since the Cerrado came under the plow, Brazil has catapulted from a non-entity in the global soy market to the globe’s second-leading producer, after the US.

While Portuguese rule has long since melted away in Brazil, Cerrado agriculture can be described as at least partially neo-colonial. It’s true that Brazilian magnate and politician Blairo Maggi runs one of the largest soy-processing firms in the world, but US and European agribusiness giants like Cargill, Archer Daniels Midland, Monsanto, and Syngenta largely dominate the trade. They provide the genetically modified seeds and agrichemical inputs, and they buy, trade, and process the bulk of the soy and cotton. They are moving rapidly into Brazil’s ethanol industry, which converts sugarcane, much of it grown in the Cerrado, into car fuel.

And as prices of ag commodities like soy rise, US and European investors are moving in. For his Yale Environment 360 piece, Fred Pearce visited “giant industrial farms, many funded by U.S. and UK capital.” He writes:

Some 40 kilometers down a track off the main road to Brasilia, I found Agrifirma, the 42,000-hectare [about 100,000 acres] agricultural empire of Jacob (Lord) Rothschild, scion of one of Europe’s richest families, which grows seemingly endless fields of corn, soya, cotton, and coffee. At lunch I met a dapper British financier and his wife, who had flown in to the Agrifirma airstrip that morning to survey their investment, and a European lottery entrepreneur spending his winnings from other peoples’ bets on another farm down the road. Close by was George Soros’s Adecoagro enterprise.

Despite its traditional inhospitality to colonial agriculture, the Cerrado has actually been quite useful for a wide variety of beings for millennia. The region has supported human populations for 10,000 years, without a “major impact on the integrity of the ecosystem,” reports Conservation International. Even now, 30 years after the advent of industrial agriculture, 38 indigenous ethnic groups live in the Cerrado. Meanwhile, a stunning variety of flora and fauna thrive in parts that haven’t been flattened over for soy. World Wildlife Fund calls it “one of the richest places of biodiversity in the world,” and it is widely considered the globe’s most biodiverse savanna.

And the Cerrado plays a vital role in the health of other ecosystems. World Wildlife Fund reports that “numerous important tributaries of the Amazon River? originate in the Cerrado,” and its waterways also “feed the world’s largest wetland, the Pantanal.”

But for global agribusiness, the Cerrado has no value as homeland, habitat, or source of clean water. It represents a blank slate to be exploited. With biofuel use on the rise, demand for meat (and thus feed grains) growing, and the prime farmland of the US and Europe already producing at full throttle, the opening of the Cerrado gave agribusiness a vital new source of cheap commodities, as well as a booming new market for agrichemicals and GMO seeds.

But the Cerrado boom is showing signs of levelling off. All of that cash from investors like Rothschild and Soros has driven land prices up; environmental concerns such as the ones I’ve raised have inspired the Brazilian government to initiate a modest plan to protect some of what’s left of the savanna. One Brazilian agribusiness flack complained to Reuters that plowing up new swaths of the Cerrado carries “enormous” risks, because of “high costs and stiff environmental regulations.”

Enter Mozambique. Using technologies developed to tame the Cerrado, it could emerge as industrial agriculture’s next frontier. On one level, it’s not hard to understand why Mozambique to hand over land to Brazil’s expert savanna-land farmers. Most of the nation lives in poverty. According to the World Food Program, “54 percent of the population lives below the national poverty line; 63 percent of rural children live in absolute poverty; and 34 percent of households are food insecure and face perpetual hunger.”

But the rub is, this deal isn’t about feeding Mozambique; it’s about producing commodities for export markets. As the Financial Times reported, the main allure of the deal for Cerrado farmers—apart from essentially free land—is increased proximity to lucrative markets in the Middle East and Asia. Granted, some of the profits from that bounty will likely trickle down to Mozambique’s people in the form of low-wage farm work. According to the FT, the deal stipulates that “90 per cent of workers hired should be Mozambican.” Nevertheless, huge plantings of monocrops like soy are highly mechanized and require few workers.

For many observers, Cerrado-style agriculture, with its reliance on massive plantings of agribusiness-friendly crops, is key to “feeding the world.”  The Economist, for example, recently hailed the “miracle of the Cerrado” and called for its agriculture style to be “exported” to Africa. I think the real answers lie elsewhere.