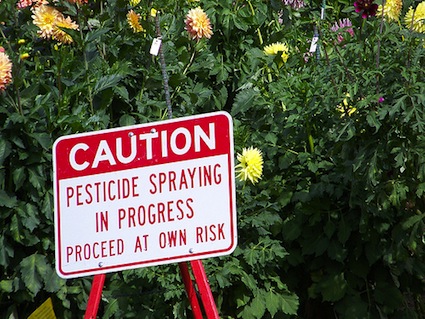 I’ve been writing a lot about how the agrichemical industry leverages its failures to to sell ever more toxic herbicides, insecticides, and genetically modified crops to replace ones that have lost effectiveness, trapping farmers on an ever-accelerating pesticide/technology treadmill. In the latest major media article on the rise of “superweeds” resistant to Monsanto’s flagship herbicide, this one from Bloomberg BusinessWeek, Monsanto CEO Hugh Grant makes my point for me:

Monsanto Chief Executive Officer Hugh Grant says competitors’ efforts to develop their own herbicide-tolerant crops isn’t a threat to the company’s flagship business. Seed companies will cross-license each others’ genetics to create crops able to withstand multiple weedkillers, he says, and spraying fields with a mix of herbicides will kill the superweeds and give Roundup Ready crops new life. Monsanto itself is adding resistance to dicamba, an older weedkiller, to Roundup Ready crops for sale by 2015. “The cavalry is coming,” Grant says.

Dicamba, it should be noted, is listed by Pesticide Action Network as a “bad actor”—it’s an established developmental/reproductive toxin with the potential to contaminate groundwater. If Dicamba Ready crops become anywhere near as prolific as their Roundup Ready cousins, the result could be disastrous. Farmers are currently applying so much Roundup that US Geological Survey researchers are finding it at “significant” levels in water and air samples in farm states. Roundup enjoys a reputation as a relatively benign herbicide, but new research on its effect on both soil and human health is undermining that assumption.