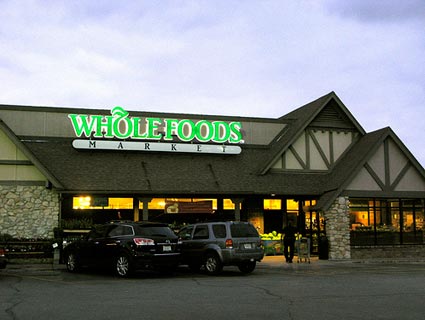 For the last two weeks, Whole Foods promoted frozen products made by Saffron Road, maker of all-natural halal foods, in celebration of the Islamic holy month of Ramadan. Emphasis on these products, which include famous Indian and Thai dishes, drew the ire of right-wing bloggers like Debbie Schlussel, who in late July blasted the Whole Foods promotion on her blog with a story titled “Anti-Israel Whole Foods Wishes You a Happy Ramadan.” According to various media outlets, the backlash forced Whole Foods to cancel the promotion. This morning, the Houston Press said it obtained an email from Whole Foods that reads: “It is probably best that we don’t specifically call out or ‘promote’ Ramadan…We should not highlight Ramadan in signage in our stores as that could be considered ‘Celebrating or promoting’ Ramadan.” Not surprisingly, commenters on Twitter spending the better part of the morning blasting the company for the leaked message. Reza Aslan, an expert on Islam, tweeted: “Under pressure from Right Wing Nuts, Whole Foods cancels #Ramadan promotion. Right. BC my local Whole Foods is full of Republicans. Morons.”

But not so fast: the grocery store says the promotion is still on. Whole Foods spokeswoman Libba Letton assured me that “Whole Foods Market is NOT cancelling our current halal promotion,” and that the confusion stemmed from one branch getting ahead of itself (though she wouldn’t tell me which one). “We have 12 different operating regions and one region reacted by sending out directions to promote halal and not specifically Ramadan after some online negative comments.” She insists the email was not company-wide: “We’re excited to be offering high quality halal products for our shoppers and we stand behind them and our promotion of them, just like we do with other seasonal and holiday products.” As for any discipline for the branch that sent the email, Letton says “the situation was addressed.”