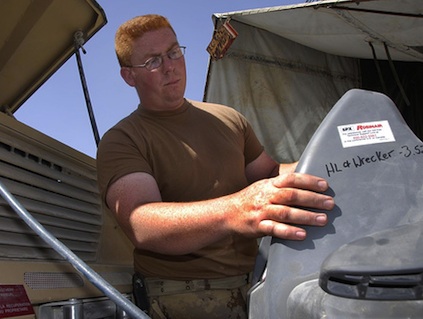 When you station hundreds of thousands of people in hot places to fight wars, it costs something to keep them reasonably cool. How much?

According to NPR, the military spends $20 billion per year on air conditioning in Afghanistan and Iraq. Is that a lot? Here’s NPR:

That’s more than NASA’s budget. It’s more than BP has paid so far for damage during the Gulf oil spill. It’s what the G-8 has pledged to help foster new democracies in Egypt and Tunisia.

To choose an example from my world, that’s more than twice as much as we spend annually on the National School Lunch Program. I would argue, as I have before, that investing significantly more in school lunches is an urgent national priority. School lunches are society’s most concrete, tangible way of transmitting foodways to rising generations. Sure, we pass on foodways in home kitchens and in our built infrastructure of restaurants/eateries, and well as through advertising; but those are in the private sphere. The public-school cafeteria is where we create a public vision of what the food system should be like. In short, it’s the public contribution to the formation of kids’ eating habits. And the eating habits we develop as kids largely determine the food choices we make as adults. If that weren’t true, the food industry wouldn’t be dropping $1.6 billion every year marketing to kids.

Unhappily, what we’re teaching kids now in our public school cafeterias is that sad processed junk counts as food. Cafeteria administrators have something like a dollar a day per kid to spend on lunch ingredients.

In 2009, the Berkeley restaurateur and sustainable-food advocate Alice Waters proposed in the New York Times that we significantly increase the school lunch budget. She was roundly mocked, even in the progressive blogosphere, for making such an extravagant proposal. We simply can’t afford to pay much more than we already are, her critics insisted. They won the day—last year’s school lunch reauthorization, despite much self-congratulation by the Obama administration, delivered only a token increase.

So, we’re still teaching millions of schoolchildren that sad processed junk counts as food. And now we know we’re spending twice as much on AC as we fight two wars of dubious necessity. Who’s being extravagant, again?