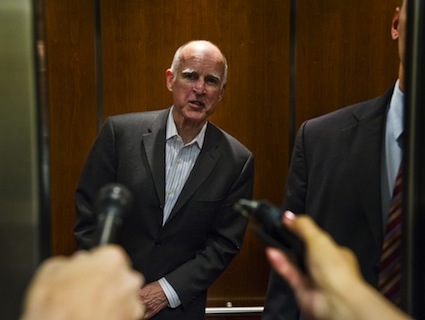 Jerry Brown: one more chance to stand up for farm workers. Sacramento Bee/Zuma

Back in 1975, a young, newly elected California governor named Jerry Brown signed into law a historic bill recognizing the right of his state’s farm workers to unionize. Nicknamed “Governor Moonbeam” for his new-age tendencies, Brown might have been a bit spacey, but he didn’t waver in standing up to his state’s powerful agribusiness interests.

In the decades since, the protections offered by that law have eroded. Farmworkers say field bosses use intimidation to keep people from voting to form unions. The United Farm Workers have been pushing for years for new protections that would make it easier for workers to cast their votes without being under the noses of the bosses. Advocates have managed to push such a bill through the California legislature four times in recent years. And each time, Arnold Schwarzenegger—unapologetically carrying water for the state’s powerful agribusiness lobby—vetoed it.

Now The Arnold is gone, and that ’70s-era governor is back—again deciding the fate of legislation that would improve the lot of the thousands of people who work in California’s fields. But this time, Jerry Brown came down on the side of the bosses. On Tuesday, he vetoed the the Fair Treatment for Farm Workers Act.

He had signed the original 1975 act at a press conference with much fanfare. Jerry Brown 2.0 rejected the 2011 bill hidden away in his office, accompanying the veto with a weasely memo (PDF). In that sad document, the onetime-firebrand wrings his hands over the possibility of “drastic changes” to the state’s farm-labor law.

According to LA Times, what Brown is really up to is an Obamaesque lurch to the center. Reporters Patrick McGreevy and Anthony York write:

The governor’s veto—on the heels of a budget deal struck with Democrats alone—helps keep him in the political center. Brown has often referred to such centrism as “the canoe theory” of governing: paddling a little on the left, a little on the right and staying in the middle.

So the governor paddled right for the agribusiness lobby over whether the state should expand the right to organize. Now he has the perfect opportunity to swing left for farmworkers by banning methyl iodide, a fumigant so reliably carcinogenic that scientists use it to introduce cancers cells in lab tissue. (For more on methyl iodide—the whole scandalous story of how it came into use in the first place—go here).

Pesticide Action Network reports that back in March, Brown agreed to reconsider his predecessor’s decision to green-light methyl iodide (which marked the Governator’s final gift to the agribusiness lobby, made just before he exited office). But so far, Brown has done nothing to stop application of the deadly pesticide—and already, two farms have used it, PAN says. The group is urging people to call Brown’s office to demand that he ban it.

I should emphasize that this is a national issue, not just a California one. The farmworkers affected by the state’s laws toil within its borders, but their produce feeds the entire nation. When California’s industrial-scale farmers intimidate workers or expose them to deadly pesticides, they’re doing it in your name, too.