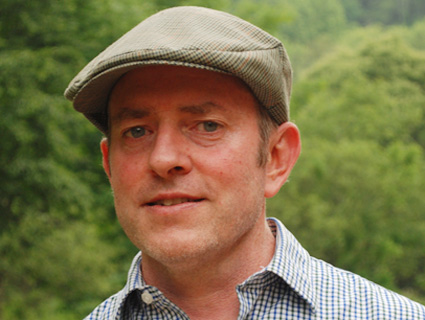 Hi. My name is Tom Philpott, and I’ll be your food blogger today. (Some of you may know me from my previous stint at Grist.) Or, to be precise, your blogger on the politics of eating and farming, both of which I actively engage in. There will even be occasional recipes.

The most surprising thing about the menu I’m offering is that it exists at all. A decade ago, it wouldn’t have occurred to a national political publication to hire a full-time food writer. Food wasn’t serious—it belonged in glossy food-porn magazines or in the lifestyles pages of newspapers. That’s how I used to think of it—from my days as a muckraking student journalist at University of Texas to finance reporter in Mexico City, cooking was my refuge, my way of withdrawing from the messy worlds of politics and writing.

But then, after moving to New York City to work as a financial journalist in the late 1990s, I got involved in a community garden near my Brooklyn neighborhood through my girlfriend Alice Brooke Wilson, who worked for the city’s GreenThumb program. In Hollenback Garden on Washington Ave., I learned that growing my own food yielded more than just great tomatoes. It also opened space for a diverse group of people to get to know each other. I saw that in the most hardscrabble neighborhoods, gardens were often the most vibrant, alive, safe spaces. Often, they served as a neighborhood’s sole source of fresh produce. 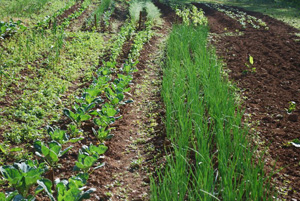 Maverick Spring: Onions and kale take the sun at Maverick Farms, spring 2011. I also saw that then-Mayor Rudy Giuliani reacted to the success of these highly productive spaces by declaring them a form of “Communism” and vowing to pave them over. It was only through committed organizing by the city’s gardeners, with a large assist from then-New York Attorney General Eliot Spitzer, that most of the gardens staved off Giuliani’s bulldozers. The experience taught me that food is deeply political—its terrain is characterized by vast inequalities of power and subject to its whims.

By 2004, Alice Brooke and I decided to do something crazy. Along with a couple of friends, we moved down to the Appalachian mountains of western North Carolina to take over her family’s small vegetable farm. I’ve been here ever since. We’ve learned a lot from the experience—enough lost illusions about living off the land to fill a novel. Here’s one: Small-scale vegetable farming is one of the few professions that makes blogging look lucrative. Here’s another: Cute laying hens sometimes get mangled by demonic predators—and the only thing you can do is drive an ax through the poor bird’s neck. If you can. I can never manage to do the dirty deed, and my fellow farmers mock me mercilessly for it.

But the bottom-line lesson I’ve learned from the Maverick Farms experience is this: a healthy politics needs healthy farms—and vice versa. Creating food systems that make make sense—alternatives to the destructive industrial model—is community work; small-d democratic work. Along the way, I joined the staff of the pioneering environmentalist Web ‘zine Grist, which provided a home for my work when few publications saw the need for regular food-politics coverage. 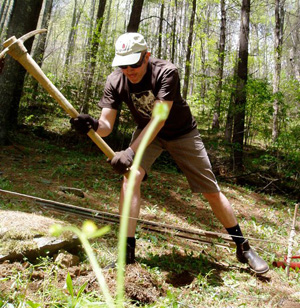 The author helps build a fence for the chicken yard, spring 2011. I’ve been thrilled to see the debate over the issue widen and deepen over the last few years. We’ve started to remember what most people for most of history could ill afford to forget: that food doesn’t magically appear from nowhere, neatly shrink-wrapped and ready for the grill. Despite the food industry’s multi-decade, multibillion-dollar marketing blitz, people increasingly realize once more that the food on their plates has a history. As Michael Pollan put it at the end of his landmark Omnivore’s Dilemma (2006), “we eat by the grace of nature, not of industry, and what we’re eating is never anything more or less than the body of the world.”

Our food system has massive impacts on our fellow humans as well. Every bite we take represents tremendous amounts of labor, most often under brutal conditions. Indeed, a food system designed for maximum production of cheap food fits in perfectly with an economy characterized by decades of stagnant wages. Just last week, a Wall Street analyst reckoned that a recent hiring spree by McDonald’s accounted for more than half of the paltry 54,000 jobs created in May.

In this blog, I’ll be catering to the growing hunger to know more about the stuff we invite into our bodies daily. I will cover everything from how a shadowy magnate gambles with public health to provide you with dirt-cheap breakfast eggs; to how a devastated post-industrial city is reinventing itself as a sustainable-ag mecca; from industry capture of the regulatory agencies like the FDA and USDA; to people making the industry irrelevant by banding together to create their own alternatives; from the horror of industrial chicken breasts to the genius of a good sandwich. I’ll be writing from the perspective of someone who’s directly engaged in the movement to transform the food system. But it won’t be all about eating your organic oatmeal. Indeed, I’d rather have an organic oatmeal stout.

Let’s get to the meat of the matter. ¡Buen Provecho!