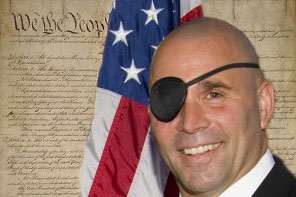 Three dollars and thirty-seven cents. That’s the average benefit an individual on government food stamps receives each day, according to the USDA. Here in DC, it’s enough to buy, say, a box of cereal or a head of lettuce or a couple cans of beans. Would you call that $3.37 a day “too darn comfortable”?

Nick Popaditch, a Republican House candidate in California and retired Marine, did just that last week in a debate with opponent Rep. Bob Filner (D-Calif.). As Think Progress reported, an audience member at the debate asked Popaditch how, if elected, he would ensure there were “no further cuts are made to the food stamp benefits.” I’ll bet the questioner didn’t expect this response:

What would I do to make sure no further cuts are made to food stamp benefits? Wow. Once again, I recognize there’s a difference between an entitlement and a promise. Now that would fall under the category of an entitlement. Now I believe in a safety net, but I certainly don’t think we need to make it too darn comfortable down there on that safety net. I’m not a cruel man, but I think we absolutely need to make these systems not as comfortable as they are now.

“Too darn comfortable”? $3.37 a day? At a time when the shelves of food banks across the country are bare due to skyrocketing demand, when the country’s largest food charity is helping to feed 37 million Americans (including 14 million children) each week, when more than a third of households needing food from shelters have to choose between food and other essentials including rent and health care, Popaditch’s remark is as tone-deaf and off the mark as you’ll hear all election season.

Here’s the video of Popaditch making the remark, via Think Progress: