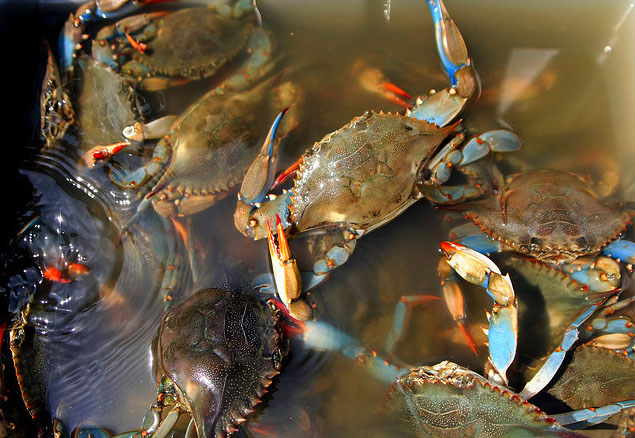 In addition to efforts to convince us that the oil is all gone in the Gulf (it’s not), the government has been promoting the idea that seafood from the region is totally safe. Obama himself has been banging this drum, noshing on plenty of seafood during his trip to the region last week, serving it up at his birthday bash, and of course, taking a dip in the Gulf with his daughter.

But how safe is it really? A study published this week in the Journal of the American Medical Association suggests that there may be good reason to be concerned about the long-term impacts, even if the seafood is safe for most people to eat right now. The biggest issue, the authors write, is with shrimp, oysters, crabs and other invertebrates that have a harder time clearing out polycyclic aromatic hydrocarbons (PAHs), which are carcenogenic chemical compounds found in oil and other fossil fuels, from their systems. “Although vertebrate marine life can clear PAHs from their system, these chemicals accumulate for years in invertebrates,” they write.

There are also longer-term worries for larger fish like tuna, swordfish and mackerel, which over time may accumulate dangerous levels of heavy metals found in crude oil, like cadmium, mercury, and lead, “potentially increasing future health hazards from consumption,” the report concludes. It was authored by Gina Solomon, a senior scientist with the Natural Resources Defense Council and a medical doctor who teaches in the Department of Medicine at University of California-San Francisco, and Sarah Janssen, also an MD and public health expert with NRDC.

Solomon says the standards for evaluating the safety of the seafood are not as thorough or transparent as they could be to assure consumers that the seafood is safe for them to eat. “The government numbers and protocols are probably fine to protect the occasional fish consumer but not not necessarily good enough to protect vulnerable populations,” says Solomon.

Meanwhile, the government maintains that seafood from the Gulf is perfectly safe. Commerce Secretary Gary Locke was in the region yesterday, where he reaffirmed this idea:

“We need to let the American people know that the seafood being harvested from the Gulf is safe to eat,” Locke said during a tour of a Louisiana seafood processing plant. “I think there have been a lot of misperceptions out there. A lot of testing is done before we open state and federal waters to fishing. We’re being very thoughtful, very careful and very deliberate.”

Officials have been green-lighting even more fishing in the Gulf in recent days. On August 10, the National Oceanic and Atmospheric Administration reopened 5,144 square miles of Gulf waters. Now, just 22 percent of the Gulf is closed for fishing, down from 37 percent in early June. This was just in time for the opening of fall shrimp season yesterday. But as the Times-Picayune reports, many shrimpers in the region remain cautious. Even if the catch is as safe as the government says it is, the public remains (perhaps justifiably) concerned about eating the seafood.

Solomon also points out that in determining what’s safe, government agencies should look at how exposure to the toxic chemicals in oil affects vulnerable populations—pregnant women, children, the sick or elderly—and not just the impacts on generally healthy adults. As it stands, the Food and Drug Administration’s evaluation of safe levels for contamination in shrimp is based on what’s safe for a healthy, 176-pound person, with the expectation that this person is only eating one dish of four shrimp per week. What about people who eat far more than that? And the NOAA standards for evaluating whether a region is safe to reopen for fishing require as few as six fish of a particular species be evaluated from that area—and it’s unclear how big that area can actually be. NOAA has also been criticized for withholding much of the data the agency has gathered on seafood from the region.

Environmental groups and Gulf groups have called on the federal government to improve its testing procedures to ensure food really is safe, sending letters to both the FDA and NOAA Tuesday. NRDC and almost two dozen local groups have asked NOAA and the Food and Drug Administration to put in place more “comprehensive” monitoring to ensure protection of vulnerable populations, and to make all their methodology and data public.

“The issues isn’t so much what’s on people’s dinner plates over the next few days or weeks, but that this problem is going to last for years, and we want to make sure that there is a robust safety system that will be protecting people for months and years to come,” said Solomon. “We just want to see this done right, see it done carefully, and we want to make sure all the science is there and available for public scrutiny before years go by and people go back to consuming Gulf fish without a second thought.”