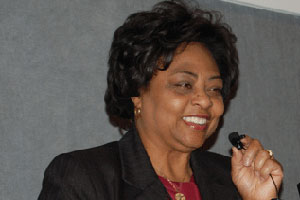 The tempest in a tea pot surrounding the firing of Shirley Sherrod, a United States Department of Agriculture official in Georgia, looks set for a new twist today. If you caught so much as a glimpse of the news yesterday, you heard about Sherrod’s story: how she was forced to quit by USDA officials, including secretary Tom Vilsack and under-secretary Cheryl Cook, after a video surfaced purportedly showing Sherrod, who is black, talking about how 24 years ago she “withheld help from a white farmer seeking the [USDA’s] help in saving his farm.” The video showing Sherrod’s “racism” went viral, even though, as it turned out, the video had been selectively edited, had taken Sherrod’s comments completely out of context, and had flipped Sherrod’s remarks on their head. When interviewed by CNN, the white farmers whom Sherrod had supposedly wronged and discriminated against said the opposite: that Sherrod, their “close friend,” had helped save their farm.

Now that the truth has trickled out in this mini-controversy, the USDA is reviewing the rash decision to fire Sherrod. And they should, given the dubious source of the edited video—namely, Andrew Breitbart’s conservative Big Journalism website. Our own David Corn probably hits it on the nail:

In other words, the truth doesn’t matter. If right-wing demagogues make a stink, we’ll crucify the victim. This was a shameful statement.

Let’s go back to Cook’s remark to Sherrod about Glenn Beck, and flip the script. If a left-wing website had set up a Bush administration official during the Bush-Cheney years, can you see an overheated department functionary saying, “We have to get this person out before it’s on Maddow”? (Rachel, excuse the comparison.) Of course not. The Bush-Cheney folks would have battled back. You don’t allow ideological enemies — who want you to fail — to define the terms. That Beck figured into Vilsack’s and Cook’s calculations for a nanosecond is a tremendous defeat for the administration — and an undeserved victory for Beck and his Tea Party followers. It ought to make supporters of the Obama administration sick. The White House, as could be expected, ran from this mess. On Tuesday, a White House official told CNN that it was not involved in forcing Sherrod out.

The NAACP, which at first supported the decision to bounce Sherrod, reversed course on Tuesday, saying, “We have come to the conclusion we were snookered by Fox News and Tea Party activist Andrew Breitbart,” who runs BigGovernment.com. Snookering can be undone — and it should not be tolerated. The only decent course for Vilsack was to review the case and, if there are no new incriminating facts, offer Sherrod an apology and her job back. If the administration — in the face of a relentless attack from the right — doesn’t fight for its own, how can voters count on it to fight for them? This is not about Beck-bashing. It’s about taking charge and doing the right thing. All that is necessary for the triumph of blogging demagogues is that good people do nothing. Didn’t a conservative once say that?