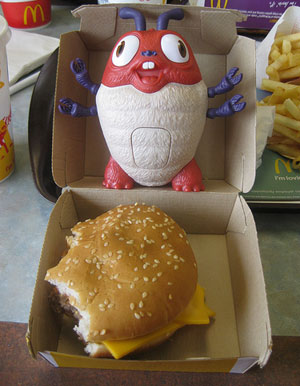 McDonald’s Happy Meals toys are in the news again, but not for their cadmium-laced veneers or potentially choke-inducing tiny parts (see a Mother Jones slideshow of recalled toys for more in that vein). No, this week the entire concept of Happy Meals sits in the hot seat. “McDonald’s is the stranger in the playground handing out candy to children,” says Center for Science in the Public Interest litigation director Stephen Gardner. The watchdog group has given McDonald’s 30 days to pull toys from the menu—or face a lawsuit for illegal and deceptive food marketing.

But are the millions of burger dollars pumped into kid marketing really why—as Corporate Accountability International put it—”one in three children born today will become diabetic during their lifetime as a result of a McDonald’s-style diet?” Argues Slate writer Rachael Larimore:

If you’re going to punish McDonald’s for catering to kids, are you also going to restrict how much programming the networks can air targeted to children? Are you going to tell Nintendo that they can release only so many games rated “E for everyone”?…it’s not fair to blame one company or one industry for a disease that has a multitude of causes. That just lets the parents off the hook.

The concern over the seductive qualities of Happy Meals could mean the end to a childhood tradition of getting a fun surprise along with those chicken McNuggets. But at the rate the meals are now being consumed worldwide, maybe it’s a tradition that has gotten a little out of hand.