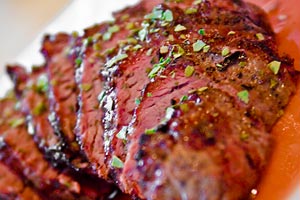 Whether you’re a burger lover or a strict vegetarian (I’m somewhere in the middle—more on this in the July/August 2010 issue of Mother Jones), you’ve probably heard that too much meat is definitely not a good thing. Most recently, researchers have linked overconsumption of red meat with early puberty in girls: A University of Brighton study found this month that about half of UK girls who ate 12 or more servings of meat each week at age seven had started their periods by age twelve and a half, compared to about a third of those who ate fewer than four servings. Worrisome, since some research suggests that girls who go through puberty early are at greater risk for breast cancer.

Meat-heavy diets aren’t great for adults, either: In 2009, a landmark National Cancer Institute study of 500,000 Americans between the ages of 50 and 71 found that people who eat a quarter-pound of red meat or processed meat every day were 30 percent more likely to die in the 10 years of the study than those who ate 5 ounces of red meat or less per week. Compare that to research about vegetarian Seventh-Day Adventists, many of whom live significantly longer than the average American.

So, how much meat is too much? Americans eat about eight ounces of meat every day, more than twice the rest of the world’s average. Most health experts agree that’s too much (and in addition to being unhealthy, mass production and consuming this much meat has major environmental consequences). You can find current USDA guidelines for meat consumption here (generally five to seven ounces of meat or beans a day for adults, less for kids depending on age and size), but some some people think those recommendations are suspiciously high: Marion Nestle writes about agriculture lobby groups’ influence over the USDA dietary recommendations in her book Food Politics: How the Food Industry Influences Nutrition and Health.

But you don’t have to swear off summer barbecues, either. As a rule of thumb, nutritionist Dawn Jackson Blatner, proponent of the light-on-meat flexitarian diet, recommends thinking of meat as “condiment instead of a large-meal focal point.” Aspiring flexitarians, she says, should aim for two meatless days per week.

In addition to limiting overall meat consumption, Imogen Rogers, a lead author on the UK study, notes that the World Cancer Research Fund recommends avoiding processed meat (such as ham and bacon), which has been linked to increased cancer risks. “Processed meat is also very high in salt, and at least in the UK the vast majority of children consume well in excess of the recommended maximum salt intakes,” says Rogers. The National Cancer Institute also warns against eating meat cooked at high temperatures. “The way people cook red meat is usually by grilling, barbequing or frying,” says Jie Lin, an epidemiologist at the University of Texas. “No matter what types of meat—red meat or white—if cooked under high temperature, generate HCAs that could lead to cancer.”

Interested in cutting back on meat? Check out the Meatless Monday campaign, an initiative by the Johns Hopkins Bloomberg School of Public Health aimed at reducing Americans’ meat consumption by 15 percent.