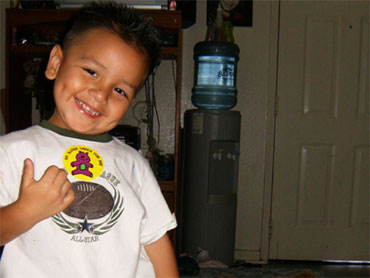 Things have gone from bad to worse in the beleagered town of Mendota in California’s Central Valley. Nicknamed the Canteloupe Capital of the World, it was once at the heart of the region’s booming agricultural economy.

Mendota (which also happens to be the setting for much of Josh Harkinson’s piece about California’s ongoing water crisis) was thrust into the limelight in March of this year, when unemployment there peaked at 41 percent. A bitter feud over water rights pitted growers and farm workers—onetime enemies—against environmentalists and the federal government. Meanwhile, an area the size of the City of Los Angeles went fallow.

Today, unemployment is still at 36 percent. In August alone, the community food bank distributed more than 2.5 million pounds of food to increasingly desperate workers, and the numbers keep getting worse. “It’s a tremendous volume,” said foodbank head Dana Wilkies. “Almost all these folks are impacted by the agricultural sector. They’re farm workers, they’re truckers or packers or people who run small businesses in those communities who were reliant on their customer base.”

Even Governor Schwarzenegger’s long awaited water bills, signed into law this week,  won’t change anything for the 2010 season. And without torrential rain and heavy snowfalls in the Sierra, there’s little hope on the horizon.

Then, two weeks ago, the tiny town of 9,000 and shrinking was rocked by the brutal slaying of four-year-old Alex Mercado, whose body was found stuffed into a clothes-dryer in the home of a 14-year-old neighbor thought to have sodomized him and drowned him in a bathtub.  He confessed and will be tried as an adult for the crime, which could carry up to a 47-year sentence.

“I just screamed at what I saw,” said Elsa Castro, the suspect’s mother. “No one will ever understand how I feel about what happened.”

Yet another nightmare in the Cantaloupe Center of the World.