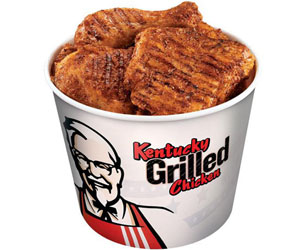 KFC’s saucy new grilled chicken is made with a marinade of “secret herbs and spices,” one of which is “beef powder.” Hmm, is beef powder an herb, or a spice? This revelation apparently has people up in arms, and the chicken chain El Pollo Loco has even made commercials about what they are calling false advertising. KFC’s response? “Small amounts of beef flavors are commonly used in seasonings for many food products, for both restaurant and retail use.”

Remember in 2002 when McDonald’s settled a lawsuit (for $10 mil) brought by Hindus and vegetarians for the beef fat in their fries (after they promised they only used vegetable oil)? That companies beef up their products is not surprising: Beef makes things tastes good!

When I read the ingredients in KFC’s “better-for-you option for health-conscious customers” grilled chicken I actually get stuck on the MSG (twice, in the marinade and in the seasoning) and the partially hydrogenated oil. Sure, other fast foods are just as bad if not worse. But there are all sorts of things in foods that aren’t advertised well for consumers. For example, both Wendy’s and Burger King, list “spices” as an ingredient in their chicken sandwiches. Which isn’t all that descriptive, maybe they’re slipping us the beef as well.