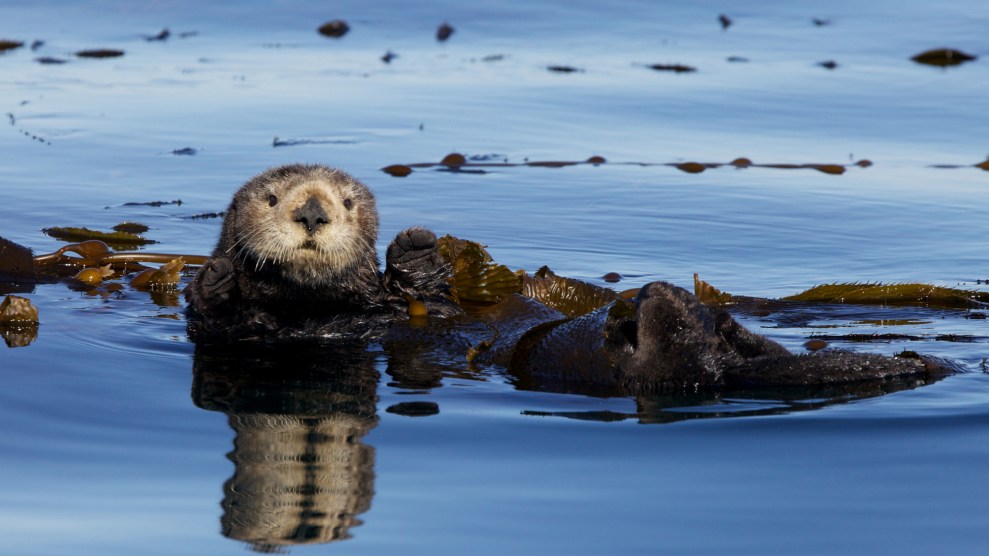 In 1906, two hunters at Otter Rock on the central Oregon coast killed what may have been Oregon’s last wild sea otter, then sold the pelt for $900. The fur trade decimated sea otter populations from Baja California to Alaska; by 1911, when the U.S., Great Britain, Russia and Japan signed the North Pacific Fur Seal Treaty, banning off-shore hunting, the species was nearly extinct.

Since then, wildlife managers up and down the coast have tried, with mixed success, to bring them back. In Southeast Alaska, reintroduction in the 1960s succeeded so well that many now consider otters a pest. Similar attempts around the same time in Oregon didn’t take, but several populations in Washington and Central California are still slowly growing.

Now, the U.S. Fish and Wildlife Service has turned its attention to that remaining 900-mile gap. The agency announced in an assessment published last month that returning sea otters to Oregon and Northern California is feasible and would also bring likely—if unequal—economic benefits. Scientists and tribal leaders say reintroducing otters would restore balance to degraded kelp forests, boost fish species, protect shorelines, generate tourist dollars and even capture carbon. But concerns remain in communities where otters would compete with humans for shellfish, and among some tribes that fear their self-governance is also at stake.

Sea otters, which hunt shellfish, crab and kelp-devouring sea urchins, are at the top of the kelp-forest food chain. Without otters, those ecosystems have been slowly degrading, and in 2013 they hit a catastrophic tipping point: A mysterious disease—possibly triggered by warming ocean temperatures—caused a continent-spanning die-off of sea stars, which had filled otters’ role as the top predator of sea urchins. Unchecked, urchins proliferated, causing the widespread collapse of kelp forests: In Northern California, they’ve shrunk by more than 90%, replaced by urchin-filled barrens. Researchers believe reintroducing sea otters may be one of the only ways to save what’s left.

The feasibility assessment is the latest step in a reintroduction effort championed by Oregon’s Elakha Alliance, an otter conservation nonprofit founded by tribal members and scientists. Peter Hatch, a member of the Confederated Tribes of Siletz Indians and an Elakha Alliance board member, said their significance to ecosystems and tribes drives the organization’s work. Though generations have passed since otters were hunted to near extinction, many places still bear their name in tribal languages. Stories about them depict a relationship that epitomizes the interconnections between humans and the rest of the natural world.

“Bringing sea otters back to our ancestral lands is a different kind of homecoming.”

Hatch believes this dictates a responsibility for humans to try to bring otters back. Among coastal tribes, including his own, Hatch said there are many stories of men and women marrying sea otters, seals and beavers. These animals bring gifts from the ocean and offer a relationship of mutuality that Hatch takes to heart. “Quite literally, in a traditional understanding, these species are relatives by marriage. So we have a familial duty to support them, to uphold their interests, to be stewards. In ways that are hard to fully articulate, it puts a different spin on our environmental responsibilities.”

But bringing back sea otters will not be a universal boon. “The greatest risk is the amount of uncertainty we have about what the impacts would be on shellfish fisheries,” said Michele Zwartjes, a co-author of the assessment and a biologist and field supervisor for the U.S. Fish and Wildlife Service in Oregon. Otters will likely compete with people for clams, urchins, abalone and crab, and the fishing industry could be affected. Past reintroductions have shown that large impacts are possible, but not guaranteed.

Those who fear economic losses often point to Southeast Alaska, where 419 otters were introduced in 1969. The population, which now numbers 50,000, has significantly reduced the commercial crab catch and cost fishermen more than $28 million over 15 years, according to an industry-funded report.

This is unlikely to happen in Oregon, Zwartjes said, due to the same geographic and habitat barriers that have so far prevented such a population explosion in California: Alaska has five times the suitable habitat of the Oregon and California coast and its shape allows for spread in many directions—on the continental West Coast, otters can only move north or south. But the report acknowledges that in the Lower 48, the Marine Mammal Protection Act would prevent killing sea otters if numbers got out of hand.

That appears to be the largest concern among tribes. Several of the six tribes that responded to Fish and Wildlife’s request for feedback expressed misgivings, including the Makah Tribal Council in northern Washington. No new reintroductions are proposed for that region, but tribal leaders believe otters could migrate there—some from past projects in Washington already have.

“Our concern is that any plan to reintroduce sea otters back to the ecosystem would not be complete if it did not also include returning (sea otters’) primary predator of man back to the ecosystem,” Chairman Timothy Green Sr. wrote. He pointed to evidence that tribes historically managed sea otters in ways that also enabled thriving fisheries of abalone, urchin and mussels. Without that balance, otters could threaten the tribes’ food and economic security. Under federal law, however, coastal tribes would be unable manage them through hunting, despite having the traditional knowledge to do so.

Still, most tribes, including the Makah Tribal Council, acknowledged the ecological benefits of reintroduction. Elakha Alliance members believe that as plans unfold over the next few years, conversation among stakeholders will reveal more shared goals than disagreements. Any reintroductions are still four or five years away.

One site likely to be considered is near Port Orford in southern Oregon, where one of the few remaining large kelp forests offers ideal habitat. The area is a stop on the Run to the Rogue, an annual 234-mile relay that retraces the Siletz Tribes’ forced relocation. When Oregon and the federal government removed families from the area more than 150 years ago, Peter Hatch said, sea otters were still present. Today, the relay is an important act of remembrance, community and homecoming.

“Bringing sea otters back to our ancestral lands is a different kind of homecoming,” Hatch said. “I look forward to the day when we’ll be celebrating in Port Orford and be able to see the sea otters out in the water, as the folks from there always had been able to.”