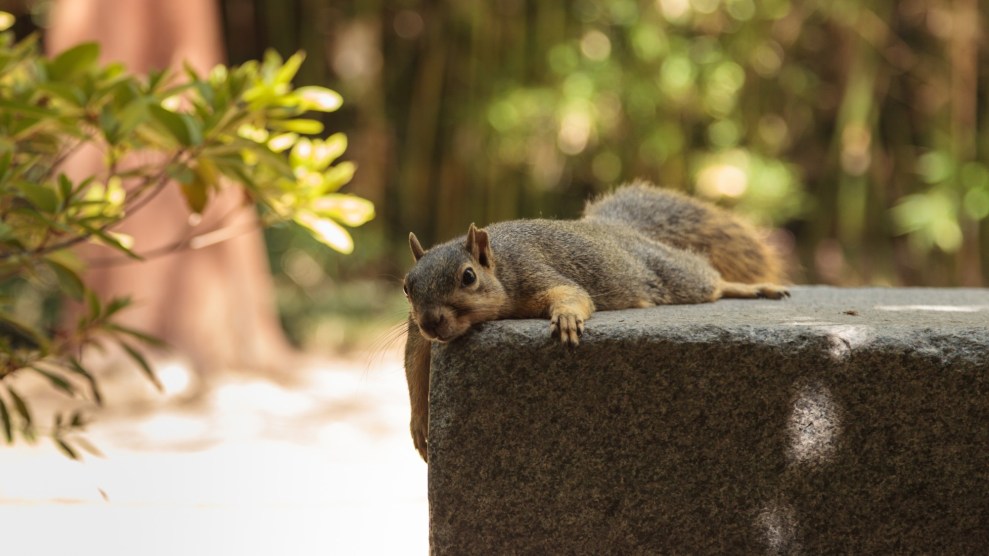 This story was originally published by Guardian and is reproduced here as part of the Climate Desk collaboration.

It’s baking hot in New York, which can only mean one thing for the city’s small mammal population: It’s splooting season.

This past week, with temperatures reaching 95F, the city’s parks department urged residents not to worry about the health of squirrels seen sprawling on the ground, legs extended behind them like a person whose arms gave out halfway through a yoga class. “On hot days, squirrels keep cool by splooting (stretching out) on cool surfaces to reduce body heat,” the department tweeted.

If you see a squirrel lying down like this, don't worry; it's just fine. On hot days, squirrels keep cool by splooting (stretching out) on cool surfaces to reduce body heat. It is sometimes referred to as heat dumping. pic.twitter.com/pD1T3lPbBH

Perhaps even more remarkable than the phenomenon itself was the word the government agency used. Splooting? Is that a real thing?

The science certainly is. Squirrels’ bellies have less fur than other parts of their bodies, so splooting helps them cool down, says Dan Blumstein, a professor in the department of ecology and evolutionary biology at UCLA. It’s a popular trick among mammals, including the marmots he studies, which “on hot days will lie on rocks as it gets hot, because the boulders are still cooler,” he says.

But until recently, he says, he didn’t know the term “splooting.” “I always called it ‘doing the rug’,” he says.

Grant Barrett, a lexicographer and co-host of the radio show A Way With Words, explains that the term comes from Doggo language, a form of canine-inspired internet-speak that has grown into its own tongue. Typically appearing on social media with pictures of dogs, the language features an array of cutesy words including “bork” (a version of “bark”), “mlem” (a kind of tongue movement) and “pupperino” (self-explanatory).

Like squirrels and marmots, dogs sploot. Corgis, stubby legs sticking out behind them, are particularly adept at it and may deserve credit for inspiring the term—though pinpointing its exact origin may be an exercise in futility, Barrett says. “It would take you days or even a week to slog through all of the posts and comments in these [doggo-focused] groups to figure out who first said it.”

Also deserving of credit, according to Barrett: Australians. Doggo reflects “an Australian way of creating those kinds of cutesy words, and ‘doggo’ itself just seems so much like an Australian word. You can’t prove it, because this kind of stuff is loosey goosey,” Barrett says. But “if you look at the Facebook groups for this kind of language, some of the earliest ones do seem to have a lot of Australians in them.”

It might be a variation on “splat,” Stamper wrote, “and that would actually fit its pre-corgi history nicely.”

The earliest use of the term he could find was around 2011, which aligns with the findings of Kory Stamper, lexicographer and author of Word by Word: The Secret Life of Dictionaries. The word “didn’t have much use in printed, edited prose, however, and maintained a pretty low profile—it stayed splooted, if you will—until very recently,” she wrote in an email to the Guardian. “It seems like newspapers and magazines discovered the sploot in about 2020.”

It might be a variation on “splat,” Stamper wrote, “and that would actually fit its pre-corgi history nicely.” Sploot “has been used in cartoons as one of those onomatopoeic sound descriptions since at least the 1950s; it seemed to be a favorite of the folks behind the Bugs Bunny comic”. It also calls to mind the word “splay”, as a caller to Barrett’s show noted.

Whatever the origin, the word confers a certain respect on the animals we apply it to, Barrett says. “I think that this whole batch of language really also comes from not just your natural tendency to talk to animals in a cute way, like you would a baby, but in your natural tendency to welcome them as a thinking being,” he explains. “By naming this action that is so common among animals, you’re giving them agency.”

So are these mammals on to something? No squirrel was willing to comment on the record, so a Guardian reporter ran around the block in 90F heat, then splooted on his apartment floor. While it may have been marginally cooler than remaining standing, it wasn’t particularly comfortable. Nor was it satisfying enough to justify such socially questionable behavior, even with a shirt partially lifted to simulate the thinner belly fur Blumstein described.

But humans have our own ways of dealing with heat—such as the shower required after floor-splooting—as do other animals we might see in our neighborhoods. Birds, Blumstein notes, sometimes pant like dogs. “They open their mouths and they sort of hunch down a little bit and their tongues are out … they don’t look very happy.”

“Clearly,” he says, “a hotter world is changing the behavior of animals.”