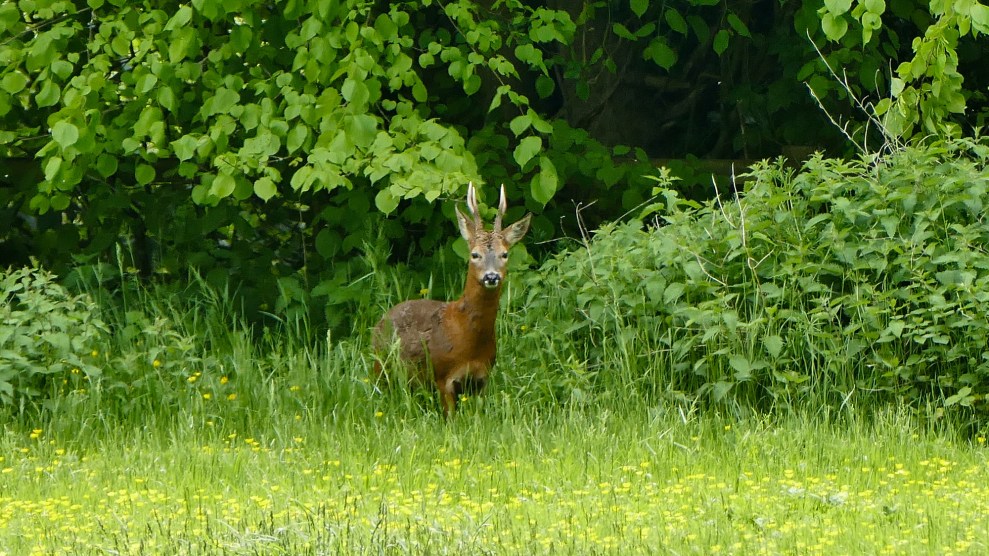 The muntjac, originally from China, is being called "fiadh-comhartaich" (barking deer).© Geoffrey Swaine/Avalon via ZUMA Press

A host of warm weather species moving north into Scotland have been given new Gaelic names, reflecting the subtle but significant environmental shifts brought by climate heating.

Following work by dozens of lexicographers, naturalists and Gaelic artists, the firecrest, one of the UK’s tiniest birds, now luxuriates under the delicate Gaelic words for flaming, wee, little thing, or crìonag lasrach.

The azure damselfly is now cruinneag liath, or grey, neat young girl, while the common rosefinch has become little red creature of the briar or deargan drise. The bearded tit, a bird mostly resident in southern and eastern England, is now the moustached reed-worker or cuilcear staiseach.

The project, devised by the wildlife artist Derek Robertson and endorsed by Scotland’s Gaelic language and nature conservation agencies, has identified 40 species that are recent arrivals in Scotland that lack formal Gaelic names.

The full inventory, which is being finalized, is due to be published in June in a new book edited by Robertson, featuring his watercolors of each species and a short three-line poem in Gaelic on each by the Skye-based Irish poet Rody Gorman. Later this year, an exhibition will take the paintings and translations to the Western Isles, Fife and the Scottish Poetry Library in Edinburgh.

Robertson said the project was designed to update the Gaelic lexicon in a way that embraced the language’s intimate, historic connections to the landscape and Scotland’s natural heritage. “Gaelic has a rich tradition of naming things which is really beautiful,” he said.

“Gaelic has a very strong connection with the natural world and that is reflected in its naming of things.”

Gaelic, like many languages, will adopt words from other languages. Gaels will also devise informal translations. A consensus emerged that for these species, which are now settled or encroaching in Scotland, a more formal process of naming was needed.

“Languages borrow words all the time and that is a process for any living language,” he said. “But Gaelic has a very strong connection with the natural world and that is reflected in its naming of things.”

Some are exotic species brought to Britain by the Victorians and Edwardians. Those include the muntjac, a diminutive deer originally native to China which escaped from country house parks in the home counties. In Gaelic, it is now fiadh-comhartaich or barking deer.

Even the red-necked wallaby, the Australian marsupial that colonized the island of Inchconnachan on Loch Lomond after it was imported by a former owner, has been captured by the project. Its name translates as uallabaidh ruadh-mhuinealach.

The project, endorsed by Bòrd na Gàidhlig, the Gaelic language agency, and NatureScot, the government conservation agency, could also help build interest in the language amongst non-native or lapsed speakers, said Mark McConville, a linguist at Glasgow university who specialises in Gaelic lexicography.

Recent reports have warned that Gaelic is in danger of dying out as a living language, with the number of native speakers rapidly dwindling, and its catchment shrinking to the Hebrides and far west of Scotland. Those areas are also suffering the negative impacts of climate heating: sea level rise threatens coastlines, intensifying storms and harming sensitive native species.

“Music is one route into learning Gaelic and nature is definitely one of those too,” he said. “Any language starts from a place and comes from a place, and the way words are formed is intimately connected with that place. We definitely see this with Gaelic.”

A few of the Gaelic species names proposed

This north American sea duck sometimes appears during winter on Orkney, Shetland or Fair Isle in the far north of Scotland; its bill is adapted to eat mussels and other bivalves.

Firecrest becomes: crìonag lasrach (flaming, wee little thing)
It vies with its cousin the goldcrest for the title as the UK’s tiniest bird; males have bright orange and yellow streaks on their heads. It very occasionally appears in Scotland.

Azure damselfly becomes: cruinneag liath (gray, neat young girl)
This pale blue damselfly is common in central Scotland, seen from May to September, and is spreading northwards as the climate heats.

Common rosefinch becomes: deargan drise (little red creature of the briar)
A rare visitor to the UK’s eastern coastline, this sparrow-sized bird has a streaked breast and forked tails; males have scarlet heads, breasts and rumps.

Parrot crossbill becomes: cam-ghob làidir (strong/stout bent-bill)
A large, powerful finch, similar to the Scottish crossbill, a few breed in the Cairngorms of Scotland; the male is orange to red in color, and the female olive green or grey.