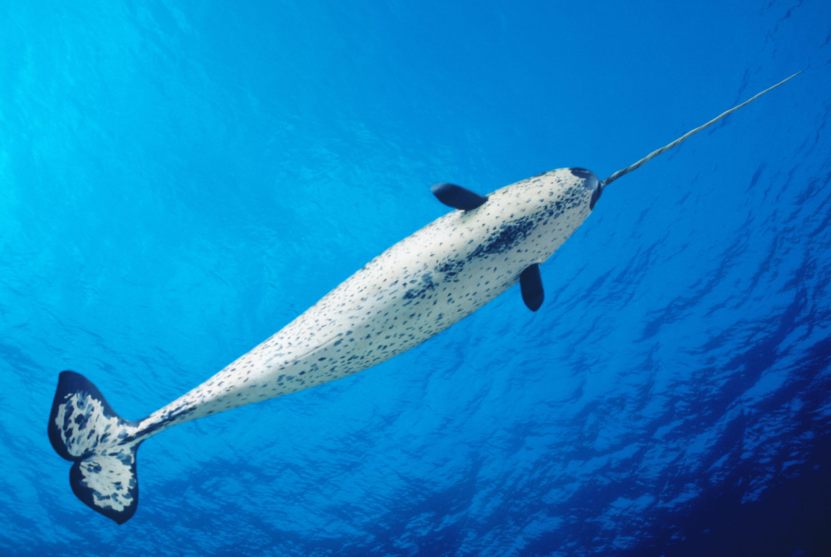 A Male Narwhal swims in the ocean. April 12, 1999.Dave Fleetham/Zuma

Researchers have long  debated what the 10-foot-long tooth that erupts from a narwhal’s head is actually for. Perhaps it has something to do with sexual selection, and males with longer horns attract more females. Or maybe the things sense salinity. Or perhaps a narwhal uses its tusk to flush out prey on the ocean bottom.

Whatever the purpose, scientists know this for certain: The Arctic region, which the narwhals call home, is warming twice as fast as the rest of the planet, and by analyzing these tusks, researchers can glean surprisingly detailed insights into how the animals are dealing with catastrophic change. It’s not looking good.

“You can in one year of work get narwhal tusks and go back 50 years in time.”

Writing in March in the journal Current Biology, scientists described what they found in 10 tusks collected from animals in northwest Greenland. Because a tusk grows continuously over the many decades of a narwhal’s life, the researchers could read the outsized teeth like the rings of a tree. They found that between 1962 and 2000, the mercury in the tusks increased by an average of 0.3 percent a year, but between 2000 and 2010 it increased by 1.9 percent per year. This is consistent with increased mercury discovered in the bodies of other top predators in several regions across the Arctic, possibly due to air pollution blowing in from the south.

The scientists are also finding evidence in the tusks that the narwhals’ diet is changing, from consuming species associated with sea ice to eating more open-ocean species. This corresponds to a dramatic decline in Arctic sea ice since the year 1990.

“Instead of doing 40 years of work to get 40 years of data, you can in one year of work get narwhal tusks and go back 50 years in time,” says McGill University wildlife toxicologist Jean-Pierre Desforges, one of the lead authors on the paper. “So that’s the really remarkable thing.”

Mercury is a potent neurotoxin that bioaccumulates in species as they ingest it over a lifetime. When an organism at the bottom of the food chain consumes mercury, it collects in its tissues. Then something bigger eats that animal and its mercury, and so on up the food chain.

Some top predators, like the polar bear, bioaccumulate a lot of mercury but can also expel it—the bears sequester it in their thick fur. No such luck for the smooth-skinned narwhal. “For an animal that lives a long time—these whales can live over 50 years—they’re accumulating mercury year after year,” says Desforges. “That’s why they get to really high levels, and that’s of course why we’re concerned. If these levels get high enough, they could have a negative effect for the species.” That might include reproductive or cognitive effects, since mercury is a neurotoxin.

The other troubling signal the researchers found in the tusks hinted at the whales’ changing food sources. They looked for stable isotopes of carbon and nitrogen, residues of narwhals’ diet that linger in their tusks. Carbon reveals information about the prey’s habitat—for instance, if it lived in the open ocean or closer to land. Nitrogen tells you its trophic level, or where in the food chain it was. “Together, they give you an idea of the overall foraging ecology of the species,” says Desforges.

As with mercury, Desforges could map how this diet changed over time. Prior to 1990, the whales had been feeding on “sympagic” prey associated with icy habitat—Arctic cod and halibut. Then their diet began to shift toward more “pelagic,” or open-ocean, prey like capelin, a member of the smelt family. “We’re not looking at actual stomach contents of prey or anything,” says Desforges. “But we are essentially arguing that this temporal pattern matches extremely well with what we know about sea ice extent in the Arctic, which after 1990 starts dropping pretty dramatically.”

“If they’re shifting prey to less Arctic species, that could be having an effect on their energy level.”

A couple of things could be going on. As the sea ice retreats in the Arctic, the ecosystems below it may be reshuffling, leading to population declines among Arctic cod and halibut. In that case, the narwhals would have to turn to hunting open-ocean species to make up their dietary deficit. On the other hand, those populations of cod and halibut may not necessarily be declining, but simply shifting north. Or it could be that as Arctic waters warm, more capelin are around, and the narwhals aren’t about to pass up an abundant meal.

But if a fish is a fish, why would it matter what the narwhals are eating, so long as they’re getting enough food? It turns out that not all fish are created equal. “Arctic species are more nutritious, energy-wise,” says Desforges. To survive the cold, fish need to pack on fat, which means more calories for the predators that feed on them, like narwhals. “If they’re shifting prey to less Arctic species, that could be having an effect on their energy level intakes,” Desforges adds. “Whether that is true is yet to be seen, but it’s certainly the big question that we need to start asking themselves.”

This dietary reshuffling—which may or may not be a problem for the narwhal—could collide with rising mercury levels, which are a problem for any animal. These two threats could turn out to be more problematic combined than they are alone. “That’s the tricky part,” says Desforges. “We essentially have data that suggests that things are changing, but we really don’t have an idea of how that’s impacting the whales here.”

The power of this tusk-analysis technique is that it can theoretically allow scientists to look even further back in time than the 1960s. Taking a tissue sample from a living narwhal only gives you data on how the individual is faring at that moment. But natural history museums all over the world have narwhal tusks in their collections going back over 100 years.

“Museum collections offer a great opportunity to look at these changes over even deeper time,” says Moe Flannery, senior collections manager of birds and mammals at the California Academy of Sciences, who wasn’t involved in this work. “Museum specimens hold this hidden information that is not easily accessible, but is accessible to researchers who study changes over time.”

Looking forward in time, though, it’s hard to say what a rapidly changing Arctic will have in store for the narwhal, and what signals of climate change we might find in its tusks in the future.