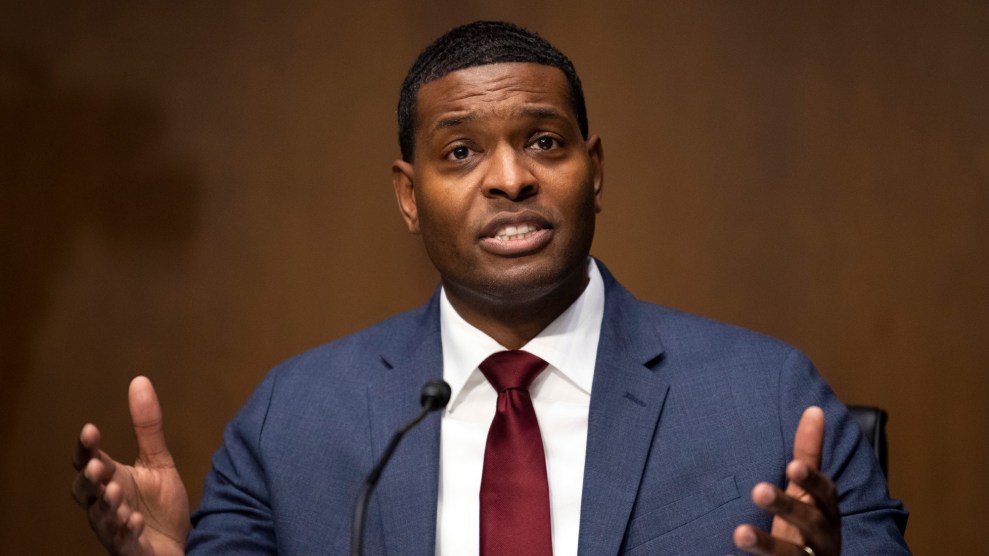 Michael Regan speaks during his confirmation hearing before the Senate.Caroline Brehman/AP

Michael Regan has perhaps the most fiendishly challenging job within Joe Biden’s administration. As the head of the Environmental Protection Agency, Regan not only has to grapple with the unfolding cataclysm of the climate crisis, he must do so at the helm of a traumatized, shrunken institution still reeling from the chaos of the Donald Trump era.

“I was deeply concerned as I watched the previous administration,” Regan told the Guardian. “We all witnessed a mass exodus of scientists and qualified people the agency needs. I was really concerned coming into the job as to how morale would be and how much of a setback it would be to tackle the challenges before us.”

Trump vowed to reduce the EPA to “little bits,” and although his plans to wildly slash the agency’s budget were largely rejected by Congress, the environmental regulator is now left with its fewest employees since the mid-1980s, during which time the US population has grown by nearly a third.

Scientists were routinely sidelined, with an average of three a week fleeing the agency during Trump’s term. “It was a sort of painful hell,” said one career official, who weighed up leaving but decided to stay.

There were plenty of sources for angst. Trump’s EPA laid siege to dozens of environmental regulations—from limits on pollution from cars and trucks to rules designed to stop coal plants dumping toxins into rivers to a ban on a pesticide linked with brain damage in children—often contrary to scientific advice and sometimes shortly after meetings with industry lobbyists. Mentions of climate change were not only scrubbed from the EPA website, the Trump administration mulled holding a televised debate as to whether it existed at all.

Scientific panels were purged of various experts and replaced with industry representatives who appeared to hold sway. Andrew Wheeler, Regan’s predecessor, is a former coal lobbyist who said acting on climate change was merely “virtue signaling to foreign capitals.” Scott Pruitt, Trump’s first EPA chief, was embroiled in an extravaganza of scandals, including living in an apartment paid for by a lobbyist, using his position to get his wife a job at Chick-fil-A, spending agency funds on foreign trips and even deploying staff to obtain a cut-price mattress from Trump’s Washington hotel.

Regan, the first black man to lead the EPA in its half-century of existence, previously worked at the agency during Bill Clinton and George W Bush’s administrations. “I worked here for a decade and I knew the staff were not being utilized properly,” he said. “I know the people, I know the quality of work they can do.”

Regan has made a good first impression—colleagues say the 44-year-old is affable and charismatic. Mentions of the climate crisis are no longer verboten at the EPA, experts are ushered into decision making and intertwined issues such as the anti-racism protests that swept the US last year are no longer glossed over. Regan is a “smart, savvy guy who knows the issues,” said Peggy Shepard, a longtime environmental justice campaigner and now White House adviser.

Even Shelley Moore Capito, a Republican senator who voted against his confirmation because she opposes Biden’s climate agenda, said she “really liked getting to know Michael Regan.” The new administrator is a “dedicated public servant and an honest man,” Capito acknowledged.

Regan had respiratory challenges as a kid: “I’ve been keenly aware of the impact of pollution from an early age.”

Regan peppers his statements with promises to listen and engage with “stakeholders”, including industry. “The worst thing we can do is be paternalistic in our first actions,” he added. But he also knows the sting of pollution’s unjust burden—growing up in eastern North Carolina, Regan suffered from the proximity of highways, hog farms and other polluting industry. He needed an inhaler in childhood, part of a broader American experience where black children are five times more likely to be hospitalized with asthma than white children. Communities of color in general are also far more likely to live directly alongside sources of pollution.

“During days of high ozone and high pollution I did suffer respiratory challenges,” he said. “I’ve been keenly aware of the impact of pollution from an early age and what that means, from lost school days or from preventing me enjoying the outdoors with my grandfather and father. That’s always been part of my knowledge base.”

Later in life, Regan was to be the top environmental regulator in his home state, garnering praise for his work to clean up piles of toxic coal ash but also sometimes vexing environmentalists who wanted a more full-throated champion.

Emily Zucchino, a campaigner at Dogwood Alliance, a North Carolina group that opposes chopping down forests for biomass energy, said Regan had a “mixed record” in the state, on the one hand creating a new environmental justice board but also handing out permits for new wood pellet operations. “Had Regan’s actions matched his words, we would have had an outcome more favorable to the communities and forests of North Carolina,” she said.

It remains to be seen whether Regan’s collegial approach will enable the EPA to pick its way through a tangle of challenges amid opposition from Republicans who have assailed Biden’s climate ambitions as a job killer. A key factor within this crucible is time—not only does the climate crisis remorselessly worsen by the day but a tranche of new EPA rules to reduce planet-heating emissions, not to mention clean air and water edicts, will take several years, probably via numerous legal battles, to materialize.

It’s a pressure that Regan appreciates. “We definitely feel the responsibility. We aren’t going to shrink away from our obligations,” he said. “We are going to apply our statutory authority to solve as much of this problem [climate change] as we can as an agency. Yes, we have to revisit bad decisions, but the goal isn’t to get back to neutral: we have to make up for lost time. We are leaning in.”

New directives around scientific integrity and environmental justice have already been rolled out, while strengthened standards for vehicle pollution and methane leaks from oil and gas drilling are expected in summer.

Regan said he feels he also has a “clean slate” to write a new pollution rule that would curb emissions from coal-fired power plants, after the courts struck down a Trump EPA attempt to weaken a previous Obama-era version. All of this, and much more, will be crucial if the US, and the world, is to slow the disastrous heatwaves, flooding, storms and other ravages of the climate crisis.

“He does have a lot on his plate and with a lot of these things we’d want rules finalized by the fall of next year,” said Fred Krupp, president of Environmental Defense Fund who worked with Regan for eight years at the environmental group. “He could well have the hardest job in the administration. It’s an enormous challenge, so it’s good that he’s so talented.