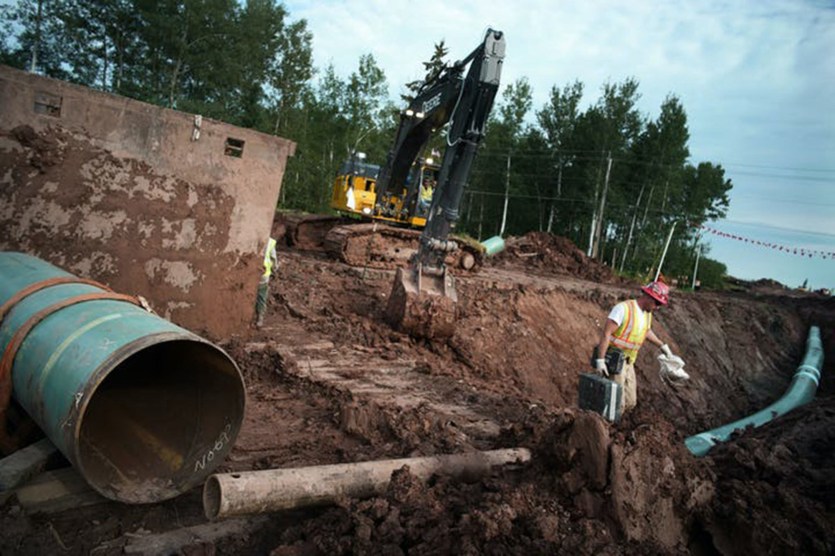 An Enbridge crew works on a stretch of pipeline in June 2019. Richard Tsong-Taatarii/ZUMA

As governor, Gretchen Whitmer vowed to provide clean and affordable drinking water for the Great Lakes state of Michigan. Last year, she implemented a statewide moratorium on water shutoffs to provide relief during the COVID-19 crisis, allocated $500 million dollars for improving water infrastructure, and in November stood by a campaign promise when she ordered Enbridge Energy to shut down its Line 5 pipeline, which carries crude oil and natural gas liquids under the Great Lakes from western Canada to Michigan and on to eastern Canada.

Whitmer’s order gave Enbridge until May 12 to shut down Line 5. But the company has so far refused to comply, leading to a showdown between the biggest mover of oil in the United States, Enbridge, and one of the country’s emerging political leaders on climate, over land in her own state.

Enbridge has failed to meet its obligations, Whitmer said, “and these failures persist and cannot be cured.”

A review by the Michigan Department of Natural Resources last year found that Enbridge has repeatedly violated requirements laid out in the 1953 easement that allowed it to build the pipeline, with infractions varying from not having the required support on the lake bed to inadequate corrosion control. Whitmer said in a press release that Enbridge “failed for decades to meet these obligations under the easement, and these failures persist and cannot be cured.”

Her order to shut down the pipeline follows years of concern from researchers, activists, and policymakers that Line 5 could seriously threaten Great Lakes fisheries and drinking water. The National Wildlife Federation found that the pipeline has spilled over 1 million gallons of oil and natural gas liquids in an estimated 30 spills to date. “Every day that pipeline lays on the lakebed, we’re a day closer to a catastrophe,” said David Holtz, an activist and coordinator for Oil and Water Don’t Mix, a coalition of Michigan organizations fighting to shut down Line 5 and support a clean energy transition.

There are also climate change concerns. To keep Line 5 operating, Enbridge has announced plans to build a protective tunnel over the part of the pipeline that crosses under the Great Lakes at the Straits of Mackinac, where Lake Huron and Lake Michigan meet. One of several permits for the tunnel construction was granted in late January this year. If it is completed, Enbridge would be allowed to use the pipeline for the next 99 years. But environmentalists and scientists argue that a long-term infrastructure plan to keep distributing and using fossil fuels runs counter to Whitmer’s 2050 carbon-neutrality goal and could derail U.S. climate change targets more broadly. Each day, the pipeline transports up to 540,000 barrels of fossil fuel.

Line 5 is facing opposition from another front as well: The Little Traverse Bay Bands of Odawa Indians is applying to have the Straits of Mackinac federally designated as a “Traditional Cultural Property” after it found what looks like artifacts of a 10,000-year-old caribou-hunting culture. This designation would require the U.S. Army Corps of Engineers and the Public Service Commission to consider the cultural significance of the land before approving Enbridge’s final permits for the protective tunnel.

“[Activists] have really come a long way” in their fight against Line 5, Holtz said. “We’ve put together the biggest, broadest, toughest citizens’ campaign Michigan has ever seen when it comes to an environmental issue.”

One US stretch of the Line 5 pipeline is the worst possible location in the Great Lakes for an oil spill.

Since Whitmer’s closure order in November, Enbridge has sued the state of Michigan on the grounds that it doesn’t have authority over the company because Enbridge is regulated federally by the Pipeline and Hazardous Materials Safety Administration, or PHMSA. Enbridge has also stated outright that it will defy the governor’s orders. “We do not plan to shut down Line 5 unless ordered by a court or PHMSA, which we view as highly unlikely,” a spokesperson for the company told Grist. Among its stated reasons for refusing to shut down are concerns over energy security for Michigan and Canada and the increased environmental impact from alternative modes of transporting propane. The pipeline supplies between 55 to 65 percent of Michigan’s propane needs.

Fifteen Republican members of Congress—including Michigan’s Tim Walberg and Jack Bergman, and Wisconsin’s Glenn Grothman—sent President Biden a letter in March asking for support to keep the pipeline operating. A member of Prime Minister Justin Trudeau’s cabinet, Minister of Natural Resources Seamus O’Regan, said that keeping Line 5 operational is “non-negotiable.” And Ohio and Louisiana also asked to intervene in favor of keeping Line 5. Ohio receives oil from the pipeline, but it’s unclear what Louisiana’s stake is.

In most cases, property disputes like this are straightforward, explains Nick Shroeck, director of the Environmental Law Clinic at the University of Detroit Mercy. But the standoff between Whitmer and Enbridge is unique because it’s multi-jurisdictional, he says, and because of the massive amount of oil the pipeline carries and any potential disasters.

For the shutdown to go into effect, a state or federal court would need to rule in Whitmer’s favor. If the case is sent to state court, Shroeck said, Enbridge could appeal that decision, therefore sending it to a federal court of appeals, whereafter it could be years before a decision is reached. In the meantime, Enbridge would be able to continue operating without penalty.

The U.S. portion of the pipeline that crosses under the Mackinac straits is the worst possible location in the Great Lakes for an oil spill. A 2016 study by researchers at the University of Michigan found that because of the turbulent waters and switching directions of the current, a Line 5 oil spill could potentially contaminate more than 700 miles of Great Lakes shoreline.

In early March, Whitmer released an energy security plan that addresses how to get propane to Michiganders without Line 5. It includes strategies to prevent price gouging and increase bill assistance for vulnerable families; use government resources to develop alternative sourcing options; monitor and address disruptions in the energy industry; and maximize energy efficiency while reducing the cost to Michigan consumers.

Enbridge told Grist it found Whitmer’s plan “wholly inadequate for replacing the propane or energy supply Michiganders currently depend on.” Activists, however, are more supportive. “The only real crisis that we have to worry about with Line 5 energy sources is if it’s shut down because of [a] pipeline rupture, and there’s no orderly plan,” said Holtz, of the group Oil and Water Don’t Mix.